For the wives and partners of local Freemasons the annual Widnes Group Quiz Night is one of the many social events where everyone can get together and have a great evening with their family and friends.  The 2019 Quiz Night was no exception; it had a bar, refreshments, entertainment, a raffle, bingo, numerus prizes and a chance to test and show off one’s general knowledge in a fun environment. 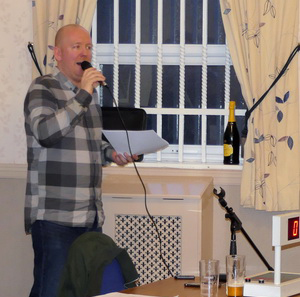 Quizmaster and MC Mark Pedder at the mic.

In some ways it was a family affair as it was organised by Neil Pedder (Widnes Group Chairman), his lady Liz Pedder who provided an excellent buffet, and son Mark Pedder who was the quizmaster and compere for the evening.

The evening started with everyone socializing at the spacious bar in Widnes Masonic Hall before making their way into the main hall, which had been laid out and prepared for the quiz. The quizmaster’s table was at the front together with a PA system and throughout the hall tables were arranged to accommodate teams comprising of 4 to 6 players.  Without a formal table plan everyone was free to sit wherever they liked. It was not long before the hall was full with everyone seated and waiting for the festivities to begin.

With everyone seated a quiz booklet containing 75 questions and/or spaces for answers was given to each team.  Some questions could be answered immediately, others that had to be answered once the quiz had started. There were general knowledge questions, visual questions such as guessing the nationality of various flags, 10 dingbats, audio questions where snippets of song introductions were played over the PA, and of course riddles that ranged from easy to ultra-challenging.  As soon as each table had received their booklet it was pawed over by team members desperate to make an early start.

Quizzes change people. Sometime the most mild-mannered become competitive junkies, other times people just go silent with uber-concentration.  What was common to each table was the phrase: “It’s on the tip of my tongue”’ this was heard throughout the evening. The real challenge was not to blurt out an answer in case teams sitting on nearby tables could hear and copy the answer. Yes, these things have been known to happen! 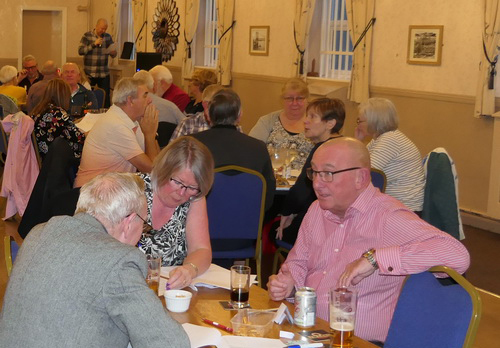 Pictured from left to right, are: Jim Carmichael-Prince, Liz and Neil Pedder.

Here is a small sample of questions taken from the quiz.  Answers are given at the bottom of the page.

Risk or reward section
27) In which US city is the Sears Tower?
A – San Francisco, B – Boston, C – Chicago

Sport
37) Which country won the first ever World Cup?

Round Robin
52) Which bird lays the largest eggs? 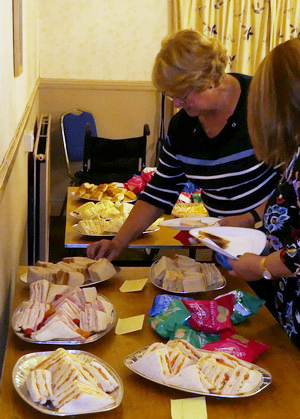 There was also an interval during the evening where everyone could take refreshment, eating as much as they liked from a fabulous buffet prepared by Liz. A great selection of home-made sandwiches as well as crisps, sausage rolls and quiche, not to mention cheese and grapes. No food was left at the end of the evening, which was testament to the wonderful spread provided by Liz on the night.

The raffle was drawn with the prizes being a good selection of drinks. At the end of the quiz came the marking of the papers. Teams exchanged papers and in the case of any dispute the final decision would rest with Mark, the Master of Ceremonies for the evening. The first prize of £50 was awarded to the Kingsman team, members comprising of Tracy, Katie and Ian Lynch with a second prize of £30 to the runners up. There was also a bottle of Prosecco as a booby prize for the lowest scoring team!

It was not just the teams and competitors who won prizes, at the end of the evening a total of £207 was raised for the Masonic Charitable Foundation. Everyone had an enjoyable time and are looking forward to next year’s Quiz Night.

Answers to the sample quiz questions