Now celebrating 145 years since its foundation in 1875, Liverpool Lodge No 1547 was pleased to welcome Assistant Provincial Grand Master Kevin Poynton as principal guest to their annual installation ceremony. The meeting which was held in the Adams Suite of Liverpool Masonic Hall on Hope Street was first opened in due form by the WM Tom Hough. He was ably assisted by his wardens and director of ceremonies Jack Parker. 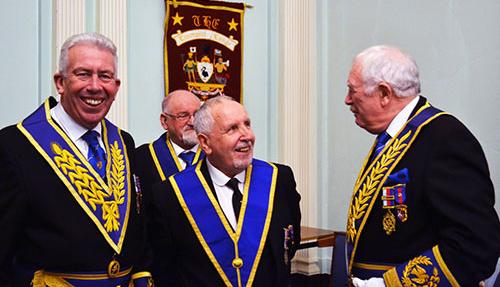 Waiting on a happy event. Pictured from left to right, are: Mark Matthews, Colin Svenson, Bernie Ashley and John Roberts.

On completing the opening business, the lodge admitted Kevin Poynton, who on this occasion was accompanied by The Chairman of Liverpool Group Mark Matthews, Liverpool Hall Chairman John Roberts and three acting Provincial grand officers. These were Provincial Junior Grand Deacon Norman Lay of Lodge of Loyalty No 86 in Prescot, Provincial Deputy Grand Sword Bearer Brian Boothroyd of Victory Lodge No 4629 in Widnes and Provincial Grand Steward John Shaw, a member of Ancient Briton Lodge No 1675.

Kevin was warmly welcomed by Tom Hough on behalf of the lodge, before taking the opportunity to thank the brethren of the lodge for all their support and assistance during his tenure. It had proven to be a wonderful experience and he knew that the same would be extended for the coming year.

With Tom continuing in office this was proclaimed by the director of ceremonies Jack Parker. Jack also presented the working tools of the third degree, with Gareth Rogers those of the second, while those of the first degree were likewise presented by Bernard Ashley. Later, special mention was given with regard to the exceptional way Gareth Rogers had presented and explained the second degree tools, reciting the extended version.

After the officers for the forthcoming year had been invested, John Roberts addressed the wardens. As is customary, it was the principal guest, Kevin Poynton who gave the address to the brethren of the lodge.

Tom’s first duty as master was a pleasant one, as he presented two cheques to Kevin on behalf of the lodge, one in favour of the West Lancashire Freemasons’ Charity for £200, the other to the Liverpool Masonic Hall building fund for £100. Kevin thanked Tom and the brethren of the lodge for their generous donations.

Throughout the evening, the lodge had set a sterling example of how a proclamation ceremony can be shared amongst its members, while making them all feel involved. It was an absolute credit to all who took part.

After closing the lodge, the brethren moved into the dining room to toast the health of the new master, before sitting down to an excellent festive board. As to be expected, it turned out to be a lively and convivial affair in the best traditions of Liverpool Lodge.

It was here that the opportunity was taken by Kevin to offer his own personal congratulations to Tom and to wish him and his officers the very best of health and that he may enjoy what he hoped would be a very busy and happy year in office. In addition, Kevin made a point of celebrating the work of Bernie Ashley and the other members who had taken part in the ceremony, particularly the brethren who had presented the working tools. Prior to their departure both Kevin and Mark each received a floral bouquet for their respective wives from the members of Liverpool Lodge.