Many brethren and guests of Lever Park Lodge No 8144 gathered to celebrate the installation of Russell Butler into the chair of King Solomon. 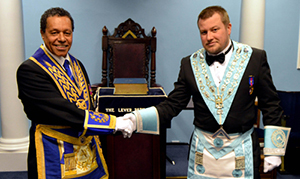 For the installation the brethren were greatly honoured by the presence of Andrew Wiltshire as their principal guest, representing the Provincial Grand Master Tony Harrison. Andrew was accompanied by Chorley Group Vice Chairman Peter Allen, along with many acting Provincial grand officers and Chorley group officials.

After the lodge was opened in the usual fashion and the normal business of the lodge had been conducted, Andrew, along with the group officials and the acting Provincial grand officers were admitted and the ceremony of installation was then conducted by the outgoing master Vincent Baldwin, who went on to carry out a most sincere and heartfelt ceremony, much to the delight of all the brethren who were in attendance.

Vincent was very ably assisted by past master of the lodge Derek English who performed the proclamations to the new master with great feeling and ability. The whole ceremony was under the watchful eye of the director of ceremonies Mark Arrowsmith.

Ray Goth (left) singing and toasting the new master at the festive board.

Lever Park Lodge is one which always has a steady stream of new and junior members whom the more experienced members try and engage in ceremonies – and the occasion of the installation was no exception with the working tools in the three degrees being presented by Paul Webb undertaking the third degree, Ian English (a fellow craft) the second and Alex Forbes (an entered apprentice) the first, all of which were extremely well delivered.

Following the appointment of the lodge officers which included the newly invested senior warden Clive Butterworth and junior warden Geoff Gorner, the addresses to the master and wardens were presented by Ray Goth and John Ball respectively and finally the address to the brethren of the lodge was given by Andrew Wiltshire. 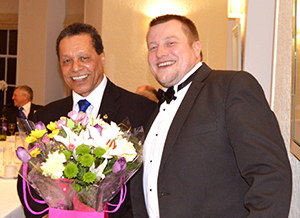 Russell (right) presents Andrew with a bouquet at the festive board.

As is traditional on such occasions, Andrew brought greetings and best wishes from the Provincial Grand Master who wished all those in the lodge health, strength and happiness and went on to congratulate Russell on becoming master of the lodge and complimented all the brethren who had taken part in what he described as a very sincere ceremony, making special mention of the two ‘junior’ brethren who presented the working tools.

In reply, Russell thanked Andrew for his kind words and went on to present him with two cheques as donations of £800 for the Masonic Charitable Foundation 2021 Festival and £200 to the Horwich Masonic Hall. In response Andrew thanked the brethren of Lever Park Lodge on behalf of those who will ultimately benefit from their generosity.

The usual spirited Level Park Lodge festive board followed, consisting of fine fare, a warm and relaxed atmosphere and the friendly and spirited manner in which the members and visitors of Lever Park Lodge enjoy themselves on such occasions. Roy Goth sang the master’s song, as he does every year, which was well received by all present.

Russell’s final pleasant duty of the evening was to present Andrew with a flower arrangement for him to take home to his good lady, which Andrew was very appreciative of.