South Liverpool Lodge No 2681 was formed in September 2009 by the amalgamation of Queens Lodge No 2681, Temperance Lodge No 2714 and Uranus Lodge No 6485. Meeting at Garston Masonic Hall, it held its installation meeting to install Ian Yoxall once again into the chair of King Solomon, a third term in this principal office for Ian. 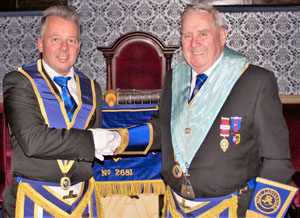 The lodge was opened with grand officer Peter Williams in the master’s chair, where he was assisted by the officers of the lodge. As Peter explained, this was to allow for a fitting welcome to the current WM Peter Armstrong on his first attendance to the lodge since receiving his appointment in Provincial Grand Lodge to the office of Past Provincial Senior Grand Deacon.

With the WM now in his rightful chair, the brethren stood in quiet contemplation in respect for Garston Group mentor Danny Wilson, who sadly passed on to higher service during the summer recess. Lodge DC Hughie O’Neil then announced that David Anderton, the representative of the Provincial Grand Master Tony Harrison, accompanied by Garston Group Chairman John Murphy, grand and Provincial grand officers sought admission. With the distinguished brethren duly admitted and welcomed, Peter then called on the presenting officers. This was the opportunity for a very proud father, Derek, assisted by his close friend Herbie Fennings, to present master elect, Ian.

With the lodge opened in the third degree the respective salutations were offered. Peter then asked the brethren of South Liverpool Lodge to line up in the north for him to offer very warm and sincere thanks for all their help and support during his year in office.

It was now time for Ian’s installation and the WM asked Peter Williams to retake the master’s chair and conduct the ceremony. Peter called on John Jackson and Ron Stanton to occupy the respective duties of senior and junior wardens with Les Cairns continuing as inner guard.

The ceremony was conducted with assurance, calm and dignity with DC Hughie ensuring a smooth flow to the proceedings. Hughie also found the time to deliver an explanation of the working tools of an installed master to Ian, with Peter Armstrong, John and Ron respectively presenting the third, second and first degree tools. 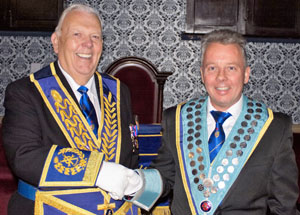 Ian continued by investing the officers for the ensuing year and it was very pleasing to see three ‘light blues’ appointed as stewards. The address to Ian was beautifully delivered by Ron, before the hard-working Hughie delivered the address to the wardens in his usual calm and sincere fashion. Dave Anderson then stood to present the address to the brethren of the lodge with equal aplomb.

At the conclusion of the installation, Dave once again stood, this time to offer the congratulations of the Provincial Grand Master Tony Harrison. Dave said he had been instructed by the PrGM to offer his best wishes and congratulations to Ian and the brethren. He continued by saying, that had he been present, Tony would no doubt have commented on a job well done by all those who had taken part in the evening’s ceremony.

With the grand and Provincial grand officers having now retired from the lodge, the remaining routine business was concluded and the brethren gathered in the dining room to enjoy the festive board. During the festivities and in response to the toast to Grand Lodge, Dave informed the brethren that this was his first visit to South Liverpool Lodge, and he continued by offering his own congratulations to Ian and all those involved in the ceremony and his delight in seeing a father presenting his son for installation. He then made special mention of three very important points. The first was membership, which he said, was a responsibility of us all, not just the membership officers. The second point Royal Arch, which he said, was the completion of speculative Freemasonry and is integral to an understanding of Freemasonry in general. His third point was the MCF 2021 Festival and its work, once again thanking the lodge on their donation and achievement. He then informed the brethren that last year the dependents of our Province had benefitted by grants of over £1,000,000 from the charity.

Concluding an enjoyable evening was the announcement of a further £200 being raised in support of charity, before Ian presented Dave and group chairman John, with gifts of flowers for the enjoyment of their respective ladies.