The brethren and guests of Wilderswood Lodge No 5932 gathered in the wonderful surroundings of Ridgmont House (Horwich Masonic Hall) to celebrate the installation of Paul Mullineaux into the chair of King Solomon for the second time in five years and the fourth time in his Masonic career. 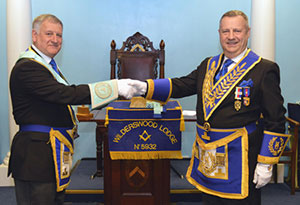 The installation ceremony was conducted throughout by the outgoing master Peter Schofield under the watchful eye of director of ceremonies David Harrison, both of whom are long established members of Wilderswood Lodge. 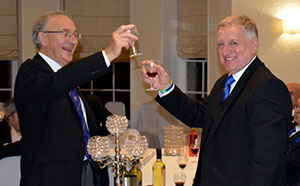 In the lodge, the working tools were very ably presented by Gary Longthorne and David Perfect. The address to the master, wardens and brethren were given respectively by David Harrison, John Parr, and Peter Lockett.

This was followed by the investiture of the lodge officers which saw many brethren taking on multiple offices.

As is traditional on such occasions, Peter brought greetings and best wishes from the Provincial Grand Master Tony Harrison who wished all those in the lodge health, strength and happiness. 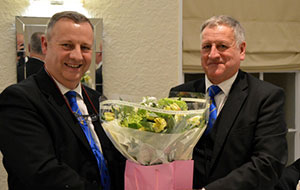 Paul presents Peter with a bouquet during the festive board.

In reply, Paul thanked Peter for his kind words and went on to present him with a cheque for £500 to the Masonic Charitable Foundation 2021 Festival which along with other donations now awards Wilderswood Lodge Vice Patronage of the Festival. Peter thanked the lodge for this generous donation on behalf of the Festival and on behalf of all those who will ultimately benefit from it.

The usual Wilderswood Lodge festive board followed, consisting of fine fare, a warm and relaxed atmosphere and the friendly and spirited manner in which the members and visitors of Wilderswood Lodge enjoy themselves on these occasions.

A raffle was held with many prizes on offer ranging from a box of licorices to a bottle of gin, which raised £110 for good causes.

Paul’s final pleasant duty of the evening was to present a gift of flowers to Peter to pass on to his wife.

Paul Mullineaux with Peter Lockett and other grand and acting Provincial grand officers, group officers and the lodge officers.