“I am delighted to be here on what is my first representation”, said Provincial Grand Senior Warden John Karran, as he was warmly welcomed to the installation meeting of Lodge of Furness No 995. 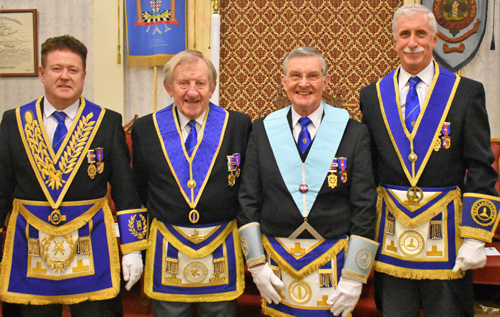 “What a co-incidence” was the cheerful response of outgoing WM David Jennings, “it is my last!”

That set the tone for what was a very enjoyable ceremony in a packed temple at Ulverston Masonic Hall.

The grand officers present, Chris Band, Rowly Saunders, Alan Jones and group chairman Peter Schofield, were joined by acting Provincial grand officers Barry Fitzgerald, David Dutton, Reg Wilkinson, Barrie Bray and Graham Dowling. Special mention is merited in the case of David Dutton, who had made the journey up from the Woolton group, in the far south of the Province, to the northern extremity, for the occasion.

Although it had been the first time that David Jennings had occupied the chair of the lodge, he had previously enjoyed that honour in a lodge in Cheshire. Likewise, his successor Jim Richards, was fresh to the position of WM of Lodge of Furness, but he had in the past served two years as head of Newby Bridge Lodge No 4598 and also a term as WM of Plantagenet Lodge of Installed Masters No 9357, in the adjoining Lancaster group.

Former Furness and South Lakeland Group Chairman Rowly Saunders, had proposed Jim as a joining member of the lodge and it was fitting that he should present him for the purposes of installation.

Jim was installed in fine style by his predecessor in a ceremony that was a delight to behold.

The deacons were informed as to their duties by David Dutton.

Lodge of Furness is the proud possessor of a Hallstone jewel and lodge stalwart Peter Thompson explained its significance before investing Jim with it.

Chris Angell, Ian Benn and Keith Lancaster, all of whom wear light blue, received great plaudits for their skill in presenting the working tools of the three degrees.

There was a further grand officer in attendance, in the person of lodge director of ceremonies Barrie Crossley, who was given great credit for the manner in which his charges had gone about the presentation of the ritual. Due acknowledgement was also made of the part secretary Ronnie Angell had played in ensuring the smooth running of the proceedings.

To mark the occasion, John was presented with a donation of £500 for the MCF 2021 Festival. He also received a further cheque in the sum of £917.50 in favour of Ulverston Masonic Hall. The premises have recently seen an extension added, disabled access improved and part of the roof re-slated. There is more internal work underway and the money will be well used.

Lodge member and group charity steward Richard Wilcock, was on hand to relieve John of the festival cheque and also announce that the £500 would be matched with a further cheque from the group charity account of £500, meaning that Lodge of Furness would be credited with £1,000 towards future patronage.

Following the formalities of the ceremony, a trip was made to the Olde Mill at Bardsea, on the coastal road skirting Morecambe Bay, where 104 members and their guests enjoyed a superb three course meal.

David Jennings, in proposing the toast to the health of Jim, took the opportunity to inform the assembled diners of the great pride he had had in representing the lodge at a special meeting of Victoria Rifles Lodge No 822, held at Freemasons’ Hall in Great Queen St, London.

Freemasons’ Hall was constructed as a lasting monument to those who made the ultimate sacrifice in the Great War, the financing of which was supported by those lodges who now wear the Hallstone jewel. It is the largest memorial to the fallen in London.

The event took place on the eve of Armistice Day, when the lodge hosted ‘An Armistice Centenary Meeting’. It was also the installation meeting of the lodge and when it came to the presentation of the Hallstone jewel, 500 visiting masters, including David, stood in unison.

It proved a memorable and moving event with which to mark the end of hostilities 100 years ago. A full report of that meeting, which is well worth reading, can be found at the online edition of Freemasonry Today.

In replying to the toast to his health, Jim, who had been the first group membership officer, had found that during his five years in that role, the most common reason given for men wishing to become Masons was to make new friends. Although an experienced Mason, he looked forward to again making new friends particularly amongst his colleagues in office during his year.

There was however a note of caution from Jim. He pointed out that Mark Little, WM of Newby Bridge Lodge, Phil Burrow WM of Hawkshead Lodge No 4354 and himself, were all members of Newby Bridge Lodge. As this lodge has a well-deserved reputation for sweeping up the prizes at raffles, the other masters in office may find it difficult to oust the trio from the prize table in the coming months!

A raffle at the dinner raised £542.50 for the hall building fund, to which the masters in office added a further £22 raised from a sweepstake on the length of John’s reply. The diners of table B, under duress from the group publicity officer, dug deep and managed to scrape together a further 50p to round the total up to £565!

Lodge of Furness can once again reflect on a wonderful installation meeting, carried out with due compliance to all the ceremonial protocols, followed by an excellent evening of good food and fine company. 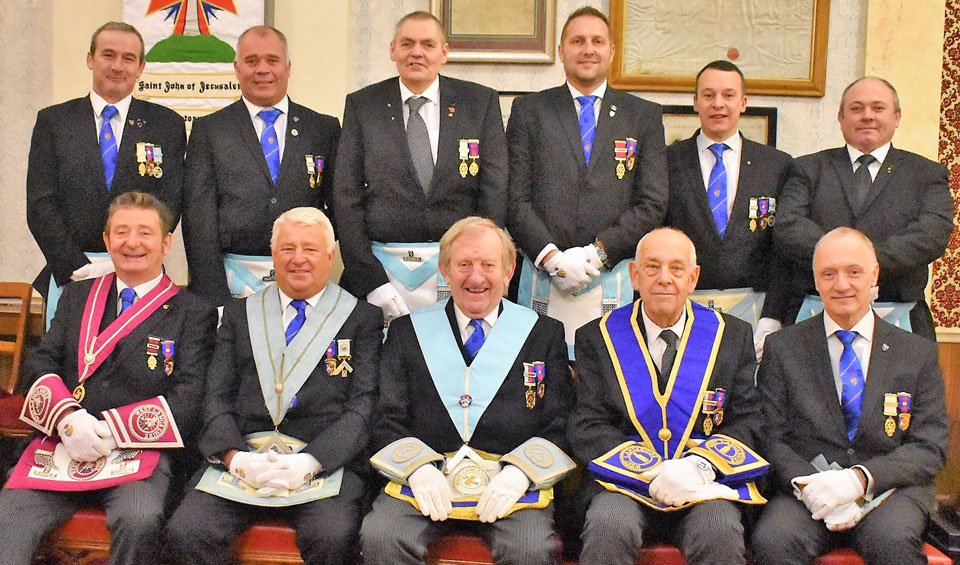 Pictured; seated front centre is David Jennings with some of the visiting masters.