Bill Edmonds welcomed Assistant Provincial Grand Master Derek Parkinson to the top of the Province for the installation meeting of Lonsdale Lodge of Installed Masters No 9422. 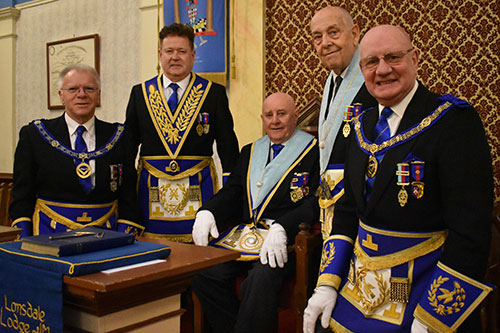 The gathering at Ulverston Masonic Hall saw 85 members and their guests assemble to witness Frank Pearson being installed as Worshipful Master on this important annual occasion. Frank is a past master of Dalton in Furness Lodge No 6828.

Amongst the eleven grand officers in attendance were local APrGM David Grainger, group chairman Peter Schofield, Provincial Grand Director of Ceremonies Keith Kemp and Norman Thompson who is the former head of the adjoining Province of Cumberland and Westmorland.

In addition to the aforementioned distinguished brethren there were a further six acting Provincial officers adding further lustre to the occasion in the persons of Barry Fitzgerald, Phil Preston, Reg Wilkinson, Barrie Bray, Graham Dowling and Steve McKellar.

On the face of it, the process of one experienced past master conducting another of that ilk into the chair of a lodge should be a relatively straight forward affair. Indeed Bill did make it look as though that was the case as he went about his duties in the assured, accurate and amiable manner one associates with this noted ritualist. However I doubt whether he actually found it quite as undemanding and stress free as he made it appear, as the presence of so many of his seasoned and knowledgeable peers casting a watchful eye over his work cannot have but added extra pressure to his role.  It was a job very well done and fully deserving of the plaudits he later received from Derek.

Tony Cassells was called upon to present the working tools of an installed master whilst Harry Chatfield, Mort Richardson and Robert Durkin undertook a similar role in respect of the tools of the three degrees. All played their part well.

Frank had been presented for installation by Furness and South Lakeland Group Chairman Peter Schofield in accordance with the traditions of the lodge. Those same traditions dictate that he also undertakes the address to the newly installed WM and that group vice-chairman Gary Rogerson performs a similar role in respect of the wardens. Both did so to good effect.

Being an installed masters’ lodge, with many prominent figures amongst the 85 members, Lonsdale Lodge usually attracts a chain bearer as the principal guest at the installation meeting. As is the custom an invitation is extended to the principal guest to orate the address to the brethren. Over the years that address has been recited by many notable Masons but it has never become stale as each has developed their own style to use when delivering those words which originate from the same script.

Once again that proved to be the case as Derek displayed his own individual style with the emphasis, tone, nuances, infection and timing being different to those that had been heard before. It proved a great delight to listen to.

To mark the occasion a donation of £400 was made in respect of the Masonic Charitable Foundation 2021 Festival with a further £100 being given to the charity Lupus UK.

Following the formalities of the ritual the dining room was filled to capacity as those dining enjoyed a four-course meal with the menu being, beef.

Of course these thing have to be arranged and organised by the hard working lodge secretary. In this case that responsibility had fallen upon the shoulders of Terry Pearson who was later congratulated for his efforts.

The ceremonial side aspect of the evening had been under the supervision of lodge director of ceremonies Mike Jenkins. He is another who must have felt the stresses of a full room with the Provincial head of all matters ceremonial and one of his deputies being amongst the onlookers. He did not let the undoubted pressure get to him and he too received great plaudits for the work he had obviously put in. 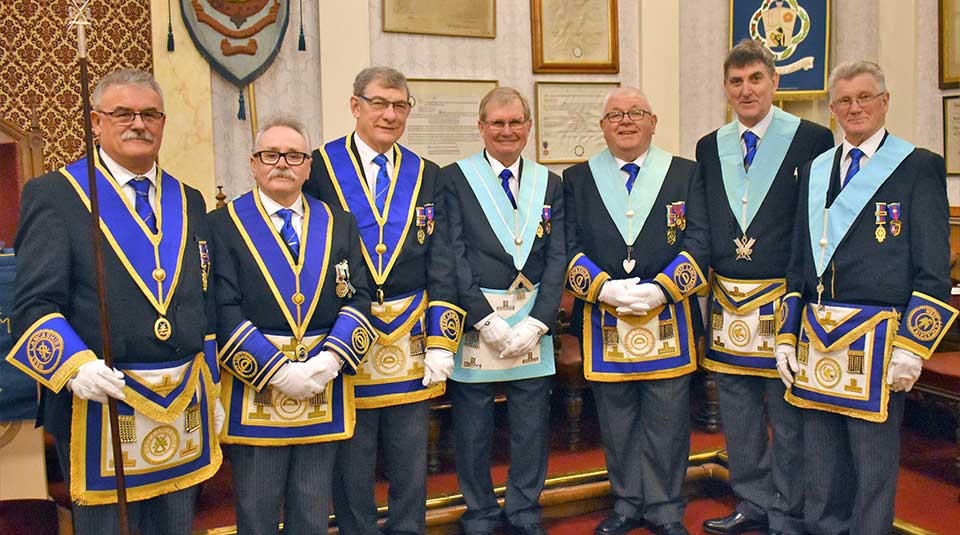