Assistant Provincial Grand Master David Winder was invited to the regular meeting of Lilford Lodge No 3022 to give a talk on the MCF 2021 Festival. David was accompanied by Provincial Grand Charity Steward Phil Preston. 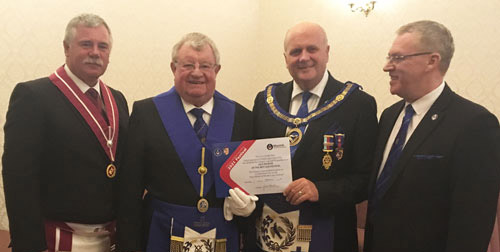 David stressed the importance of supporting the Provincial Grand Master Tony Harrison during the time we are in Festival and outlined to the brethren the benefits not only to West Lancashire Freemasons and their families but to the wider community in general.

The talk was well received by the members and six pledges were taken out on the night for Festival Jewels.

David then had the great pleasure of presenting the Chairman of Leigh Group Len Hart with a Vice Patron certificate for the Leigh Group and he hoped that he would be presenting more to lodges in the group over the period of the festival.