Following the very successful ladies evening, held by Adelphi Lodge No 6819, with raffles and tombolas raising a significant amount for the charities, Dave Douglas accompanied by Adam Bladen, visited the Neuro Muscular Dystrophy Centre in Winsford to present them with a cheque for £250. 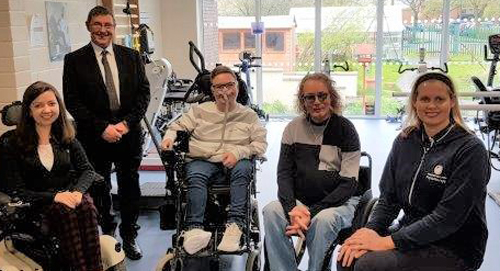 Dave Douglas (left) with staff and out patients.

An idea was adopted by the lodge members several years ago, that allowed the lady of the current master to nominate a charity to receive a donation from the charity fund. This year Irene, Dave’s fiancé’, chose the centre to be a recipient, as she has a friend whose son Adam suffers from the condition ‘Ducheene MD’ and attends the centre.

A meeting was arranged with the fund-raising managers Theresa Tansey and Millie Hawkes at the centre. Dave, accompanied by Adam, met the fundraising team, members of staff and many of the out-patients. After presenting the cheque, he was then given a tour of the centre which he found both interesting and informative. It gave him an insight into the activities and treatment which offers relief to the sufferers of this very disabilitating condition. A large physio room leads into a specialist gymnasium packed with motorised equipment, allowing patients to have muscles exercised that they could not normally perform by themselves.

The centre is funded partly by donations, such as the cheque presented on the day. The fund-raising team who organise events throughout the year, together with a team of volunteers and part time paid staff (all with some form of MD), produce artwork, posters and brochures for a variety of businesses and private individuals. The staff were all enthusiastic and keen to promote and praise their centre. The devotion shown is why the centre is such a great help to so many people, providing a footprint to be admired by many similar organisations around the world. That said, it is the hard work of the original founders and volunteers that is the reason for its success and that is the difficult part to replicate. This is why many have visited and tried to copy the example, but very few had been successful.

Dave came away from the visit inspired and full of admiration of the work being carried out and was very pleased that Freemasonary had been able to contribute , if only in a small way, to such a worthy cause!

As a result of the way it is inherited, Duchenne MD mostly affects boys. Girls can occasionally be affected, but the condition tends to be milder in females. Children with Duchenne MD usually start to have noticeable symptoms between one and three years of age. The muscles around their pelvis and thighs tend to be affected first and often appear bulkier than normal. A child with Duchenne MD may have difficulty walking, running or jumping, have difficulty standing up, learn to speak later than usual, be unable to climb the stairs without support and have behavioural or learning difficulties.

Children with Duchenne MD may need a wheelchair by the time they’re 8 -14 years old, as their muscles weaken and they lose the ability to walk. They can also develop scoliosis, where the spine begins to curve sideways. This can lead to one shoulder or hip being higher than the other. By their mid-teens, some people with Duchenne MD will develop dilated cardiomyopathy. This condition affects the heart muscles, causing the heart’s chambers to enlarge and the walls to get thinner. By their late-teens or early 20s, people with Duchenne MD may start to have breathing problems. The condition can also affect the intercostal muscles (muscle tissue between the ribs) and the diaphragm (the large, thin sheet of muscle between the chest and abdomen).  Once the heart and respiratory muscles are damaged, Duchenne MD becomes life-threatening. With medical care, most people with Duchenne MD die from heart or respiratory failure before or during their 30s.

More information about the work of the centre can be found at:- http://www.musculardystrophyuk.org/support-hub/near-you/services/the-neuromuscular-centre-winsford/

Dave Douglas (right) with staff and out patients.

Article and photographs by Dave Douglas.