Over 90 guests and brethren joined Grand Superintendent Tony Harrison and his Provincial team to celebrate the centenary of Chapter of Hope No 2679 at Elm Bank Masonic Hall Eccles. Tony was accompanied by Third Provincial Grand Principal Ian Higham together with many grand officers and acting Provincial grand officers. 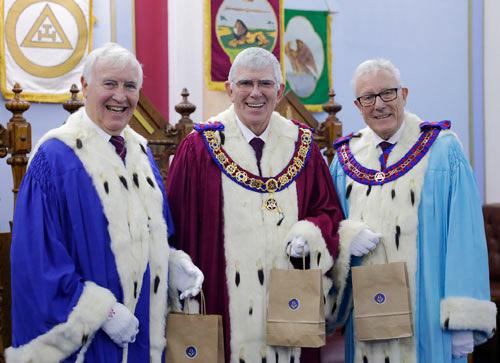 Tony was welcomed by Eccles Group Chairman Stuart Boyd who presented him with the traditional Eccles cakes.

On a report at the door of the chapter the grand officers were admitted along with the Eccles Group Chairman Stuart Boyd and they took their rightful places.

Following a further report, the PrGDC Paul Hesketh was admitted who announced the Grand Superintendent stood without and demanded admission. First principal Harry Cropper said that the chapter would be pleased to receive him.

Paul introduced Tony to Harry who gave him a very warm welcome and invited him to accept the sceptre of the chapter, which on this occasion he willingly accepted. Tony took the chair first principal’s and invited his Provincial officers to take up their respective positions before opening Provincial Grand Chapter. 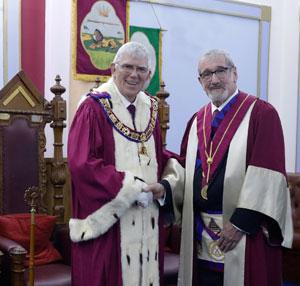 In his opening address to the chapter, Tony expressed his pleasure at leading the celebrations for what was a magnificent occasion and a wonderful achievement for the chapter in attaining its centenary.

Tony called upon the PrGSE Peter Taylor to read to the assembled brethren the centenary warrant commemorating the centenary and permitting and authorising the members of Chapter of Hope to wear their centenary jewel. Tony then formally presented the warrant and centenary jewel to Harry Cropper, who promised to keep and pass on the warrant to his successors pure and unsullied as he had received it.

Next, Tony called upon the Rev Godfrey Hirst, Clerk in Holy Orders, to deliver an oration and then to give a prayer of rededication to the assembled companions.

As the ceremony neared completion, Tony Harrison had one more surprise in store for the companions and one member of Chapter of Hope in particular in the person of Brian Lawrence. Tony promoted Brian to PPrGSN.

The National Anthem was sung and Provincial Grand Chapter closed. Tony then handed the sceptre back to the Harry Cropper and the three principals returned to their rightful places.

Tony and his team say farewell to the companions.

A shortened version of the chapter history was then read by the chapter scribe Ezra. At the completion of the history the grand Officers and the Provincial team retired.

Tony responded to the toast to his health by proposing a toast to Chapter of Hope and the officers and companions for all their work in planning the centenary celebrations.

He concluded by saying that he had thoroughly enjoyed the evening and long may the chapter continue to flourish.