It was an impressive turnout for the Wigan Group’s Masters and First Principals’ Festival at Bryn Masonic Hall, with leaders of all lodges and chapters packing the lodge room and later dining downstairs. The occasion followed a tried and tested format, with initial tea, coffee and biscuits with informal socialising, followed by a question and answer session. The panel consisted of Deputy Provincial Grand Master Phil Gunning, assisted by Mike Threlfall (Assistant to the Provincial Grand Principals with responsibility for the Wigan Group) and Peter Taylor (PrGSec and PrGScribeE), and of course they were ably supported by Geoffrey Porter (group chairman), John Selley (group vice chairman) and Chris Reeman (group secretary). Barry Fitzgerald (PrDepGDC) provided his usual skills to ensure the event ran smoothly, along with colleague Jason Dell. In addition, Provincial Senior and Junior Grand Wardens John Karran and Barry Dickinson completed the distinguished line up. 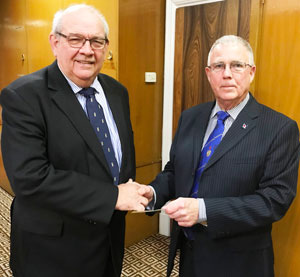 The questions in the Q&A forum were interesting and varied, which prompted the distinguished guests to explore and explain various topics, including the current MCF Festival, the issue of costs and reducing membership, recruitment, the future of the Province and some shared ideas to encourage success.

The forum being completed it was time to adjourn to the bar, where discussions carried on in little groups here and there, with a buzz of enthusiasm visually and audibly noticeable. The brethren were then ushered into the dining room, nicely decked out with white clad round tables, to receive the distinguished guests. A fine meal followed, with lots of chatter about the room. Barry Fitzgerald, ably assisted by Jason Dell, managed the proceedings with the usual formal toasts being taken. Phil Barr, IPM of Bryn Lodge No 6553, proposed the toast to Phil Gunning. Phil Gunning was pleased to respond, thanking Phil Barr for the generous toast to his health, and recognising and thanking all the group officers for their contribution to effective running of the Province. He congratulated everyone present who had received Provincial first appointments and promotions and hoped that they enjoyed their Masonry. He made a special mention of Harold Bibby, who is to be promoted to the elevated rank of PPrSGW.

Barry Dickinson, PrJGW, proposed the toast to the Wigan Group and Geoffrey Porter proudly responded, explaining about the group team and their achievements, and offering his thanks to all concerned. He also expressed his delight at having the DepPrGM as the principal guest, accompanied by so many distinguished colleagues. He was then delighted to present to Phil a cheque for £1,000 for the MCF 2021 Festival. As a Parthian shot, and in something of a Wigan tradition, John Selley was pleased to end the evening by presenting the guests with that world-famous local delicacy – Uncle Joe’s Mint Balls