This year’s ‘Ladies to Dine’, for members of Lodge of Israel No 1502 at Liverpool Masonic Hall, turned out to be an evening of unrivalled enjoyment and none more so than for Paul Hudson. After being opened in due form by WM Barry Elman, the lodge business was dealt with in a timely and efficient manner and on completion Barry then led the lodge members to the main banqueting suite where wives, partners and guests were waiting in anticipation. 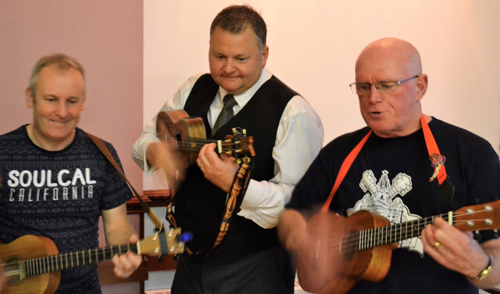 In the main banqueting suite, a varied selection of aperitifs were available for the brethren and guests on arrival, perfectly selected to satisfy all tastes. This was not unexpected, as Lodge of Israel has always been noted for extending an abundance of hospitality and for the warm welcome in which it excels. The highlight of the evening was the appearance of the band ‘D’ukes of Hazzard’, with the vast majority of its members playing on various types of ukulele. These can range from the ‘pocket’ sized at 16 inch, through soprano, concert, tenor, baritone, bass, and then to the contrabass at 32 inches. Epitomised by the great George Formby, the ukulele has become a very popular instrument today, partly due to its promotion by the comedian and raconteur Frank Skinner.

The star appearance for many in the Lodge of Israel, was that of Paul Hudson. Better known for his virtuosity on the banjo, Paul could just not resist the temptation of jamming along with the D’ukes. Playing a variety of popular tunes, this band of massed ukuleles went down a storm, receiving rapturous applause at the end of each set.

The evening was complemented by the excellent food, served throughout by the courteous hall staff. At the end of the evening, everyone was in agreement that it had turned out to be yet another outstanding event, raising much for charity from the raffle and bringing many friends, both new and old together.

The ‘D’ukes of Hazzard’ perform.