The new WM of Heysham Lodge No 4108 Torquil Forbes MacLeod is no stranger to the chair, having occupied the chair of King Solomon three times already. He was WM of Trinity Lodge No 6730 in the Province of Cumberland and Westmorland in 2000, 2001 and of Heysham Lodge in 2010. His experience was evident from the start and was truly portrayed in the comfortable manner in which he assumed the reigns of authority from the outgoing master Lee Tailor-Craddock. 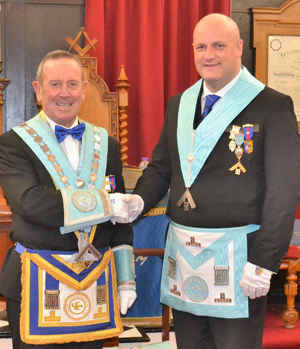 As this was an event not to be missed, around 100 brethren had gathered to witness Torquil taking the master’s chair for the fourth time. Torquil was presented as master elect by the lodge DC David Malcolm before Lee installed his successor in a very dignified and sincere manner befitting the occasion.

The working tools in the three degrees were delivered in a most memorable fashion by three of the ‘light blues’ from within the lodge; Michael Reeve (third degree), Darren Reeve (second degree) and James Unsworth (first degree). The addresses were of an equally high standard; that to the WM by Michael Brown, to the wardens by David Malcolm and that to the brethren of the lodge by Philip Gunning.

Following the appointment of the lodge officers for the ensuing year, Philip rose to bring the greetings of the Provincial Grand Master Tony Harrison to Torquil and the brethren of the lodge. He said that Tony would have been delighted with the occasion and would have wished to congratulate Lee, as the immediate past master and the rest of the brethren who took part, on a truly wonderful ceremony, particular the junior brethren for their exceptional delivery of the working tools. 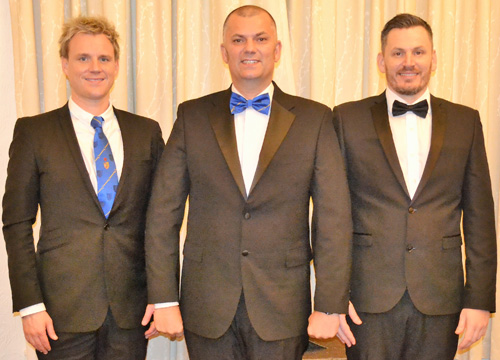 Upon completion of the lodge meeting, the brethren retired to Heysham Golf Club for welcome refreshment, before gathering in the dining room for the festive board. The festive board went with a swing (pardon the pun), following which, Philip responded to the toast to the grand officers. He began by praising all who had taken part in the installation ceremony, adding that it ‘was one of the best he had seen’.

Three of the visiting WM’s enjoying their evening; pictured left to right, are: Brian Warrington Torrisholme Lodge No 5245, David Emery Lodge Amounderness No 7105 and Daniel Crossley Wyreside Lodge No 2605.

Philip then took the opportunity to announce the retirement of David Grainger from his post as APrGM, who will be succeeded by Keith Kemp, currently the Provincial Grand Director of Ceremonies. Congratulations were proffered to both of them, which received a rapturous round of applause.

Philip then moved on to speak about the MCF 2021 Festival, the generous donations to charity he had witnessed in the lodge room earlier, the benefits of joining the Royal Arch and the impending move of Provincial Grand Lodge from their current home at Wellington Park, Leyland. Another important topic was how the WLFC was sponsoring PSA tests, which help detect prostrate cancer and which are freely available at Provincial meetings. If found early enough prostate cancer can be successfully treated and a number of brethren from around the Province have been detected with this cancer are now on the road to recovery. Philip concluded by wishing all the brethren of Heysham Lodge a successful and happy year ahead.

A very interesting toast to the master was given by the ever-resourceful lodge DC David Malcolm, following which the brethren and the new WM were treated to a suburb rendition of the master’s song by Simon Almond accompanied by David Tattersall. In response Torquil expressed thanks to all who had assisted in making the occasion go so well and promised to ‘do his best’ to repay the trust the lodge had shown in him.

A very fitting conclusion to the evening came with the announcement that the amount raised from the raffle on the evening was £493. This together with the £55 donated from the ‘masters swindle’, will be donated to charity.