It was a very special occasion for Crosby Lodge No 3714 at their installation meeting, held at the Litherland Masonic Hall. The brethren were proud to give a very warm welcome to their guest of honour for the ceremony, Provincial Grand Master Tony Harrison. 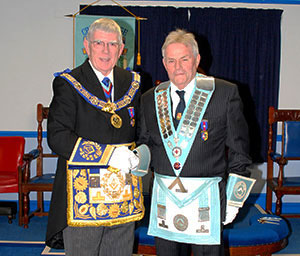 The outgoing and installing WM Andreas Johannessen started the evening’s proceedings by warmly welcoming the visiting brethren to the meeting, before opening the lodge and completing the initial lodge business. Andreas then opened the lodge to the second and third degrees, whereupon the Provincial Grand Director of Ceremonies was admitted into the temple and announced that the PrGM was without and demanded admission. Tony was then admitted into the temple accompanied by an impressive escort.

Andreas then warmly welcomed Tony to the ceremony and offered him the gavel of the lodge, which Tony gracefully declined.

Once the procession was seated Andreas, asked John Karran, the Provincial Senior Grand Warden to act as installing SW. He then asked the Provincial Junior Warden Barry Dickinson if he would take the chair of JW.

The master elect, Eric Moran, was then presented to the lodge by the presenting officers Mark Sands and Tom Croll. After Eric had taken his obligation, the outgoing WM thanked the brethren for all their support and hard work they had given him during his year in office. 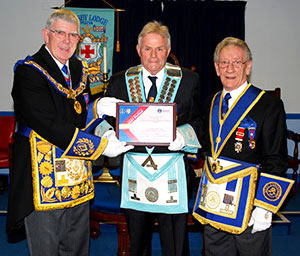 Andreas then proceeded to install Eric, according to ancient custom into the chair of King Solomon. The working tools for the third degree were presented by Ron Elliott, the second degree tools by Matthew Caffrey and the first degree tools by Russell Simmons all delivered in an excellent and faultless manner.

At the end the ceremony of installation, Tony stood and gave his personal congratulations to Eric in attaining the chair of the lodge, saying that he hoped Eric would have a busy and happy year in the chair. Firstly, congratulating Andreas for the excellent manner in which he had installed Eric into the chair, Tony then congratulated all the brethren who had been involved in their respective roles during the ceremony.

The ceremony completed, Eric presented Tony with six cheques; £1,375 for the West Lancashire MCF 2021 Festival, £200 to the West Lancashire Freemasons’ Charity, £300 to the Litherland Masonic Hall, £200 to Tithebarn, £100 to the 12th Crosby Scouts Group and £200 to FROTH. Tony thanked the brethren of the lodge for their very generous and worthy donations, before having the privilege to present the lodge with their Patron’s certificate for the 2021 Festival.

Pictured left: Tony responding to the toast to his health. Pictured right: Eric Moran (right) presents Tony Harrison with a bouquet of flowers for Maureen.

After closing the lodge in prayer and harmony the brethren made their way to an excellent festive board which was enjoyed by all. During this, a raffle was held which raised £375 which will be donated to charities at a later date.

In response to the toast to his health Tony thanked and congratulated Eric again for becoming WM, the brethren who had been involved in organising the night and the brethren who performed in the ceremony. Tony also thanked the Provincial team who had accompanied him to the ceremony that evening and during the year, Tony hoped they all had enjoyed their year in office.

Tony spoke to the brethren about attracting new members and promoting the Royal Arch to brethren within Masonry who are not members, Tony thanked again the brethren of Crosby Lodge for their charitable donations to the MCF 2021 Festival, before thanking all the brethren for the standard of the ceremony and for the hospitality that had been shown to the Provincial Team and himself.

With the evening coming to an end, a presentation was made to Tony on behalf of the lodge for his wife Maureen of a large bouquet of flowers and with the evening drawn to a close the brethren retired to go home, after having an enjoyable ceremony and festive board in good company and lots of jovial fun.