In 1996 Tom Egan was installed as the master of Ashlar Lodge No 5154 and after a gap of 22 years he became master again. The evening was a wonderful demonstration of ceremony and ritual masterfully conducted by the outgoing master Bill Farrington. 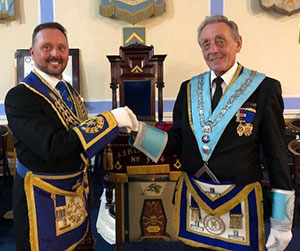 Bill opened the lodge with his usual confident manner and at the correct moment in the proceedings the director of ceremonies, Mike Thompson, retired to escort the visiting dignitaries into the lodge. The brethren were delighted to receive Neil MacSymons, who was on the evening representing the Provincial Grand Master Tony Harrison. He was accompanied by fellow grand officer John Turpin Blackpool Group Chairman, together with acting Provincial Grand Steward John Pitches.

Tom was then presented as master elect by Michael Wigham for installation into the chair of King Solomon. The ceremony of installation was performed in a dignified manner befitting the occasion by Bill. To watch Tom being installed for the second time over 40 brethren had gathered to support him on this marvellous occasion. The working tools in the three degrees were delivered by Chris Walpole, Reshpal Bilkhu and Neil Thomson in an exemplary fashion. After presenting Tom as master elect Michael then went on to deliver the address to the master, a great way to bookend the ceremony. The address to the wardens was delivered in his usual relaxed manner by David Cook, group vice chairman, and the address to the brethren of the lodge was given with great presence by Neil MacSymons.

Once all the officers for the ensuing year and been appointed and invested, Neil MacSymons rose to bring the greetings of the Provincial Grand Master to Tom and the brethren of the lodge. He said that the Provincial Grand Master would have been delighted with the occasion and would have wished to congratulate the immediate past master and installing master, Bill, and the rest of the brethren who took part, in particular Neil Thomson for his delivery of the working tools. Neil MacSymons then thanked the brethren for their generosity when Bill presented him with cheques for £500 to go towards the Masonic Charitable Foundation 2021 Festival, £250 for the West Lancs Freemasons’ Charity, £125 for Bryan House, £125 for Street Life, £755 for Rosemere, West Lancs Bowling for £20 and West Lancs Clay Pigeon for £15, a grand total of £1,790.

Upon completion of the rest of the lodge business the brethren retired to the bar and then after brief period of relaxation gathered in the dining room for the festive board. At the festive board, in response to the toast to the grand officers, Neil congratulated the new master and the members of the lodge on a fine ceremony. Turning to the Masonic Charitable Foundation 2021 Festival, he thanked the brethren for their continuing support of the Masonic Charitable Foundation. Neil also suggested that those brethren who were not already in the Royal Arch to consider it when they were ready, as it was a vibrant degree which they would find completed their Masonry.

The festive board was enjoyed by all and Bill gave the toast to the new master in an exemplary manner and this was followed by a superb rendition of the master’s song by Ian Benson accompanied by the infamous ukulele player and organist, George Holden. Tom gave an impassioned response to Bill’s toast thanking him for his kind words and thanking all the brethren for their work that evening in lodge room. The night drew to a convivial ending and everyone was in no doubt that for the second time Ashlar lodge would be safe in Tom’s hands.

The brethren of Ashlar Lodge, together with their guests.