The reputation of Semper Fidelis Lodge No 4428 as a uniquely hospitable lodge with excellent ritual at all times was maintained at its installation meeting. Brethren attending the event were expecting wonderful things and they weren’t to be disappointed. 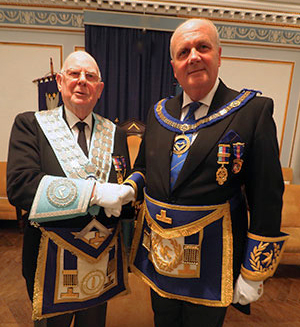 The lodge was opened by Brian Buckle and the business was hastily despatched. The business included a ballot to elect Peter Wilkinson, formerly of Melita Lodge No 6783 and Setantia Lodge of Installed Masters No 7755, as a joining member which proved successful.

Having been welcomed into the lodge by Brian Buckle, David Winder was offered the gavel which he accepted and promptly returned, feeling sure that the installation team would be excellently led. Salutations were led by Barry Fitzgerald to David Winder, Past Assistant Provincial Grand Masters, grand officers and Provincial grand officers, all of which received appropriate responses. 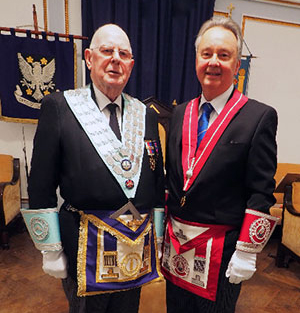 Brian Buckle invited Steven Reid to take the chair of the lodge for the purposes of installation. Installing officers Paul Cowan, Roger Walker and Mike Hornby were then appointed. The master elect, Brian Buckle, having agreed to serve a second consecutive year in the chair, was presented by Mike Taylor. After a special introduction and declaration ceremony by Steven Reid, Brian was duly installed into the chair in fine style. The brethren in the subordinate degrees saluted and greeted Brian in the three degrees and the working tools were presented. The Hall Stone Jewel was excellently presented and explained by Alec Sugden.

As the lodge officers were invested, excellent addresses were delivered by Steven Reid to the newly proclaimed master, Ian Ward to the charity representative, John-Robbie Porter to the deacons, Steve Carr to the stewards, Mike Hornby to the inner guard and the hard-working Steven Reid to the tyler. The final address of the ceremony, which was to the brethren of the lodge, was delivered by David Winder in his unique authoritative style.

After this David conveyed the congratulations of the Provincial Grand Master Tony Harrison. As ever, David went walkabout, thanking everyone who had taken part with a uniquely personal compliment to each participant. During the closing Ian Ward conveyed the congratulations of the grand officers, describing the event as a ‘thoroughly enjoyable evening’. Nigel Bradshaw, responding for the Provincial grand officers thanked all involved for a truly excellent ceremony. The lodge was closed and the brethren retired to the banqueting suite to enjoy a fine five-course meal. 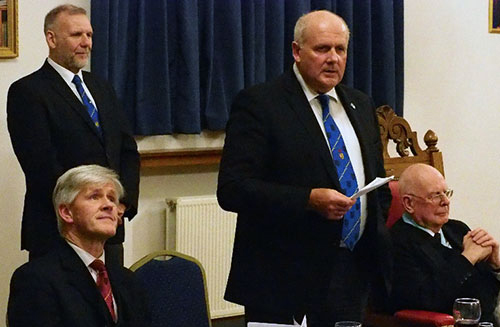 David Winder (centre right) responds to the grand officers’ toast at the festive board.

Responding to the senior warden’s toast to the grand officers, David Winder opened by thanking all of the grand and acting Provincial grand officers for supporting him at the meeting. He spoke of the progress of the Masonic Charitable Foundation 2021 Festival. He asked that brethren continue to support the festival and urged anyone who hadn’t already signed up for patronage to do so. David described the ceremony of installation as a wonderful ceremony with real meaning and the members of the lodge got hold of it and made it their own. He congratulated all of the officers for their hard work, particularly under the leadership of Steven Reid.

He went on to encourage members to wear the ‘team colours’, meaning the festival ties in both blue and red. David stressed the need to get out into the community and encourage people to join our order by openly discussing our charity work and the messages we promote by our ceremonies. He concluded by informing the members of Brian Buckle’s life in Freemasonry and his work in education, having been headmaster of at least three schools in an eminent career.

Proposing the toast to the new master, Julian Hales began by paraphrasing Oscar Wilde: “To be master of Semper Fidelis once might be regarded as misfortune. To be master twice looks like carelessness.” He qualified this tongue in cheek quotation by saying what a pleasure it had been to have Brian as master during the previous 12 months. Julian described Brian as having a resolute approach, dedication and generosity that will be remembered for many years to come and how everyone was looking forward to the next year under his leadership. 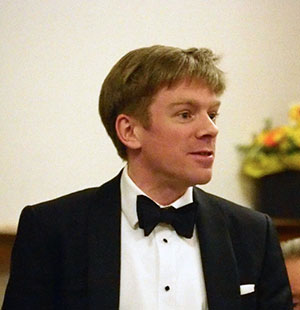 Julian Hales proposing the toast to the new master.

After an amusing introduction, the song to the master was sung with his usual rumbustious style by Godfrey Hirst. He led the brethren to sing along with him in the last verse with some very amusing results. In his concluding remarks Godfrey wished Brian every blessing for the year to come.

In responding to the toast to his health Brian explained the circumstances leading to his second term and assured the members that he was more than happy to do so. He thanked Brian Baxendale for his decision to carry on to the senior warden’s chair, thus giving time for the younger members to properly prepare for their future roles. He went on to explain the preparation for what had been a unique ceremony. The credit for the variations to declaring Brian as the master for the ensuing year and the ceremony for doing so, go to Steven Reid, who is the lodge mentor.

Brian went on to say that it had been an unusual ceremony but from his point of view a wonderful one. He thanked all who had taken part in the ceremony, particularly the brethren from the sister lodges for being the installing officers. He also thanked Godfrey Hirst, Keith Jackson and all present for the manner in which they had delivered the master’s song and concluded by thanking David Winder for the way in which he involves himself in proceedings and engages with the brethren. Finally, Brian thanked Bob Chesters for all the work he had done for the lodge over the years and for taking the trouble to travel from his new home abroad to be present. Before sitting down, Brian presented David Winder with flowers for his wife Sue.

After the toast to Masonic charities by Tony Hale a collection was taken and this was immediately followed by the tyler’s toast.