An impressive 78 brethren and their guests accompanied Deputy Provincial Grand Master Philip Gunning when he attended as the principal guest at Cleveleys Masonic Hall to witness Steve Willingham being installed into the chair of West Lancashire Century Lodge No 2349. 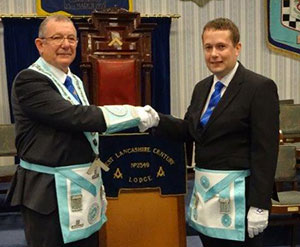 Outgoing WM Roy Morden started off the proceedings and dispatched the early part of the meeting in a faultless manner, ably assisted by the hard-working director of ceremonies Shaun Haynes. The members of the lodge demonstrated the commitment and practice they had put in to preparing for the installation of Steve as the new master, in what could only be described as a tour de force.

On opening the lodge in the second degree, Roy called upon the services of Roger Lees to act as installing senior warden, Dex Wilde to act as installing junior warden and as is customary in the lodge, Alan Howie of their daughter Peace and Unity Lodge No 3966, to act as installing inner guard. After Roy moved the lodge flawlessly to the third degree the PrDGDC entered to announce that Philip was outside the door of the lodge. Roy welcomed Philip and offered him the gavel which he politely declined. 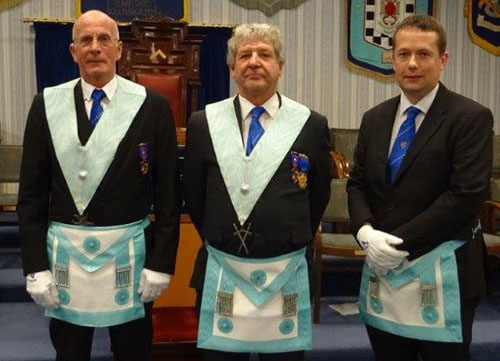 Pictured from left to right, are the ‘light blue’ brethren who presented the working tools: Richard Sheppard, Keith Carter and Peter Willingham.

Ray Bird then had the privilege of presenting Steve as master elect for the ensuing year. One of the undoubted highlights as the evening progressed was the impressive manner that the working tools were presented by three ‘light blues’. The third-degree tools were presented by Steve’s son Peter Willingham who is a member of Asshaw Lodge No 6849 based in Chorley who had come along especially to see his father installed into the chair of King Solomon. Keith Carter presented the second degree tools and Richard Sheppard presented those of the first degree.

Following the appointment and investiture of lodge officers for the ensuing year and the announcement that the ceremony was complete, Philip rose to communicate the greetings of the Provincial Grand Master Tony Harrison. Philip informed the brethren that he was sure Tony would want to congratulate all who had taken part in the ceremony; none more so than the immediate past master Roy Morden whose performance as installing master was of the highest quality.

Philip said he was extremely pleased with the generosity of the lodge as he received cheques for £600 to the MCF 2021 Festival, £255 to RNLI Fleetwood, £250 to Aspired Futures, £300 to the Stroke Association, £250 to Prostate Cancer and £250 to Blackpool Sea Cadets.

David Randerson congratulated the members of the lodge and the newly installed master on reaching Vice Patron status of the MCF 2021 Festival and said he was pleased to present the new WM and the lodge with its certificate. 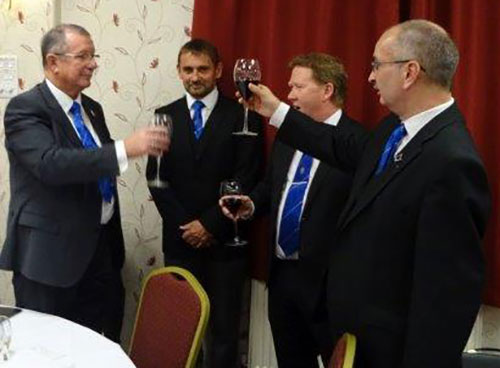 Pictured from left to right, are: Steve Willingham, David Thomas with Shaun Haynes and Roy Morden performing a duet for the master’s song.

At the festive board the brethren were treated to a veritable feast, good company and companionship. In responding to the toast to the health of the grand officers Philip again took the opportunity to offer resounding praise for what was a first-rate ceremony of installation. He continued by praising the light blues who presented the working tools, in particular noting how proud Steve must be to have his son Peter present the third degree tools to him.

Philip asked the brethren to continue to support the MCF 2021 Festival through the use of the white envelopes and wear their steward’s jewel with pride. Philip praised the work of the West Lancashire Freemasons’ Charity particularly in their provision of PSA tests at Provincial Grand Lodge and stressed how vital it was to have the test done if the opportunity arose. He spoke about how the WLFC has provided two blood bikes. Philip extolled the virtues of joining the Royal Arch and how it was a completion of a brother’s journey though Freemasonry; often called the completion of the third degree.

In what was to be the final surprise to the evening Steve and the assembled brethren were treated to not one, but two singers performing the master’s song. Shaun Haynes and Roy Morden’s rendition did not disappoint. The evening’s raffle raised an impressive £380 which will go to Masonic and non-Masonic charities