Over 50 brethren and guests attended the installation meeting of Hand and Heart Lodge No 4109 held at Urmston Masonic Hall. 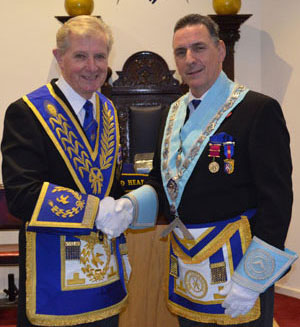 Installing WM, Ezra McGowan, opened the lodge and carried out the business before welcoming the principal guest Stuart and his grand officers to take their rightful place in the lodge.

Ezra then announced that the next item on the summons was the installation. The master elect Eddie Wilkinson was presented for the benefit of installation by JW Steve Masters and Eddie was installed in the chair of King Solomon for his third time by Ezra in a smooth and efficient ceremony assisted by his installing officers. 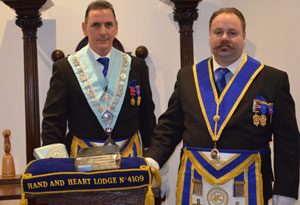 On completion of an excellent ceremony, Stuart rose to congratulate Eddie on reaching the chair of King Solomon for the third time and brought him the greetings of the Provincial Grand Master Tony Harrison and also congratulated Ezra and his installing officers on a wonderful ceremony paying complements to the brethren who presented the working tools.

The labours of the evening being ended the brethren retired to the dining room for the festive board where much banter and camaraderie was supplemented by a fine five course banquet.

Pictured left: Stuart responds to the toast to the grand officers. Pictured right: Eddie responding to his toast.

In his response to the toast to the grand officers, Stuart extended his personal greetings on behalf of himself and the grand officers present and said that he was very impressed with the standard of the work performed in the lodge. He said that Eddie is a fine example to the brethren and that his work in Freemasonry is exemplary. He said that he is confident that the lodge is in safe hands and that the ensuing year is going to be both busy and enjoyable.

He promoted the use of the Provincial website and that it contains all the news about what is going on both in Province as well as in the groups.

Stuart promoted the importance of continuing the Masonic journey to those brethren who are not in the Royal Arch to seriously consider joining. He mentioned the Masonic charities and the wonderful work that is carried out in raising vast amounts of money to distribute to charities particularly the Festival which is now over half way through its four year period. He encouraged those brethren who have not yet subscribed to the festival jewel, to do so and also brethren to consider subscribing to the white envelope scheme.

He thanked the grand officers and acting officer Darren Gregory for their support and also the secretary Ian Wood who ensured that his visit ran smoothly. He said that he had thoroughly enjoyed his visit to Urmston and would dearly like to visit again. 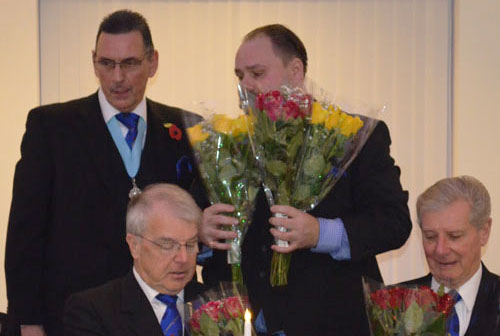 At this point, on behalf of the lodge, Ezra and Eddie presented Stuart and the grand officers with a bouquet and gifts, to which they were all very pleased to accept.

Immediate Past Master Mike Harris raised a toast to newly installed master Eddie and thanked him on behalf of the brethren for occupying the chair confirming that the lodge is in safe hands under the leadership of Eddie.

In response to his toast, Eddie expressed his thanks to Stuart and the grand officers for their attendance and also to everyone who had attended to make it a wonderful and enjoyable occasion. He particularly thanked Ezra for his hard work both in the lodge and the charitable work he carries out.

Eddie said that he was looking forward to the year ahead particularly working towards the lodge centenary next year and the installation of the longest serving brother Steve Masters. Eddie then presented Stuart with a cheque in the sum of £200 for the MCF.

The master’s song was sung with great gusto by the brethren whilst enjoying friendship and well wishes to the new master steady Eddie.

The evening ended with the tylers toast by Phil Rampling.

Article and pictures by Tom Fredrickson.