Chapter of Lebanon No 86

In 2001, the chapter celebrated its 150th anniversary, making it, like the Lodge of Loyalty No 86, (to which it is attached) the oldest chapter in the St Helens and Prescot Group and ranking ninth in the chronological list of chapters in West Lancashire.

However, it is suspected that the chapter dates from much earlier than that shown on the warrant. The evidence for these suspicions comes from three sources:

Secondly, the composite tracing board owned and used by Losge of Loyalty features a crowbar alongside all the more usual lodge symbols – a clear reference to Royal Arch and since this tracing board is thought to be at least 200 years old, is another indication of early Royal Arch activity.

Thirdly, a ‘plate jewel’ bearing the name James Hayes and the lodge number 111 Prescot, has an impressive ‘arch’ on the reverse face. Apparently, these plate jewels were very common amongst Freemasons and although the front was fairly well regulated in terms of content, the back was left to the individual. Interestingly, there is also an emblem from The Knights Templar.

Since Lodge of Loyalty carried the number 111 between 1781 and 1792, this too would indicate very early Royal Arch interest.

These indications prompted a request to the Museum and Library at Grand Lodge who confirmed that on 7 May 1807, a charter was issued to Chapter of Lebanon No 135 meeting in Prescot. Furthermore, minutes exist in the museum of meetings held as early as 1803 which continued until 1844 but at some stage after this date, the chapter ceased to meet and effectively became defunct.

This ties in very closely with the battle for survival of Lodge of Loyaltywhich was in very serious difficulties during this period and it was only in 1851 when a number of brethren from Liverpool joined the lodge that the membership grew as a result.

It is no surprise that the petitioner for the chapter warrant in 1851 was a J Walmsley, one of the Liverpool Masons who rescued Lodge of Loyalty and an early first principal of the “new” Lebanon.

As a lunar chapter, meetings have always been held on the Wednesday following a full moon since in the early days when there was no street lighting or even proper roads, it was much safer to travel after dark if there was moonlight when there was good chance that approaching highwaymen could be seen and evasive action taken.

It is also somewhat unique in that although it is attached to Lodge of Loyalty No 86 and carries this lodge number, it has a different name since the requirement for chapters to carry the same name as their sponsoring lodge only commenced informally in about 1817 and a requirement in 1843.

Meeting four times a year in the months of October, December, February and April in their premises on High Street, Prescot, on the Wednesday after the full moon, the chapter, although small in number, has a thriving membership who take great pride in the quality of their ceremonies and whilst they have embraced some of the new ritual suggested by Supreme Grand Chapter, have managed to hold on to much of their original and rather quirky working thus preserving their identity as a very old member of this Masonic Order.

The chapter was consecrated at Prescot Masonic Hall on 10 April, 1969 by the Grand Superintendent, Sir Knowles Edge Bt.

The establishment of the chapter followed 11 meetings of the founders, commencing in December 1967. It was felt that the existence of a chapter attached to Liverpool Dramatic Lodge would encourage lodge members to become Royal Arch Masons.

The founders made approaches to Garston, Liverpool and Prescot Masonic Halls regarding accommodation and finally settled on Prescot as the most satisfactory venue. The chapter was made most welcome and the companions of Antient Manor Chapter No 4511 kindly made their regalia and furnishings available to the chapter until they could obtain their own.

The chapter has continued to flourish and at present it has a membership of 31. Almost since its founding we have held a half night followed by a ‘Ladies to dine’ evening to which members wives and friends, Masonic and Non-Masonic are invited. Initially they were held in February but for many years now they have been held in December when members and guests enjoy festive fare and musical entertainment. As a result we have gained several new members who have enjoyed the proceedings and the company. 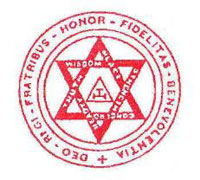 The consecration of Antient Manor Chapter No 4511 took place on Tuesday 22 May 1928 at 3:45 pm in the Oddfellows Hall, High Street Prescot, marking the progress of Freemasonry in Prescot.

At this time Prescot was a thriving industrial town having built up its prosperity on coal mining, pottery making, farming, watch making and latterly cable making. From the middle of the 19th century watch making began to decline and with the demise of the watch trade Prescot was fortunate in being able to fall back on the newly established cable making industry. The Prescot Wire Company having been established in 1891.

The consecration ceremony of the Antient Manor Chapter followed the usual form of prayers, readings from the scripture, hymns and some anthems rendered by a visiting choir. Following the consecration ceremony and meeting the chapter was closed in accordance with antient custom. The companions adjourned to the Deanes House Hotel where an excellent banquet was provided.

A number of founders of the chapter were founder members of the Antient Manor Lodge No 4511 having itself been consecrated some five years previously on 9 April 1923. Members of the lodge became chapter members in the earlier years. Meetings were held regularly on the last Monday in the months of November, January, March and the first Monday in May. At a meeting on 5 May 1930 these arrangements changed on the proposition of J Gornall to alter the by-laws for meetings to be held on the last Monday of September, November, January and March.

The chapter did not meet in the September of 1939. It can only be assumed that this was a result of a communication of 4 September 1939 from Supreme Grand Chapter of England “Having regard to the Emergency Orders of H M Government that until further notice all Masonic meetings are to be suspended.”

However, the chapter did continue to meet at the Oddfellows Hall until April 1940, when as a result of the military commandeering the use of the hall, they were obliged to move to the Deanes House hotel from the November, returning to the Oddfellows Hall for the first meeting after the war on Tuesday 27 March 1945.

The minute books reveal that members have come from a variety of professions, salesmen, engineers, stores manager, foundry foreman, master joiner and undertaker, postmaster, a serving companion in March 1942, butcher, baker, the police force, the teaching profession and a dairy farmer.

In 2003 the chapter celebrated 75 years and continues to meet in the hall purchased from the Oddfellows Society in 1948. Although industry around Prescot has declined over the years the energy and enthusiasm of Antient Manor Chapter continues.