The chapter companions were pleased to welcome Assistant to the Grand Principals Tony Hall as the principal guest for the evening, accompanied by Vice Chairman of the Liverpool Group David Kemp and Provincial Grand Sojourner Barry Fletcher. Interestingly, another Assistant to the Grand Principals Colin Rowling was also present and everybody was pleased to see Past Deputy Grand Superintendent Brian Jackson giving his support to the Hamer Chapter as a guest of fellow grand officer Syd Ford.

The installation ceremony commenced under the watchful eye of director of ceremonies Arran Banks and with Ray Stones requesting Malcolm Warren to act as Nehemiah for the ceremony. Malcolm was himself recently installed as first principal in Provincial Grand Stewards’ Chapter of West Lancashire No 8516.

All three principals elect being presented at the appropriate moments by Arran, the readings were shared by Malcolm and Dave Lovell. This year Mike Southern was installed as the first principal of Hamer, a position he was taking for the first time, with Doug Fletcher moving up to second principal and Ray Stones as third principal, and with a ceremony so slick and smooth one would be forgiven in thinking the participants must have all been coated with Castrol.

The red robe address to the newly installed first principal was given by Charlie Lucas, the purple robe address by Gordon Heron, with the blue robe address by Doug Fletcher. On completion of the ceremony, Tony Hall conveyed the congratulations of the Grand Superintendent Tony Harrison. Mike Southern next had the pleasant duty of presenting a cheque to Tony on behalf of the companions for £150 in favour of the West Lancashire Freemasons’ Charity. Tony thanked the companions of the chapter for their generosity. 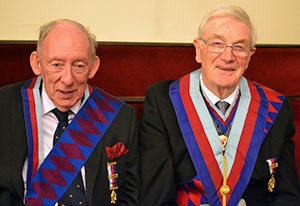 Following the completion of the ceremonial part of the proceedings the companions and their guests enjoyed a superb installation banquet in the adjoining dining room. In responding to the toast to the health of the grand officers, Tony paid tribute to those who had obviously worked hard to make the day such a success. He stressed the importance of encouraging their Craft Masons to complete the journey by joining the Royal Arch.

In making his point, Tony made reference to the historical links between the Craft and the Royal Arch and suggested that discussing that connection would perhaps be a good way of opening discussions with any potential candidate. It certainly gave the listeners plenty of food for thought.

During the evening Roy Stone gave thanks to all present for their tremendous support; it was much appreciated. Special mention was made with regard to the Royal Arch Masons of his own Craft lodge, Dominion Lodge No 4289, many who are members of Hamer Chapter. This year, all three principals installed are yet again also members of Dominion Lodge. 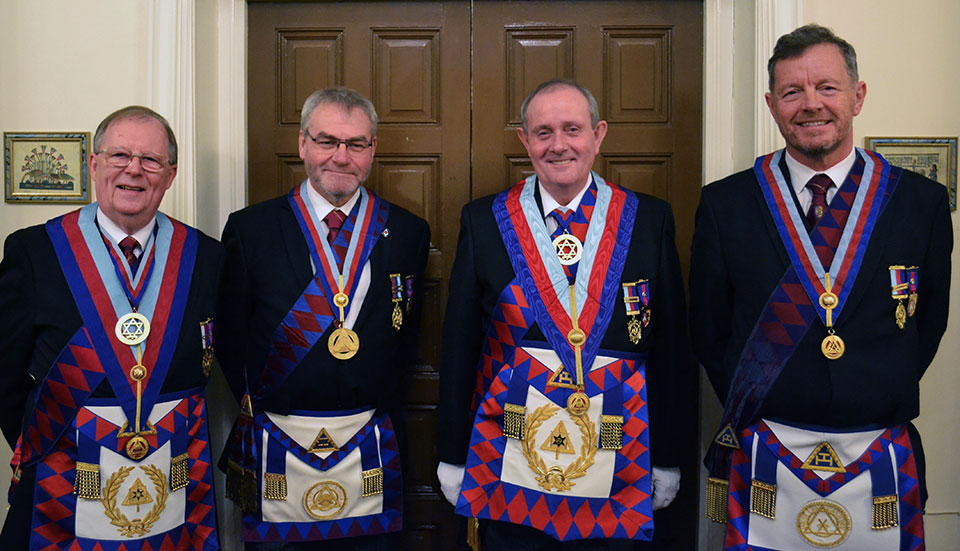 Waiting for the grand entrance, pictured from left to right, are: Colin Rowling, Barry Fletcher, Tony Hall and Dave Kemp.