Back in 2011, a certain Roger O’Loughlin became the WM of Brotherhood Lodge No 3967 and this year Roger took command of the lodge again in its 99th year. As an ex-military man, he is accustomed to taking command and this was evident in the masterful way he took over the lodge from the outgoing master, Clive Tandy.

Clive conducted the early part of the meeting with the style and panache with which he has become famous for within the group. At the correct time the director of ceremonies Mark Smith, retired to escort the visiting dignitaries into the lodge. The brethren were delighted to receive Assistant Provincial Grand Master David Grainger who was accompanied by fellow grand officers Harry Cox, group chairman John Turpin and Geoffrey Moore who were supported by acting Provincial grand officers Jim Finnegan, Reginald Wilkinson, John Burgess, Graham Dowling and Graham Kenyon.

Roger was presented as master elect by Bill Parsons before Clive installed his successor in a dignified manner befitting the occasion. All of this was watched over by more than 50 brethren who had come to see Roger installed into the chair of King Solomon for a second time. The working tools in the three degrees were delivered by Gareth Edwards, Mark Smith and Dan Jackson. After delivering the second degree tools, the extended version, Mark then went on to give the address to the master, an astounding feat of memory and dedication. The address to the wardens by Steve Edwards and the address to the brethren of the lodge by David Grainger were both given with the usual decorum and respect. 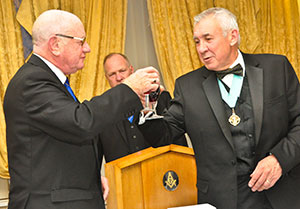 Following the installation of the officers for the ensuing year, David Grainger rose to bring the greetings of the Provincial Grand Master Tony Harrison to Roger and the brethren of the lodge. He said that Tony would have been delighted with the occasion and would have wished to congratulate the immediate past master and installing master Clive and the rest of the brethren who took part, in particular the junior brethren Gareth and Dan for their exception delivery of the working tools. David thanked the brethren for their generosity when Roger presented a cheque for £1,500 to go towards the Masonic Charitable Foundation 2021 Festival.

Upon completion of the lodge meeting, the brethren retired to the bar for welcome refreshments before gathering in the dining room for the festive board. The festive board went with a swing and when the time came for the toasts and speeches, Clive gave the toast to the new master Roger with his usual flair and this was followed by a superb rendition of the master’s song by Mark Rae accompanied by Jim Coupe on the organ.

Roger gave an impassioned response to Clive’s toast thanking him for his few kind words and thanking the junior brethren for their work that evening in lodge room. The night drew to a convivial ending and everyone was in no doubt that for the second time in Roger’s Masonic journey Brotherhood Lodge would be passed on to his successor pure and unsullied for the ensuing centenary celebrations.