Temperance Chapter No 2714, which was founded in 1908, completed another successful year and proclaimed the men carrying the honour of leading it for another year. In an absolutely delightful ceremony, first principal of the chapter James (Jim) Molloy opened the proceedings in due form, ably assisted by his fellow principals Ian Hayhurst and Jeff Whitehead. The occasion was enriched by the presence of John Roberts as the guest of honour and representative of the Grand Superintendent Tony Harrison. Supporting John was Liverpool Group Vice Chairman David Kemp. 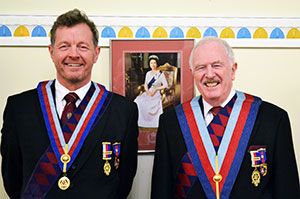 As soon as the normal business was concluded, John Roberts and his companions made their entrance into the chapter and Jim Molloy greeted John warmly, commenting that he was happy to receive him and hoped he would have a happy and enjoyable sojourn amongst the companions of Temperance Chapter.

The installation ceremony commenced with John Jackson proclaiming all three principals as remaining in office. Although a shortened ceremony, the robe address to each principal was still completed, with Karl Brennan giving that of the red robe, Jim Molloy that of the purple, concluding with Ian Hayhurst giving that of the blue. Jim Molloy proceeded to invest the officers, the main change being that Jeff Hodge took the role of director of ceremonies and Karl Brennan as his assistant.

John Roberts, at the completion of the appointments was delighted to communicate the best wishes and congratulations of the Grand Superintendent Tony Harrison to all who had taken office, together with a sincere wish to all the companions that they enjoy their Royal Arch Masonry. John then moved to congratulate the acting director of ceremonies John Jackson for the way he had conducted the evening.

Jim Molloy responded as first principal and thanked John most effusively for his attendance at Temperance Chapter and wished him to pass on the greetings of the chapter to Tony Harrison. Jim also took this opportunity to present to John two donations on behalf of the chapter, the first in favour of the Liverpool Masonic Hall Building Fund for £100 and the same to the West Lancashire Freemasons’ Charity. Following the first rising, the grand and acting Provincial grand officers retired in processional form. The remaining business of the day was duly completed before the chapter was closed and the members and guests adjourned to the banqueting suite to partake in an excellent festive board.

At the festive board, John Roberts, in his response to the toast to the grand officers, once more expressed his admiration for the ‘sincere manner’ in which the ceremony had been conducted. He said it had been a thoroughly enjoyable occasion and expanded upon the wish of Tony Harrison to ‘enjoy Freemasonry’ by musing upon how lucky we are in this country to be able to practice freely, whilst in other areas of the world Freemasons are severely restricted. He further commented on how wonderful the harmony was between the companions and how they all worked in support of each other.

After personally congratulating the three principals, John also extended his kind words to Bob Gibson for all the communications prior to his visit. On the theme of Royal Arch Masonry, he mentioned its importance as the completion of the Craft journey, and as such should be the priority before looking to go into any of the other Masonic Orders available.

Pictured from left to right, are: Ian Hayhurst, Jim Molloy and Jeff Whitehead.

Later, and in response to the toast to the visitors, George Christie, first principal of Chapter of Liverpool No 292 said how much he had enjoyed the events and, although a proclamation, it had taken nothing away from the ceremony and he had been impressed by how well the ceremony had been carried out overall, particularly the calibre of the robe addresses to each principal. The chapter closed in traditional style with the rendition of the janitor’s toast by John Jackson.