The companions and visitors of Fermor Hesketh Chapter No 1350 gathered at the Litherland Masonic Hall to witness Kenneth (Ken) Meath being proclaimed as first principle for a second year. The companions were pleased and honoured to have the presence of Anthony (Tony) Hall, Assistant to the Provincial Grand Principals as their principal guest for the meeting. 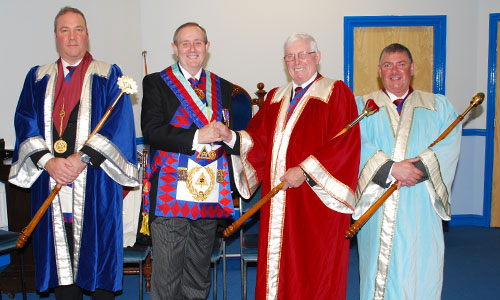 The meeting commenced with the three principals opening the chapter and once the initial business had been completed the chapters DC Brian Davies announced that Tony Hall was without and requested admission. Tony was then brought into the temple in a procession, accompanied by Graham Chambers, Malcolm Alexander and Michael Greenhalgh.

At the conclusion of the ceremony Tony brought greetings from the Grand Superintendent Tony Harrison, congratulating the three principals, saying: “I am delighted to be here this evening as representative of the Grand Superintendent, and he is aware taken you have taken on the roles on for another year, thus giving your service to the chapter. He hopes you have another good and enjoyable year in office.” Tony Hall then congratulated Brian Davies, Brian Cunliffe and all the companions involved for their excellent work and thanked the members of the chapter for the excellent and enjoyable ceremony.

Following the convocation the members and guests retired to enjoy the delights of the festive board.