When the members of the Peace Lodge No 2269 were made aware that a local Army Cadet Unit were in need of a new fridge freezer it was a call to arms. 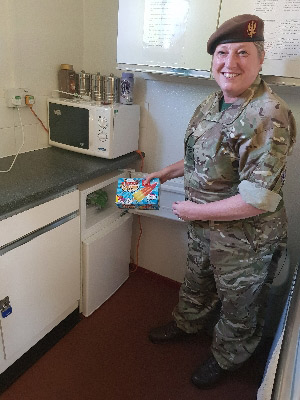 While out and about locally and engaging with the community, Gary Smith of Peace Lodge overheard a conversation that the local Army Cadet Unit had lost the use of its fridge freezer as it had given up the good fight.

Sgt Sue Sergison, the detachment commander, said that the fridge was needed to keep the cadets supplied with essential fresh items along with ice packs for the odd emergency that inevitably happens during their training.

Gary contacted the brethren of Peace Lodge and through a generous donation were immediately able to muster the necessary funds to assist, especially given that this year marks the 75th anniversary of the D Day landings. When the lodge WM Ian Moss and DC Gary Smith turned up to meet the recipients, it was in full use, the temperature had reached nearly 80 degrees and a welcome ice lolly was the order of the day.

Sgt Sergison was extremely happy that she was able to keep the young attendees on parade that evening, supplied with said lollies after a session of drill in preparation for the Armed Services parade the following Saturday.

It was interesting to note that on the wall of the drill hut were the values of the Cadets, including integrity, honesty, respect for the law, respect for others and discipline. Some if not all of these may sound familiar to all Masons.

Unfortunately, Gary Smith was not able to attend due to the fact it was his birthday that day, although he did send his best wishes to everyone concerned.