The installation meeting of Orrell Lodge No 8371, which meets at Pemberton Masonic Hall, was honoured by the presence of Phil Gunning, Deputy Provincial Grand Master. Phil was accompanied on this occasion by grand officers, led by Assistant Provincial Grand Master David Ogden, together with Geoffrey Porter (group chairman) and Graeme Hughes, supported by acting Provincial grand officers Barry Dickinson (PrJGW), Eric Bailey (PrSGD) and Barry Fitzgerald (PrDGDC), who was on duty in his official capacity directing proceedings.

Further support was added by group officers John Selley (vice chairman) and Chris Reeman (secretary). They were all treated to delightful ceremony as Jim Wheeldon installed his successor Derek Ishmael. Derek had been in the chair some 15 years ago in Up Holland Lodge No 7608 prior to its amalgamation.

Derek had started his journey again to the WM’s chair some years ago by taking on the role of tyler and then serving in each office before arriving again to his current position as a ruler in the Craft again. It was important to him to go all the way before taking the chair. Derek said that he had been nervous and apprehensive for several weeks before his special night, but if that was so, it certainly didn’t show. Derek played his part with dignity and apparent ease, whilst Jim did an absolutely splendid job in installing him.

Once comfortably in the chair, Derek appointed his officers. It is the tradition in this lodge that members give all the addresses, so John Grimshaw delivered the address to the brethren, giving Phil Gunning a well-deserved rest. Bill Sass gave the address to the new WM and Alan Green the address to the wardens. The highlight of the event was undoubtably the delivery of the working tools by junior brethren John Bibby, Marek Blaskievicz and recently initiated entered apprentice Jeff Derbyshire. DC Frank Highton and ADC Gordon Turner kept the proceedings flowing, and all in all it was a great team effort. 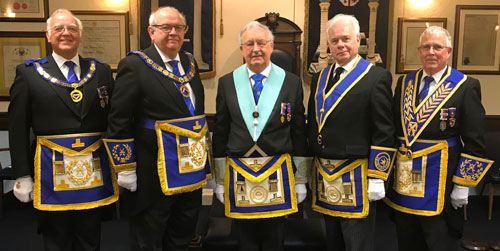 The ceremony complete, Phil was delighted to bring the congratulations of the Provincial Grand Master, who he said, would have been spellbound by such a wonderful ceremony of installation. He congratulated both Derek on achieving this great milestone in Masonry and Jim for the magnificent way he installed him. In addition, he commented on the work done by all the officers and brethren who had taken part, particularly the junior brethren who had delivered the working tools.

Phil was also pleased to receive cheques by way of charitable giving in favour of Pemberton Masonic Hall Development Fund, West Lancashire Freemasons’ Charity, Wigan and Leigh Hospice and the MCF 2021 Festival, which, together with money already donated, gave a magnificent total of over £3,400.

A fine festive board followed, with an unusual menu picked by the new WM, much to the delight of the principal guest. It consisted of pate, steak pie, chips and vegetables, rice pudding and cheese and biscuits. Peter Carletti sang the master’s song, with Gordon Turner attempting to master control of the pre-recorded music, but peter deciding he was better off without it.

It was a wonderful evening, well attended and much enjoyed. Derek has a busy year ahead, with the prospect of further initiations and double ceremonies to look forward to. Knowing that he has the support of a very experienced lodge, he relishes the challenge.