“A huge success that has more than met our expectations.” These were the words of Lynsey Lawson who is the team leader for family and bereavement support at the Furness based St Mary’s Hospice when she was asked for her views on the recently commenced ‘Make Do and Mend’ initiative based at the hospice’s retail premises in Duke Street, Barrow-in-Furness. 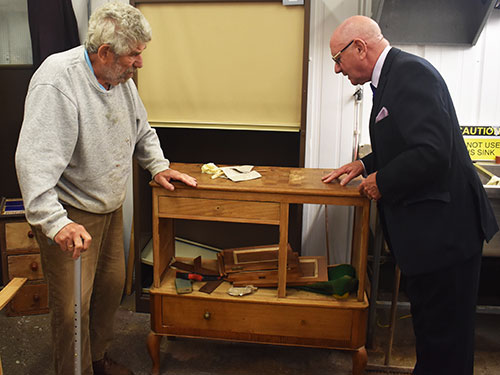 George Last (left) discusses the restoration work that he has carried out with David Grainger.

The scheme was able to be implemented due to a grant of £20,000 from the Masonic Charitable Foundation. The donation from the MCF enabled an unused corner of the premises to be developed into a suitable work space.

The aim of the scheme is to provide a chance for bereaved men and women to come together to share their experiences and, ultimately, to help each other through their loss. The initial idea for the scheme arose from discussions on how best to connect with those bereaved people who found it uncomfortable to access the already available support and counselling. Experience shows that this relates mainly, but not exclusively, to men.

Head of clinical services Jo Blake explained: “It was thought that providing an opportunity for them to get together with people in the same position and to work together in upcycling donated furniture may be a possible way forward. A blueprint for the program was drawn up and an application was submitted to the Masonic Charitable Foundation for the funds needed to get the scheme up and running. We are very grateful that our bid was successful.”

An invitation to visit the workshop and meet some of the users was readily accepted by West Lancashire Assistant Provincial Grand Master David Grainger along with Furness and South Lakeland Group Chairman Peter Schofield and local charity steward Richard Wilcock.

After speaking with members of the hospice team, as well as some of those benefitting from the scheme, David commented: “It is superb to see our charitable funds being put to such marvellous use. It is often said, when accepting donations from lodges for the MCF that we thank the lodge on behalf of the recipients who they will never know or see. To hear first-hand of the difference the scheme is already making to the lives of others in helping them through the grieving process is really quite touching. It brings home the true ethos of charitable giving which is at the heart of our wonderful fraternity.”

One of those who has engaged with the program is George Last whose wife Linda passed away at the hospice Christmas time 2017. George was happy to talk about the benefits of ‘Make Do and Mend.’ 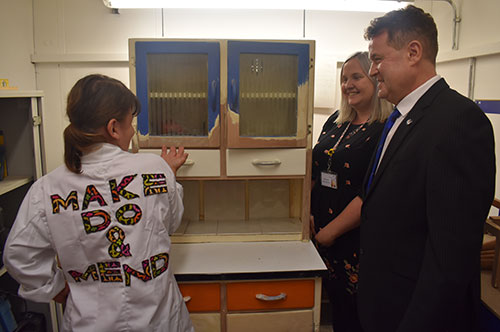 Olivia Armistead (left) describes to Lynsey Lawson and Peter Schofield how the scheme has helped her.

George observed: “I come down once a week and have found it really beneficial. The company and the overall community feel of the workshop have helped me to come out of myself. I look forward to getting out of the house to come along and work on the cabinet I am recycling. It is self-supporting as we are all in the same boat. One of the other users has become a firm friend and we go for a coffee and a chat together after each session. I now have the confidence to go along with my daughter to the coffee evening which the hospice host on a Thursday evening. It has made a real difference to my life.”

The workshops are run on informal lines with a bereavement counsellor always on hand, but not obtrusively so. Such is the demand that the present sessions and the next series of sessions are fully booked.

It is not only men who benefit. Olivia Armistead found it difficult to cope with the loss of all four of her grandparents in a short space of time. Olivia attends the workshop and took pride in showing Peter Schofield the kitchen cabinet she was working on as she told him how much the scheme had helped her.

Head of retail Caroline Welch remarked: “The hospice receives a lot of furniture which requires a touch of paint, a repair or upholstering. Those pieces which have been processed through the ‘Make Do and Mend’ scheme will now be labelled as such in the warehouse. I am proud that the retail branch of the hospice, which previously had been principally concerned with fund-raising, is now playing a part in delivering bereavement care.”

You never know but with various television programmes making ‘shabby chic’ furniture a fashionable addition to the modern home then the ‘Make Do and Mend’ label may be a collectable of the future.

Last word on the scheme rests with Lynsey who said: “Such has been the success of the program that it deserves to be copied by hospices far and wide. We thank the Masonic Charitable Foundation for their financial support in bringing the idea to fruition.” 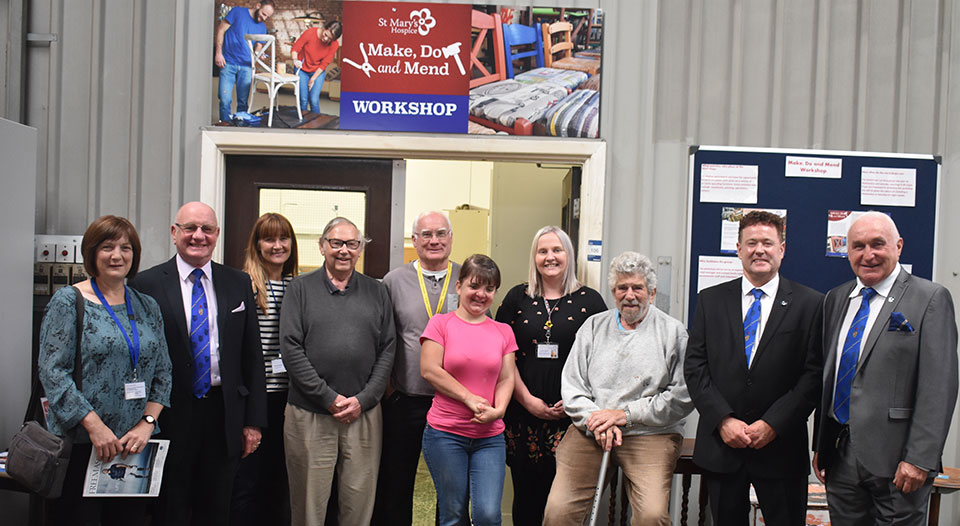