One of the key figures of the suffragette movement, Annie Besant, was not only a socialist, rights activist, author and orator but also one of the founders of the society of Co-Freemasonry which has evolved into the present day ‘Order of Women Freemasons’. 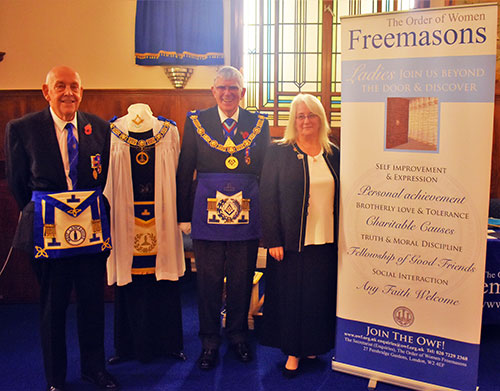 Pictured from left to right, with Geraldene’s regalia on display are; Bill Edmonds, Tony Harrison and Geraldene Greenhalgh.

This was one of the interesting facts revealed by Geraldene Greenhalgh in an absorbing talk she gave at Barrow-in-Furness Masonic Hall to a meeting of Lonsdale Lodge of Installed Masters No 9422. Geraldine is a Senior Grand Warden in the Order of Women Freemasons and holds responsibility for Lancashire.

She further explained how Annie had become head of the Order and had led a public march through the streets of London by her members, dressed in their regalia, during one of the important demonstrations in support of the campaign for universal suffrage.

Previously the lodge had been opened, the business conducted and duly closed before Geraldene was then welcomed into the lodge room to give her talk. She was not the only woman in attendance as the wives and partners of Lonsdale Lodge of Installed Masters members were also admitted to enjoy the oration. Amongst the attentive onlookers was Provincial Grand Master Tony Harrison who was accompanied by his wife Maureen.

Geraldene outlined how the Order was founded and its subsequent history. It shares many of the principals of Freemasonry and its ceremonies reflect those performed by their male counterparts. The first head of the order in 1908 had in fact been a man, the Rev Dr William Cobb. Since 1912 the Grand Masters have all been women and in 1920 it was decided to restrict admission exclusively to females which continues to this day. 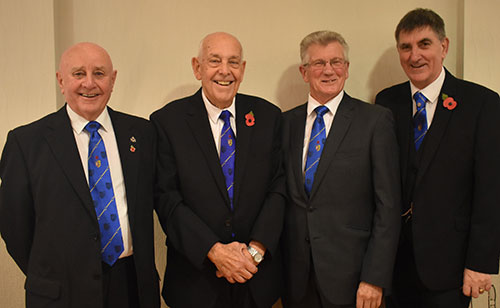 One of the principal objects of the Order of Women Freemasons, which is open to all faiths, is charity. It was revealed that the ‘Race for Life’ fundraiser in aid of Cancer UK in 2016 saw the Order raise £100,000 for the campaign. Recent years have also seen donations of £100,000 each to charities in aid of Alzheimer’s disease and breast cancer research. In its centenary year in 2008 donations of £250,000 had been made to Macmillan Cancer Support and Cancer Research UK.

Rather than a levy on the members, the Order relies on charitable funds being raised at social events. A Gentleman’s Festival replaces the Ladies Night held by Craft lodges.

The Order now boasts 6,000 members in this country and abroad in 350 lodges. The Order is administered from premises in Pembroke Gardens in Notting Hill which were left to them by a member. The Grand Lodge meetings held in Birmingham regularly attract over 1,000 members. In addition to the Craft the Order of Women Freemasons also has a degree equivalent to the Royal Arch Chapter as well as several other Orders.

Geraldine added that females who wished to enjoy Freemasonry could also join the Honourable Fraternity of Ancient Freemasons which also only admits women as members and is now on good terms with the Order of Women Freemasons although that has not always been the case.

WM Bill Edmonds thanked Geraldene for a talk which had proved both informative and interesting. The content and the excellent delivery meant that everyone, male and female, was kept enthralled throughout the lecture which was thoroughly enjoyed by all present.

Earlier secretary Terry Pearson had been kept busy as it was the business meeting, being the last lodge prior to the installation. Frank Pearson of Dalton-in-Furness Lodge No 6828 was elected as master for the ensuing year. Tony Nevinson was again elected to the position of treasurer.