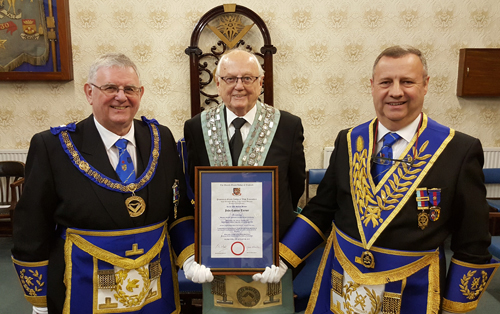 Pictured from left to right, are: Stewart Seddon, John Turner and Peter Lockett.

In opening the celebration Stewart said: “This evening we are summoned to a very special meeting to honour and pay tribute to one who has served the Craft, loyally and faithfully for 50 years and it is so nice to see so many brethren here this evening sharing in John’s special occasion, this is a wonderful milestone in his Masonic journey and he can now add ‘golden jubilee’ into his extensive portfolio.” At this juncture, John was placed in a prominent place in the lodge. Stewart continued: “Brethren, I’m going to take you back in time to the year 1940, a very important year in history for a number of reasons; King George V1 was on the throne, Neville Chamberlain was Prime Minister of a National Coalition Government, Britain was at war with Germany and on 1 January 2,000,000 19 to 27-year-old men were called up to serve their country.”

He continued to inform the gathering that food rationing was introduced and metal security threads were added to £1 notes to prevent forgery. On 10 May Chamberlain resigned as Prime Minister and Winston Churchill took over. The evacuation of Dunkirk began on 26 May and by the 4 June some 300,000 allied soldiers had been evacuated. The BBC Forces Programme began broadcasting ‘Music While You Work’ and on 9 July the Battle of Britain began. In September in France, despite the war raging about them, a group of young French men were out hiking and discovered the 17,000 year old cave paintings at Lascaux.

Stewart, in lighter mood stated: “Over the pond our yet to be allies were revelling in the debut of Tom and Jerry and Elmer Fudd and, in order to build their young men up ready for war, the first McDonalds restaurant was opened in San Bernadino, California. And, believe it or not brethren, the International Olympic Committee found time in May to formally cancel the summer Olympics. You couldn’t make it up, could you?”

Meanwhile, the breaking news at 69 Stump Lane, Chorley on 15 July was that Martha Turner (better known as Molly) was giving birth to a son – to be named John Casson. John’s contemporaries include politicians Frank Dobson and Jeffrey Archer; from the world of acting David Jason, Penelope Keith, John Hurt and Patrick Stewart; from entertainment Jimmy Tarbuck, Tom Jones, Cliff Richard, Ringo Starr and John Lennon, and from the world of sport Jimmy Greaves, Dennis Law and Mike Hailwood. On John’s actual birth date through history the 15 July shows that in 1099 the City of Jerusalem was captured and plundered by Christian forces during the first crusade. In 1381 John Ball, a leader of the peasants’ revolt was hanged, drawn and quartered in the presence of Richard II. In 1799 the Rosetta Stone was found in the Egyptian village of Rosetta by Captain Pierre Francois Bouchard during Napoleons’ Egyptian campaign.

John’s father George was a cotton spinner who later went on to be a clerk at the Royal Ordnance Factory. His mum was a medical visitor for an insurance company who also ended up as a clerical officer at the R O F. John is the youngest of three children. John’s sister Alice, who is six years older than him and his brother Alan four years John’s senior, were both born on St George’s Day. John however was born on St Swithin’s Day.

Things were soon to change though because John’s uncle Percy was bombed out from his house in Bolton and went to live with them. Six into three bedrooms wouldn’t work and uncle Percy was on the settee downstairs. So, it was moving time. A new house was bought, all worldly possessions packed, removal van loaded, all aboard and the driver releases the handbrake and just 50 yards down the road stops. Yes, they had reached their new home.

John attended Highfield County School from age five to 11 and then it was on to Chorley Grammar School to age 16. John passed seven O level exams and played cricket for the school. On leaving school and being obsessed with cars he got an apprenticeship at George Hunt’s Garage at the top of Harpers Lane where he became a motor mechanic. That business grew and eventually became solely involved in running tankers and cranes so John moved to Leyland Motors as a fitter. Whilst at Leyland Motors John, along with three others, were sent to Cuba as a service engineers. He was the only single man on the team and he found himself having to ‘fight off ‘ the Cuban ladies; not because he was a ‘chick magnet’ – people were desperate to get off the island. Stewart informed the audience that John didn’t fight them all off but he didn’t bring any home either.

Returning to the UK John became a sales representative and then he donned dark glasses and disguises to become Multiparts industrial spy. John set up accounts with other major manufacturers: Volvo, DAF, Scania etc., John bought parts, borrowed and copied microfilms thus enabling his company to keep abreast and ahead of competitors. John’s cover was eventually blown so he became shows and exhibitions manager, travelling the length and breadth of the country until in 1991 at the age of 51 when he took redundancy and got married – but not to a Cuban girl.

John first met Margaret Barton at Chorley Grammar School. Years later he was Youth Club Leader at St Peter’s Church where there was a small amateur dramatics group which he was very active in. It was suggested that he should go to St George’s where their group was larger and with better facilities. He did and was reconnected with Margaret who by then was married to Peter Foulds. John and Peter were to become best friends and Peter was instrumental in persuading John to rekindle his interest in cricket by dragging him to Whittle and Clayton-le-Woods Cricket Club who played in the Chorley and District League. According to John, he was a pretty decent left arm spinner but an awful batsman.

Sadly, Peter died at the very young age of 49. John and Margaret’s relationship grew ever closer and they were married on 5 May 1993 at St George’s Church, their honeymoon being at Koh Samui, Thailand. Margaret is a member of the Order of Women Freemasons. She has been in the chair of her Craft lodge five times and is a member of a number of other Orders including the Royal Arch. At this point in the proceedings, Stewart disclosed that he had been trying to convince John to join himself and that Margaret would no doubt help him with the ritual.

Visiting John’s Masonic history, Stewart asked the lodge secretary Eddie Webster to read from the minutes of the meeting at which John was initiated. John was proposed and seconded into Astley Lodge No 6234 by two of his uncles, Stan Blackledge and Dick Morris respectively and initiated on 13 May 1968. Having progressed through all the floor offices John was installed as master on 9 March 1981.

John joined Townley Parker Lodge on the 6 May 1999 and 18 months later on 2 November 2000, was appointed senior warden and installed as WM in 2001. John was master again in 2009 and is currently celebrating his hat trick of masterships in the lodge this year. In addition, John has served as senior warden on two further occasions; was charity steward for seven years from 2010 to 2017 and has been lodge mentor since 2015. John’s first Provincial Appointment came in 2009 when he was awarded the rank of Past Provincial Assistant Grand Sword Bearer. Promotion to Past Provincial Senior Grand Deacon came in 2014.

There is no doubt at all that John’s entire life has also been an example of what makes a good Freemason, as well as a good citizen, a good husband and in every way, a contributor to society as a whole. And there is also no doubt, that during the last 50 years, anyone who happened to learn that he is a Freemason, could not fail to see him as anything other than a good ambassador for our Order. Chairman of Chorley and District Group Peter Lockett read the certificate, which is an acknowledgement of the Province of West Lancashire’s great appreciation of John’s half a century of membership of the craft.

The ceremony being over, the brethren retired to the festive board where much reminiscing took place over a fine dinner and a glass of wine.