Imagine the scene, you are sat at home watching the television and your wife says: “I think you should get out more and get to know your brother-in-law.” Well, what do you do when instructed to go out? You simply do as you’re told to do, and you ring your brother-in-law and tell him what has happened and then ask him for his advice. 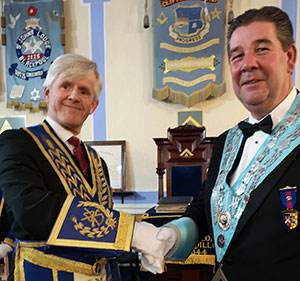 It turns out that your brother-in-law has a terrific idea about how to get to know each other more and asks: “Have you ever heard of Freemasonry?” As it happens, the brother-in-law in question is David Boswell, secretary of Blackpool Lodge of Tranquillity Lodge No 6544 and would you never have imagined a few years later you are going to be installed in the master’s chair of the lodge and all this based on a chance remark by your wife.

The lodge was opened in due form by the outgoing master Anthony Ellis and when the time was right John Tew, the director of ceremonies, stepped out of the lodge to escort the visiting dignitaries into the lodge. The brethren were delighted to receive Ian Ward South Fylde Group Chairman, who was representing the Provincial Grand Master tony Harrison, accompanied by fellow grand officers John Turpin Blackpool Group Chairman and Geoff Pritchard, together with acting Provincial Senior Grand Deacon Gordon Smith and Provincial Grand Stewards John Pitches and Ben Gory. 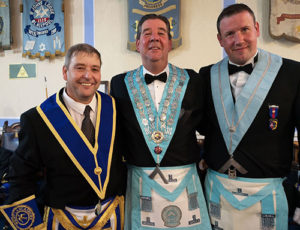 Pictured from left to right, are: David Boswell, Mark Hellis and Anthony Ellis.

Anthony then invited David Boswell to occupy the master’s chair so that he could install his brother-in-law, Mark Hellis into the chair of King Solomon, a rare privilege indeed. Mark was presented as master elect by Colin Wade to David, so that he might receive from his brother-in-law’s hands the ceremony of installation, which according to ancient tradition was carried out in a most heartfelt and sincere manner.

The whole ceremony was watched by over 60 brethren and friends of Mark and they were treated to a spectacular display of ritual. In particular, the presentation of the working tools by Alan Albiston, Gary Wainwright and Mark Ganley has to be singled out as one of the highlights of the evening. The address to the master was then delivered with gravitas by Mel Wainwright, the address to the wardens by Colin Wade and the address to the brethren of the lodge was delivered in his usual relaxed style by Ian Ward.

Once all the officers for the ensuing year and been appointed and invested, Ian Ward rose to bring the greetings of the Provincial Grand Master Tony Harrison to Mark and the brethren of the lodge. He said that the Provincial Grand Master would have been delighted with the occasion and would have wished to congratulate the immediate past master Anthony, and installing master David, and the rest of the brethren who took part, in particular the three brethren for the superb delivery of the working tools.

Ian Ward then thanked the brethren for their generosity when Anthony presented him with cheques for £800 to go towards the Masonic Charitable Foundation 2021 Festival, £500 for the Masonic Club, £600 for Staining School, £300 for the Magic Club, £200 for the SCBU at Victoria Hospital, £200 to go to Singing for the Brain, £100 for the NW Air Ambulance and £200 for Rosemere Cancer Trust, and along with other donations throughout the year, a grand total of £3,267.50 was raised. 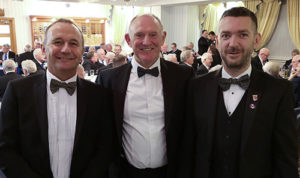 With the lodge business completed and after a short period of relaxation in the pleasant surroundings of the bar the brethren moved into the dining room for a marvellous dinner at the festive board. In response to the toast to the grand officers, Ian poured praise on the lodge for the marvellous ceremony and in particular the renditions of the working tools by the junior brethren. He then presented the lodge with a certificate of Vice Patron of the Masonic Charitable Foundation 2021 Festival.

Anthony gave the toast to the new master with all the confidence that he gained throughout his year and this was followed by a superb rendition of the master’s song by John Durell accompanied by George ‘magic fingers’ Holden on the organ. In his response to the toast, Mark assured the gathered brethren that an exciting and busy year lay ahead for him as master in particular and for the lodge in general, and that enjoyment and fun in everything they do would be there for all to see.