Hand and Heart Lodge No 4109 was originally consecrated on 22 October 1920 and was due to hold a unique, special meeting on 22 October 2020. Unfortunately, the normally serene flow of Freemasonry was interrupted by the infamous COVID-19 virus with the Hand and Heart centenary being no exception. Thus, by dispensation, this special occasion was held exactly one year later and despite actually being the 101st anniversary, as centenary meetings go, was considered to be a huge success!

The centenary meeting was held in the magnificent surroundings of Swinton Masonic Hall and despite the recent epidemic, was attended by a very large number of lodge members, grand and Provincial grand officers and honoured guests including relatives of Stanley Whitfield, one of the founders of the lodge, who made the trip all the way from Guernsey in the Channel Islands.

After the opening the lodge by WM Steve Masters, the normal business of the lodge quickly dispensed with and the lodge made ready to welcome the Provincial party.

Lodge members and visitors alike were clearly delighted to receive an expected knock on the door from the Provincial Director of Ceremonies, Malcolm Bell, who announced that the Provincial Grand Master, Tony Harrison was without and demanded admission.

Brethren in the room rose to greet the ProvGM, admirably supported by his Provincial team, who processed into the lodge room in massed colourful ranks. Having been introduced to the WM who promptly offered him the lodge gavel, Tony, on this occasion accepted Steve’s offer, duly taking the proffered gavel and taking his place in the chair of King Solomon.

Tony commenced his introduction by remarking upon certain centennial dates which coincided with the consecration of the lodge, drawing comparisons between the Spanish Flu pandemic of 1919 and the COVID-19 pandemic and went on to mention the Hall Stone Jewel and its subsequent presentation to the lodge.

Tony then opened Provincial Grand Lodge and called upon the Provincial Grand Chaplain, John Hall to give an oration to the lodge, John started his oration with the founding of the Hand and Heart Lodge in which it was said that the lodge owed its name to a friend of the first WM, Herbert Harrison, the late Thomas Hand PProv Grand Treasurer, 2nd Preceptor of the Letchworth Lodge of Instruction. It was arranged that the Emulation Ritual would be used in his memory with the name intended to be ‘Hand and Harrison Lodge’.

However, the powers that be would not permit this name and ‘Hand and Heart Lodge’ was agreed to be used instead. The consecration meeting was held at Stretford Conservative Club, Stretford, on 22 October 1920 and later in April 1923, the WM Richard Jarvis informed the brethren that he had attended United Grand Lodge and received at the hand of the Pro Grand Master – (by virtue of the Hand and Heart Lodge 4109 qualifying as a Hall Stone Lodge) the Million Memorial Jewel to be worn by all succeeding masters of the lodge.

Eventually the hall in Stretford was declared quite unsuitable, it was cold with no central heating and the only heating came from a large open fire in the anti-room, therefore the only members who remained warm were the tyler and any candidates awaiting initiation etc. The final meeting at the hall in Stretford was held in May 1931 and on that evening, the WM gave notice of a motion: “That the Hand and Heart Lodge remove from its present headquarters, the Church Hall, Stretford to henceforth meet at the South Manchester Freemasons Hall, Edge Lane, Chorlton for the next lodge meeting in September and that Bye-Law No 1 be altered accordingly.”

Throughout the war years the lodge was well attended which is remarkable when considering blackouts, the risk of being caught in an air raid and fuel rationing. In 1940 it was decided that the lodger should ‘call off’ for meals to enable waitresses to get home in the blackouts and it was deemed permissible that members could wear their uniforms or morning dress. In September 1940, members were asked to donate their Jewels to the War Effort and that meals should be of a simple nature. In October of that year Provincial Grand Lodge instructed that: “Meetings should be held in accordance with the By-Laws regardless of the present war conditions unless some emergency rendered meetings impossible”.

During the early post war years, the lodge continued to grow in numbers and lodge meetings were well attended. In December 1948 it had 82 members, not only local but also hailing from Blackpool, North Wales, Birkenhead, Liverpool, Southport and even London. The lodge continued to enjoy regular candidates and remaining well attended and in 1955, the membership still stood at 82 with a further three candidates proposed and initiated in December of that year. 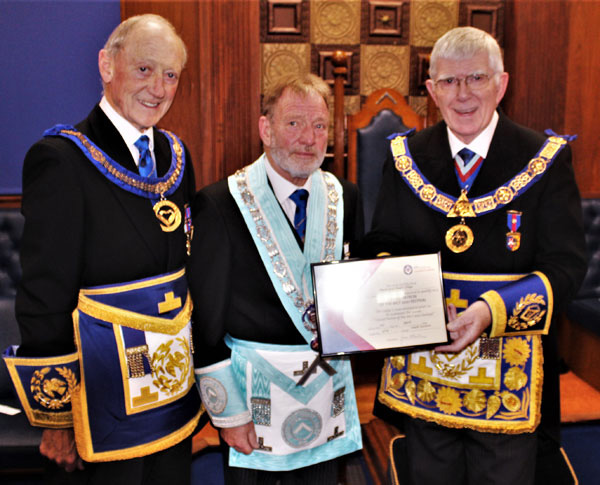 April 2005 marked the last meeting Hand and Heart held at Chorlton Masonic Hall, its home of 74 years but the hall was deemed uneconomical and subsequently closed and sold. The lodge then moved to Urmston Masonic Hall where it still remains.

Lodge membership in 2008 stood at 16, but that marked a low point and membership has steadily increased bucking the national trend of Masonry in general in which membership is steadily declining. The lodge membership is now rising currently standing at 25 including country and honorary members and although the subscriptions now stand at £340.00, a considerable increase over the earlier £238.00, there are more to come.

As a strange quirk, just after the Ladies Evening in 2020 the world was turned upside down with the advent of a particularly nasty strain of Coronavirus named COVID-19. This disease literally swept the planet causing illness and death wherever it passed. The country was placed in ‘lockdown’ with the government forced to declare that everyone should stay at home only venturing out for vital supplies and working from home where possible.

In the end COVID-19 managed what Hitler could not, prompting the Grand Master to declare all meetings from April 2020 to be cancelled for the foreseeable future and has even forced to reschedule the date of the centenary meeting, now to be held on 22 October 2021! However, the lodge is growing in strength and unity of purpose once more and anticipating the next one hundred years.

On completion of John’s presentation, Tony thanked him for a very interesting and thought-provoking oration, and then called the brethren to the attention of John for a prayer of re-dedication where after; Tony closed Provincial Grand Lodge and handed the gavel back over to WM Steve Masters.

When the ceremony was completed, Steve rose to the thank Tony along with the Provincial team for making the evening such a special occasion whereupon Tony presented Steve, on behalf of the lodge, with a Grand Patron Certificate for the 2021 Festival thanking the lodge for all its charitable donations during the last four years.

The Provincial Grand Director of Ceremonies then commandeered the proceedings with excellent precision and the Provincial team exited in the same magnificently colourful procession to which they had entered.

In readiness for the meeting, the lodge produced a Centenary booklet containing lodge information and historical notes; the booklet written and assembled by Derek Knowles with the assistance of Ian Wood charts the story of the lodge’s existence and is now available to view on the South Eastern Group Website, or by

The lodge having closed, the celebrations were continued at a magnificent and cheerful festive board with excellent food and wine in plentiful supply. Tony, in response to his toast, congratulated the lodge founders for their foresight in opening the lodge and to the current and future members for its continued existence and promising future.

The memorable occasion thus ended, but the history of the lodge and its current strength indicate that there will be many similar occasions ahead for Hand and Heart Lodge.