Ulverston Masonic Hall was the setting for the installation meeting of Furness Chapter No 995. Traditionally the members of the chapter are drawn mainly, but not exclusively, from Lodge of Furness No 995 and Ulverston Lodge No 7872.

The pre-eminent guest on the evening was Assistant to the Provincial Grand Principals Duncan Smith who had made his way to the top of the Province from the Fylde area. 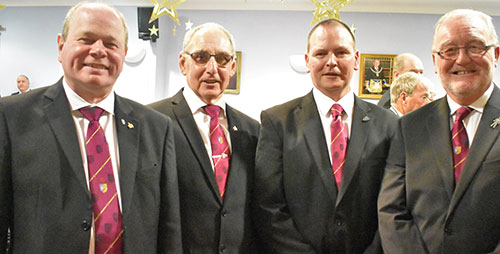 He was accompanied by other grand officers in the persons of Chris Band, David Grainger, Rowly Saunders and Alan Jones to witness another of their number, Barrie Crossley, ascend to the foremost chair of the chapter.

Outgoing first principal Jim Scott undertook the task of installing Barrie with good style in his own quiet and unassuming manner. Jim was later praised, not only for his work on the evening, but also the way in which he had applied himself to his duties particularly as an ambassador for the chapter during his many visits to other chapters.

It is perhaps a reflection of Jim’s attention to duty that there were seven visiting first principals in attendance for the ceremony. They were David Dryden of Barrow Chapter No 3928, David Ozanne of Grange Chapter No 1715, Owen Osmotherley of Dalton in Furness Chapter No 6828, Stuart Dickinson of Henry Cook Chapter No 1021, Alan Hilton of Semper Sursum Chapter No 5622, Alan Jones of Thurston Chapter No 2525 and John Stanley of Vale Chapter of Installed Principals No 5256. In addition, Derek Forrest, the first principal of Abbey Chapter No 1225, attended the installation banquet having been delayed by work commitments.

Although group chairman Peter Schofield was present his deputy Gary Rogerson was the designated group representative on the day.

Furness and South Lakeland acting Provincial officers Tony Cassells and John Browne were joined by their compatriots from the Lancaster Group Andrew Bartlett and Peter Pemberton. 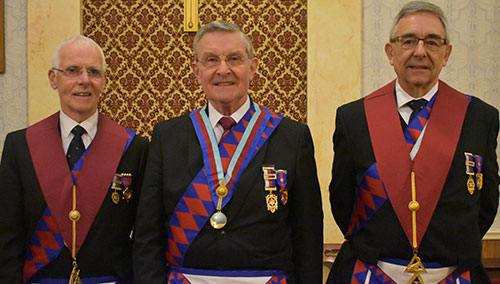 Pictured from left to right, are; Allan Mills, Jim Richards and John Torrance.

Barrie is a past first principal having attained that office in Grange Chapter No 1715 but he was obviously delighted to ascend to that role in what is his mother chapter. He went about installing Les Preston as his successor with all the clarity and accuracy you would expect from someone with his antecedents being a Past Provincial Deputy Grand Director of Ceremonies.

Les is re-visiting the chairs of the chapter having been first principal eight years in 2010.

Steve Ellershaw made the step from the post of principal sojourner to that of third principal. The manner in which he recited his obligation bodes well for the future as it was orated with confidence, precision and could be clearly heard by all present. As Steve was the only principal not of the “re-cycled” variety it fell to Les to handle most of the work of the evening. He did so with all the polish expected from such an acknowledged ritualist.

With Barrie, Les and Steve in position the ritualistic aspect of the work in the chapter is in safe hands.

There are some up and coming ritualists as well with junior members Reg Wilkinson, Stuart Allison and Pat Moss showing their potential as they undertook the work of the robe and sceptre addresses and did so to a very high standard. In fact, Duncan later remarked, “What a wonderful job they did.” He also added that the excellent ceremony had been a superb team effort. 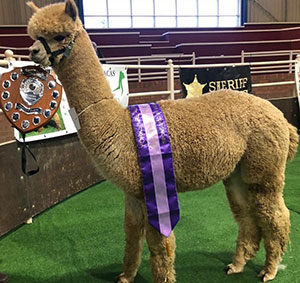 Steve has an interesting side-line as in addition to his position in local industry he is also the proprietor of ‘Lythe Brow Alpacas’. The alpaca is a South American camelid, which is similar to the llama, and produces much sought after wool. Steve has bred many prize-winning specimens of this engaging animal.

To mark the occasion Duncan was presented with a cheque for £500 in favour of the Masonic Charitable Foundation 2021 Festival. Group charity steward Richard Wilcock was on hand to point out that this made the chapter patrons of the festival and he presented Barrie with a certificate denoting this fact. He was also able to announce that as a result of the donation, under the local matched funding scheme, a further £250 from the group charity account would be credited to the festival in the name of Furness Chapter.

Following the formalities 78 members and their guests retired upstairs to the dining room where they enjoyed a very tasty three course meal. The ubiquitous spectre of a raffle made an appearance and raised the sum of £353 for the MCF 2021 Festival.

In responding to the toast to the health of the grand officers Duncan paid tribute to the efforts of the chapter director of ceremonies Allan Mills for ensuring that such a high standard of ceremony had been delivered. He also praised the efforts of Jim Richards who had retired from the post of scribe at the meeting with John Torrance taking his place.

The lively conversation and frequent laughter heard at the table paid testimony to what had been a very enjoyable evening of Masonic ritual and companionship.