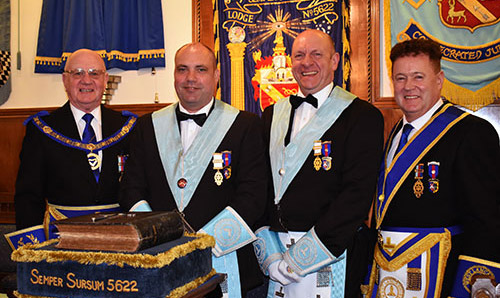 The work of Colin as he installed Geoff was first rate. As Colin had been Geoff’s proposer for initiation into the Craft there was obvious feeling and pride in the way he went about the task. He can reflect on a job well done.

It being one of the last opportunities for the acting Provincial grand officers to enjoy their rank, Keith Halligan stepped down from his role as director of ceremonies of the lodge and the responsibility for the smooth running of the ceremony fell to his deputy Dean Fawcett. Dean, who is a noted ritualist in his own right, can look back with great satisfaction on the manner in which he discharged his duties.

Bill Edmonds gave the address to the newly installed master in fine style. Furness and South Lakeland Group Chairman and lodge member Peter Schofield orated the address to new wardens Phil Renney and Kevin Rigg in a very accomplished manner, with David being made to sing for his supper and expound the address to the brethren of the lodge which he did to a similar high standard.

Junior brethren Stuart Braithwaite, Steve Harris and Dave Shaw were called upon to present and explain the working tools of the three degrees. Their accomplished work was enjoyed by all who witnessed it.

Group charity steward Richard Wilcock advised charity steward Alastair Davidson and festival representative Phil Renney as to their duties. Keith took to the floor to inform the stewards as to what was expected of them.

To mark the occasion, Geoff presented David with a donation of £500 for the Masonic Charitable Foundation 2021 Festival. Semper Sursum Lodge had previously made charitable donations of £250 each to the local Salvation Army and the newly opened dementia unit at Ostley House Home for the Blind. In addition, a further £1,295 had been contributed to the Barrow Masonic Hall Building Fund.

The lodge is in very good stead with most of the progressive offices being filled by junior members, the one exception being a joining member from another Province. In addition there is a very healthy look to the stewards’ bench. 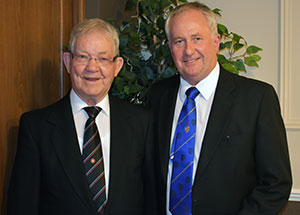 Geoff’s commitments as head of Hawkshead Lodge will only extend to the next meeting when he will install his successor. His workload will still be quite heavy however as Semper Sursum has a full programme of work planned for the ensuing year.

Following the formalities, 120 brethren enjoyed an excellent four course meal in the Fairfield Suite at the hall. During his response to the toast to the health of the grand officers, David paid tribute to the work of long standing lodge secretary Bob Durkin, as well as the efforts of Dean. The song to the newly installed master was delightfully sung by Jack Fawcett who was accompanied by son Dean on the keyboard. A raffle at the installation banquet raised a further £805 for the hall building fund. With a new floor being fitted in the dining room over the summer, the money will be put to good use.