Members and visitors of Heaton Moor Lodge No 4530 were honoured and delighted to welcome Gareth Royston Jones, South Eastern Group Vice Chairman, as the representative of the Provincial Grand Master Tony Harrison to their installation meeting to witness Michael Ku being installed as WM for the forthcoming year. 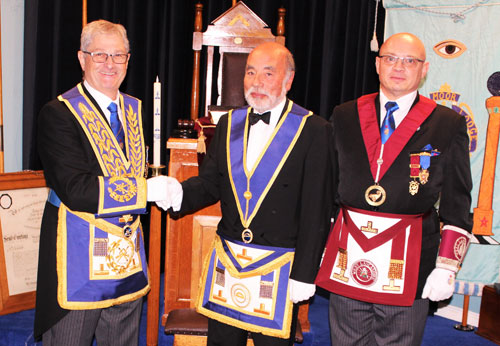 Pictured from left to right, are: Gareth Jones, Michael Ku and Darren Gregory

The lodge was opened in due form by WM Frank Simpson and the usual business of the lodge was dealt with quickly and efficiently and then Michael was obligated as master elect. Frank then opened the lodge in the third degree and then as a board of installed masters.

The installation was then carried out with Frank installing Michael into the chair in a most exemplary and sincere manner. Having been carefully placed in the master’s chair, Michael took stock for a few moments to soak up the atmosphere and come to terms with the fact that he was the WM once again.

The wardens received excellent addresses from Alan Kennedy followed by Gareth who congratulated Michael on being made WM and then presented a very warm and pleasant address to the brethren of the lodge.

On completion of the ceremony, Gareth rose and brought the congratulations and good wishes for a happy and healthy year from the Provincial Grand Master. Gareth said that had Tony been present, he would have witnessed a most excellent installation ceremony and similarly, on Tony’s behalf, congratulated the immediate past master and installing master Frank for his most excellent work and similarly congratulated the DC Steve Butrill for his work during the ceremony.

Michael rose to respond to Gareth where he thanked him for conveying those very kind wishes, he said he was most proud to be installed as WM and looked forward to his year ahead and possibly one more after that. Michael then presented Gareth with charitable donations by way of three cheques for £150 made out to the MCF, £50 for the Ticker Club which gives help to heart patients at Wythenshawe Hospital and last but not least £50 for The Silver Line, a charity helpline for older people.

On the first rising, Brian Hayes responded on behalf of the grand officers adding his congratulations and good wishes as he welcomed Michael as a ruler of the Craft in the South Eastern Group once again.

The meeting having ended, a very friendly and buoyant festive board ensued and Gareth, responding to his toast commented on the continued harmony of the lodge, now nearing its centenary year and its close ties with Composite Lodge No 5382.

Gareth reminded everyone about the group dinner and mentioned the importance of recruitment both to the Craft and to the Royal Arch and how we should all support our local Masonic halls or risk losing them for good!

A very good evening was rounded off with great good cheer.