The ‘house full’ signs were up at the Cumbria Grand Hotel, Grange-over-Sands for the annual Furness and South Lakeland Group Dinner with an evening of boxing.

In its 33rd year, this hugely popular event which is held under the auspices of Kendal Amateur Boxing Club, continues to go from strength to strength with the demand for tickets always exceeding availability. As is the norm nowadays there was a significant presence from the members of the neighbouring Lancaster Group who tend to show great support for all the ventures organised by their northern neighbours.

The hotel, which is taken over by patrons of the boxing, offers bed and breakfast accommodation at very favourable rates. Although the ticket for the event states 6:45 pm for 7:15 pm, many turn up in early afternoon to settle in and enjoy the views over Morecambe Bay. 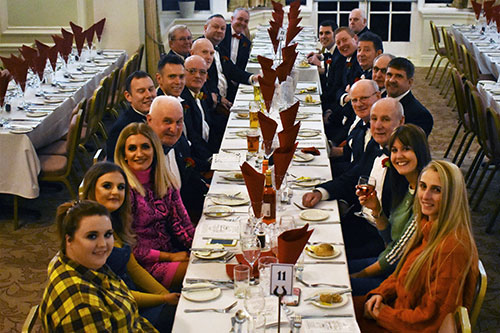 The stewards at dinner.

Many congregate in the lounge bar where, after meeting up with their friends, much discussion takes place about the principal questions of the day. Such weighty topics as; are we having a kitty, room or cash, do we need any white, should we have Merlot or Malbec and what time are we down for breakfast are all given an airing. Acquaintances renewed, it is time for a visit to the room to change into evening dress for the dinner and boxing.

The stewards however change early and along with the ladies who have volunteered to sell the raffle tickets enter the dining room a couple of hours before everyone else to share a meal before going about their duties.

The 200 spectators enjoyed a four-course meal, the menu being beef, prior to the commencement of the boxing. The service of the first course is the signal for the raffle ticket sellers to set about their work. The generous diners did not need too much persuasion to part with their cash and supported the raffle to such an extent that records were broken.

This year there were 14 bouts on the card. The familiar stentorian uttering of the words: “Gentlemen, gentlemen, gentlemen”, from the lips of Master of Ceremonies Ralph Spours, as he calls for order, are now part and parcel of the boxing experience. It is the 25th year that Newby Bridge Lodge No 4598 member Ralph has performed this role. This fact was highlighted by group chairman Peter Schofield in his welcoming comments and led to great applause in acknowledgement of Ralph’s wonderful service.

The first three contests were skills contests in which junior and inexperienced boxers demonstrate what they have learnt against a similar opponent in match-ups which are not scored. Even these proved eagerly fought and were very well received.

The match-maker had done his job well and the competitive 11 bouts proved to be exciting and close contests. All consisted of three rounds and a number appeared to be all action from first bell to last, with some seeming to leave even the on looking spectators exhausted.

Once again it was evident that the tougher and tighter the contest the higher regard the opponents had for each other at the final bell. There was great sportsmanship on display with mutual respect much to the fore as acknowledgement was made of the physical and mental trials they had endured in their quest for the verdict. There were no histrionics from boxers who did not get the decision but rather a recognition that they had been second best on that particular day. Some re-matches would be worth travelling a fair distance to observe. 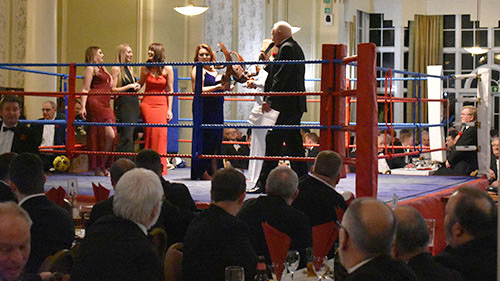 As well as the aforementioned raffle there was an auction and other fund-raising ventures designed to ensure that this opportunity to raise charitable funds was maximised.

Boxing chairman Barrie Bray commented: “It has been a really successful night. The treasurer has not completed the sums, but I am a confident that we will have raised at least £11,000 to be distributed to good causes. That is down to the marvellous generosity of our sponsors and those who have so readily put their hands in their pockets to buy raffle tickets and support the auction.”

As is a tradition of the boxing event, half of the monies raised will be directed to local good causes and the remainder donated to the Masonic Charitable Foundation. There will be a presentation at Barrow-in-Furness Masonic Hall later in the year when those funds will be distributed.

Group chairman Peter observed: “I am grateful to Barrie and all who assisted him for their efforts in producing such an excellent evening as well as those who have supported it. As always, my thanks go to Alan Willoughby the Chairman of Kendal A B C, without whose co-operation the event could not take place.” He added: “I am personally delighted that the money given locally goes to those smaller, often unheralded, good causes who add so much to our communities and to whom a donation of a few £100 makes a great difference. Some of the stories we hear at the presentation evening are quite moving and confirm that our efforts really are worthwhile.” Peter concluded: “Last year saw the boxing pass the £200,000 total as regards monies raised, we are now in a position to head for the £250,000 mark and that should be our focus over the next couple of years.” 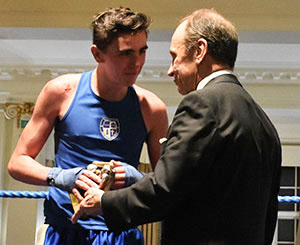 The following morning saw a leisurely breakfast enjoyed in the dining room which has a lovely vista over Morecambe Bay before adieu was bid to friends old and new.

The hotel has already been booked for 2020 whilst next up for the boxing committee is the task of making the arrangements for the presentation evening.

An additional benefit of this event is that it encourages some of the many non-Masons present to think about our wonderful organisation with the potential that some may wish to join us having enjoyed time in the company of members of the Craft. A preview of the boxing appeared in the local press and a follow up report of the evening’s proceedings will also feature, bringing our work to the notice of a wider audience.

The Cumbria Grand Hotel is also the venue for the group dinner dance being held on Saturday 9 November. With bed and breakfast accommodation, Prosecco and canapé reception, four course dinner, dancing to the excellent ‘Soul Survivors’, fireworks and supper tickets offer good value at £110 each. There is also the opportunity to stay over on the Friday and enjoy a buffet dinner with in house entertainment at a cost of £160 for both nights. All are welcome, full details will appear on the Furness and South Lakeland webpages soon.

Another group event is the concert at the Coronation Hall, Ulverston featuring 1960s recording stars ‘The Fortunes’ on Saturday 27 April details of which are also on the website.

Officers of the Furness and Lancaster Groups react to the publicity officer’s request for a night off next year!