Neil Pedder, Chairman of the Widnes Group and WM of Hale Lodge of Fellowship No 3799 capped off his very special year as master by installing his son Mark Pedder into the chair of King Solomon. Neil commented before the ceremony that he was delighted to have the privilege of installing his son Mark as WM of Hale Lodge of Fellowship. Neil added that it is an occasion neither of them would forget. 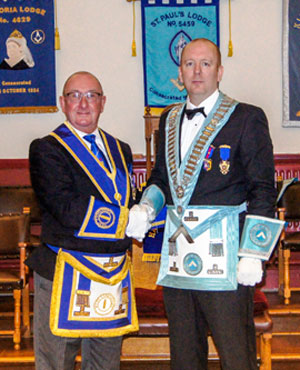 The lodge was opened in due form by Neil, ably assisted by his senior and junior wardens, his son Mark and Doug Fraser respectively.

The brethren then stood in respect to departed merit for 3 senior members who have passed to higher office since the lodge last met. Lodge director of ceremonies Steve Hindley, who sadly suffered a fatal heart attack in June (aged 65). Steve, who joined Freemasonry in 1985, was an active member of the lodge and other Masonic Orders within the Widnes Group and beyond, he will be deeply missed. The lodge’s most senior and experienced member, Alan Daniels, who passed away on 12 September (his 84th birthday). And one of the lodge’s honorary members, John Blackmore who passed away on 6 September (aged 89 years).

Once the opening business of the lodge was completed, Neil took the opportunity to welcome all the visitors, with particular mention of the masters in office for the current year, Ian Lynch of Lodge of Equity and Appleton No 1384, John Horn from Goodwill Lodge No 3896 and Les Williams of St Paul’s Lodge No 5459, all within the Widnes Group. Neil then thanked all those who had held office and supported him throughout his year as master.

The delegation was warmly received and welcomed by Neil, who then proffered the lodge gavel to Kevin. After momentarily accepting it, Kevin returned the gavel with a quiet smile. 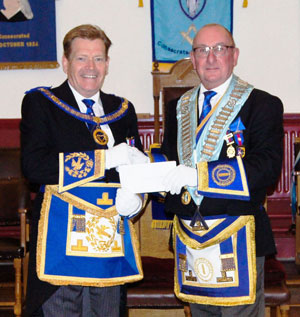 Before the installation got underway, Neil had a very pleasant task to undertake. He presented a cheque to Kevin Poynton for £300 which was made out to the West Lancashire 2021 Festival. Kevin thanked Neil for the cheque saying: “The thank you is really from those people who will benefit from such generous donations as this.”

Next, Neil presented a cheque for £100 to Alan Carter, Board Representative for the Widnes Group for the Widnes Masonic Hall Development Fund.  Finally, Neil announced that a cheque in the sum of £100 was to be sent to Diabetes UK in memory of Alan Daniels whose funeral had been held the day before this installation meeting.

The brethren of Hale Lodge of Fellowship pride themselves on ritual performed to a high standard. This year’s annual ceremony of installation was to be no exception.

When all was set, the master elect, Mark Pedder was presented by David Smith. Neil then proceeded to install his son Mark into the chair of King Solomon in a perfect ceremony and in a most dignified manner, after which Mark invested Neil with the collar and jewel of IPM.

The working tools of each degree were excellently presented to the new WM by Alan Carter (third degree), by Neil Pedder (second degree) and David Smith (first degree). After the presentation of the warrant, Mark proceeded with the installation of his officers for the coming year.

Once the officers were installed, Kevin brought the greetings and congratulations of the Provincial Grand Master Tony Harrison and congratulated Mark on taking the chair in such a fine ceremony. 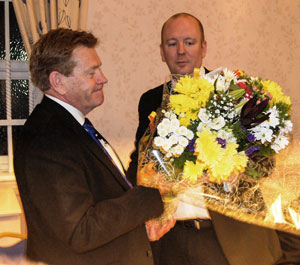 Mark Pedder (right) presents a bouquet to Kevin Poynton for his wife Susan.

The addresses were all given in exemplary fashion, with that to the WM by Barry Tomlinson, to the wardens by Brian Horabin and to the charity steward by Bob Williams. The final address was to the brethren of Hale Lodge of Fellowship, and was given by the principal guest Kevin Poynton.

On completion of the ceremony and as the brethren moved to the banqueting room, newly installed WM Mark commented: ”I am delighted to have been installed as WM of Hale Lodge of Fellowship. Being installed by my father made the experience even more memorable.”

Mark Pedder, cheerily in place in the chair, was clearly at ease with his high office from the moment he had taken up his position. He was confident and outgoing and continued in similar vein at the festive banquet that followed.

The ceremony of his installation had been a triumph and all were in high spirits as they tucked into a sumptuous celebratory meal. It went down as well as the ceremony had.

An air of congeniality prevailed. Cheery banter was in abundance and the speeches reflected the happy mood. The master’s song, rendered with gusto and showmanship by Peter Whalley, perfectly complemented the occasion and tyler Ian Black provided a perfect finale before the curtain descended on the proceedings.

Photographs and story by Jim Carmichael-Prince.