Everton Chapter No 823 has just celebrated 150 years of continued Royal Arch Masonry, a truly historic milestone. Not content with this though, on the same evening the chapter also celebrated 50 years in Royal Arch for Stan Sutch. This invitational meeting was opened in the east, as is the traditional manner, by the first principal Bernard Ashley, ably assisted by his two co-principals Tom McLaughlin and Jorge Perez. A warm welcome was extended to all the guests. Bernard, on behalf of the chapter, also congratulated David Brighouse, who had received a first appointment as Past Provincial Assistant Grand Scribe Ezra, at the Provincial Chapter meeting in Southport. 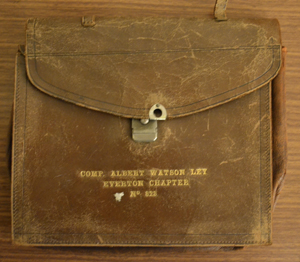 With the completion of the standard business, Bernard invited all to sit back, relax and enjoy their journey through 150 years of history, which was about to unfold before them. This started with Dave Jones reading the first minutes of the chapter, edited as follows; ‘The Supreme Grand Chapter having granted a warrant of consecration for Everton Chapter No 823, in connection with the Everton Lodge No 823, Tuesday 22nd December 1868 was appointed for its consecration. The principals designate were, George Turner as first principal, Thomas Ashmore second and John Goepel third. The beautiful ceremony of consecration and dedication was admirably performed by Andrew Cook Mott. After the installation of officers, it was proposed that companion Mott be elected as an honorary member’.

First principal Bernard continued, by saying that in 1968 the chapter achieved its centenary with a booklet produced to mark the occasion by Albert Ley. That booklet would be passed around the festive board later for all to peruse. In 1994 the 125th anniversary was celebrated with a magnificent cake made by John Walsh. The centenary celebration was held later than expected due to the fire at Liverpool Masonic Hall in October 1968. This meant the closure of the hall for quite some time, so the chapter re-located to Eberle Street and the celebration took place there on 8th May 1969. With the fire at Hope Street and the loss of much of the property and furnishings, the centenary meeting went ahead thanks to the assistance of St John of Jerusalem Chapter No 203, who let the chapter use their equipment and regalia. Bernard then mentioned how nice it was to see members of St John of Jerusalem present tonight and supporting the chapter. 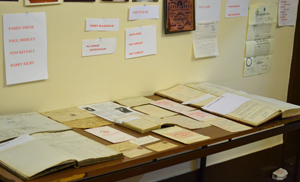 Memorabilia of Everton Chapter on display.

Bernard then spoke of the many great companions who passed through the chairs and many who have not, but all have equally contributed to the welfare and running of the chapter in those years. All the names of the companions for the last 50 years will be displayed at the festive board. Companions of the chapter were then invited to give their reminiscence of characters they remembered during their time in Everton. The first to do so was Peter Blazey, who was first principal at the 125th celebration and the longest serving companion of the chapter in attendance. Peter was followed by others and between them many warm memories were brought back and for a time all those companions now departed came back into the room for that brief period of time.

With the closing of the 150th celebration, Bernard handed over to Clive Jefferies for another extra special occasion taking place on the evening. Clive started by saying how interesting it had been to listen to what had been said about the chapter and to learn of the experiences of other companions. His first contact with Everton Chapter was in the 1990’s, which was his very first Royal Arch representation. The charity steward was Tom Liddell and Scribe Ezra Mike Winterbottom and the charitable donation on the night equalled the number of the chapter; £823. Clive continued by saying how in 2005 he was appointed as Assistant to the Provincial Grand Principals and that Everton Chapter was among those for which he was responsible. The following year Everton Chapter accorded him with the particular privilege of honorary membership. With the demise of his mother chapter (St Margaret), Clive had to subscribe to another chapter and the choice was one he had never for one moment regretted, he was admitted as a subscribing member of Everton Chapter.

Clive next said that the meeting today was not just a 150th anniversary, it was also the 50th anniversary of Stan Sutch as a Royal Arch Mason, and this will be celebrated likewise, (but will merit a separate news article on the Provincial website). On completion of the business for the evening, the companions moved to the adjacent banqueting suite for a delightful festive board.

Pictured from left to right, are: Tom McLaughlin, Bernard Ashley and Jorge Perez.