James (Jim) Howarth Wilson, patriarch of the Lancaster and District Group for the last 10 years, retired from office at this month’s meeting of Provincial Grand Lodge. This momentous event has been marked by a special retirement dinner held at Wyrebank, Garstang, with a multitude of tributes led by Provincial Grand Master Tony Harrison. 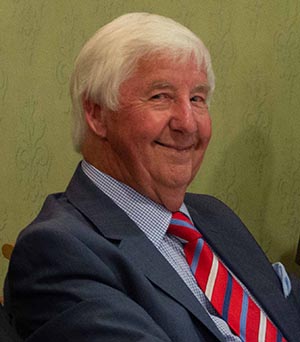 So, let’s take a quick look back at some of the amazing Masonic history of this prodigious Freemason who was initiated into Carnforth Lodge No 4951 on 28 April 1971. Elected lodge treasurer in 1973 Jim became master in 1982 and also served the lodge as assistant director of ceremonies and director of ceremonies. He was a director of Carnforth Masonic Hall from 1985 to 2008. Provincial rank came in May 1989 when he was appointed to the acting rank of Provincial Grand Steward with promotions to Past Provincial Deputy Grand Superintendent of Works in May 1993 and to Past Provincial Junior Grand Warden in October 1998. Grand rank followed in 2002 with the award of Past Assistant Grand Director of Ceremonies and further promotion in 2013 to the rank of Past Junior Grand Deacon.

Jim, of course, is also a member of other Masonic orders and has held many offices where his demeanour, knowledge and skill have been used to the benefit of the brethren and companions. Indeed, if he has demonstrated one abiding passion it has to be in the areas of charity and care where he was Group Hamer representative from 1983 to 1994, Group Charity Delegate from 1995 to 2002 and Regional Care Officer from 2003 to 2007. When Jim was appointed to Grand Lodge he responded to the congratulations of the brethren by saying: “It came as something of a surprise to me to have my efforts rewarded in such a way, as I have always derived great personal pleasure and satisfaction from assisting those who have sought my help.”

Jim was appointed as Lancaster Group Vice Chairman in May 2007 and became group chairman the following year in May 2008, leading the group to the success and respect it enjoys throughout the Province.

In proposing the toast to Jim, Tony Harrison said what a great honour and privilege it was to do so. He apprised the brethren on key landmarks of Jim’s personal history before paying tribute to Jim’s Masonic career. Tony emphasised how important the role of group chairman was to the smooth running of the Province and how exemplary Jim had been in discharging his duties. He wished Jim the very best of good health and enjoyment in his well-earned retirement. 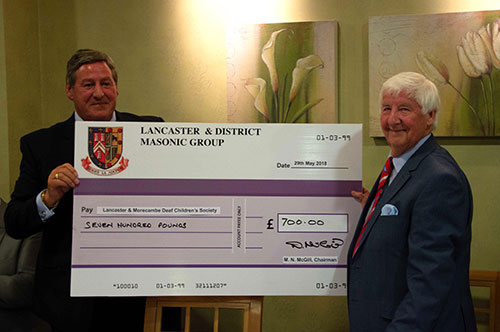 Jim (right) receives a cheque in support of his nominated charity from Neil.

In his response Jim started by jokingly saying that he felt that his life had just been laid bare, so he would now ‘put some meat on the bones’. He expanded on the great satisfaction he had gained working in the field of Masonic charity and care. He expressed notable thanks to a number of brethren who, he said, had been significant in their help and support including Howard Jones, Peter Hosker, Rowley Saunders and Keith Kemp. Jim thanked all the APrGMs for their help and support with particular reference to David Grainger with whom Jim had worked so well.

Jim paid tribute to the close relationship that existed with the Furness and South Lakeland Group and thanked the ‘new team’ of Neil, Scott and Chris together with Bernard Snape and Wyrebank.

In closing, Jim said: “The saying goes that ‘the King is dead – long live the King’. Well, this King is just lying down”, which brought a rapturous standing ovation.

Neil McGill then presented a photograph of Jim with the Provincial Grand Master and brethren taken at Provincial Grand Lodge and two original paintings of Morecambe seafront by a local artist. Jim was also absolutely delighted to receive a cheque in the sum of £700 for the Lancaster and Morecambe Deaf Children’s Society, a charity which had really impressed him and needed support. Finally, Keith Halligan of the Furness Group came forward to present a new ‘steward’s wand’ that he had made especially after Jim had asked to borrow one from their group.