The principle guest for the installation meeting of the Swinton Chapter No 6100 held at Swinton Masonic Hall was Assistant to the Provincial Grand Principals Duncan Smith. 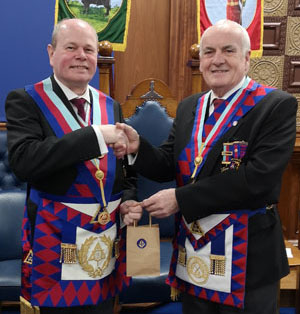 On arrival, Duncan was welcomed by Eccles Group Vice Chairman Patrick Walsh who presented Duncan with a bag of the traditional Eccles cakes to which he gratefully received.

The chapter was then opened by the first principal Mal Walters and his co-principals, and after the initial business of the chapter was completed Duncan was then admitted to the conclave accompanied by grand officers including Tony Edden and Patrick Walsh.

Following the investiture of the officers, the address to the three principals was given Roy Heneage, that to the officers by Malcolm Roberts and that to companions of the chapter by Duncan Smith. 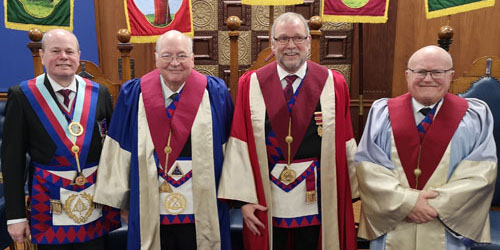 At the end if the installation, Duncan Smith rose and brought greetings and congratulations from the Grand Superintendent Tony Harrison to the three principals and wished them every success for the year ahead and hoped that the first and second principals have a good installation at some time in the future. He also congratulated the officers taking part in the ceremony.

Mal then presented two cheques to Duncan; one for £150 to the WLFC and £150 to the Swinton Masonic Hall Building Fund. Duncan returned thanks on behalf of the recipients for their kind donation.

Following communications from Supreme Grand Chapter, Duncan and his party retired. The business of the evening was then concluded and Mal Waters closed the chapter by command of the three principals. The companions then retired to enjoy the festive board.

Article by Tom Fredrickson and photographs by Patrick Walsh.