Downshire Lodge No 594 was founded in 1851 and has a long tradition connected to the nautical and seafaring community and the good ship Downshire has sailed on effortlessly over the seas of passion without quitting the helm of rectitude for a good 167 years. 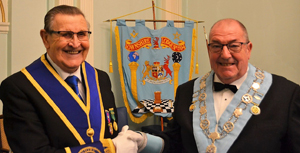 George Shields of Victoria Lodge No 4629 (left), congratulates his longstanding friend Adrian on attaining the chair once again

This year, a packed Adams Suite at Liverpool Masonic Hall, saw the ship placed firmly under the control of Adrian McLoughlin, at their annual installation meeting. With the lodge being opened by the WM Colin Harrop and the early business being completed, the brethren stood in respect of departed merit for their director of ceremonies Alan Riddell, who had died while on holiday only a couple of weeks previous.

On conclusion of the silence, the assistant director of ceremonies Geoffrey Gill informed Colin that Assistant Provincial Grand Master Derek Parkinson was outside the lodge and demanded admission. Accompanying Derek were fellow grand officers David Kemp representing the Liverpool Group and David Hawkes. Colin gave Derek a very warm welcome and also proffered him the gavel of the lodge, which was received with equal sincerity in a particularly brief acceptance, as Derek stated emphatically, with a broad smile, that he was here to have a pleasant evening and wouldn’t dream of depriving Colin and his fellow brethren the opportunity of displaying the efforts of all their hard work. 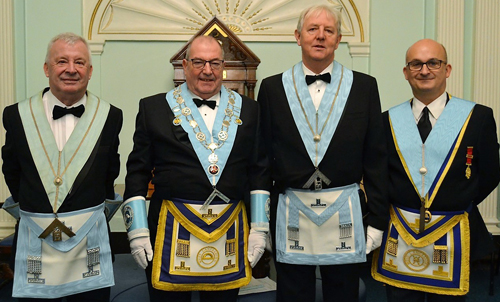 For the purpose of installation, Paul Clements was asked to occupy the chair of senior warden, Len Farrell that of junior warden, with Peter Francis as inner guard. The master elect Adrian McLoughlin was presented to Colin and asked the usual questions, before being installed into the chair of King Solomon in an excellent ceremony.

Brethren were then admitted by rank and Adrian was presented as the master for the ensuing year by the lodge ADC Geoffrey Gill who was leading the brethren with the salutes for each degree. The third degree working tools were presented by Craig Copeland, while those of the second degree were given by the lodge webmaster Gareth Schoorl and of the first degree tools by Andrew Zachariades, all performed in an excellent manner.

Adrian’s first duty was a pleasurable task, in presenting Colin Harrop with the immediate past master’s collar and jewel. He then continued to install his officers for the year with their respective collars. The address to the junior warden Oliver Winder was given by Len Farrell, while Pete Francis gave the address to the inner guard Alex Gould. The addresses, first to the stewards, was by Paul Copeland and that to the WM given in an equally excellent manner by Geoffrey Gill, while the address to the wardens was by David Kemp and the final address, that to the brethren of the lodge, was delivered by the distinguished guest Derek Parkinson.

At the completion of the ceremony, Derek congratulated Adrian on being installed into the master’s chair, in what he said was a very enjoyable ceremony. He also made a point of congratulating the installing master Colin Harrop, together with those brethren who had delivered such an excellent rendition of the working tools. In response, Adrian presented Derek with a number of cheques to the total of £950, as donations to charity from the brethren of Downshire Lodge. These proved in favour of the MCF 2021 Festival receiving £500, Cancer UK £150, Friends of Tithebarn £150 and the final gift in memory of lodge DC Alan Riddall to the West Lancashire Retired Greyhounds Trust, also for £150

On conclusion of the ceremonial, the attendees removed to the festive board to toast the health of the newly installed master, under the control of the newly invested DC Terry Longworth. Later in the evening and in response to the toast to the grand officers, Derek took the opportunity to extend his own personal greetings to the WM and the brethren assembled. The evening was enhanced by the presence of a number of guests, old friends and new, while the traditional master’s song was delivered in his distinctive dulcet tone by Norman Pritchard, accompanied on the pianoforte in thunderous style by Downshire’s own Oliver Winder. The evening came to an end in a relaxed mood after an excellent evening’s work. Derek Parkinson and David Kemp received bouquets of flowers to take home to their respective partners. 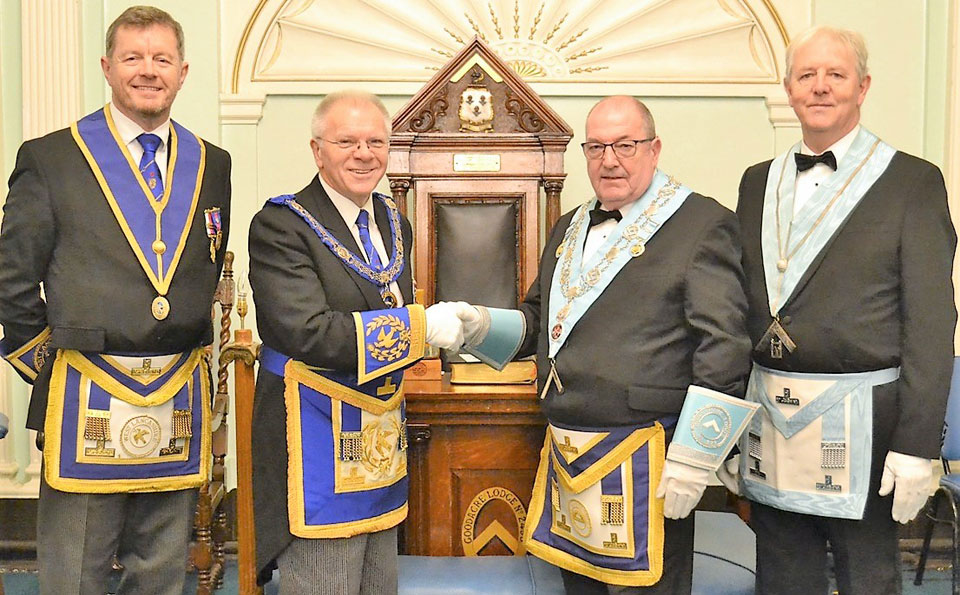