It was a joyous yet melancholy evening for Harry Cox at Cleveleys Masonic Hall when he was principal guest at a dinner to mark his retirement from his position as Assistant Provincial Grand Master. 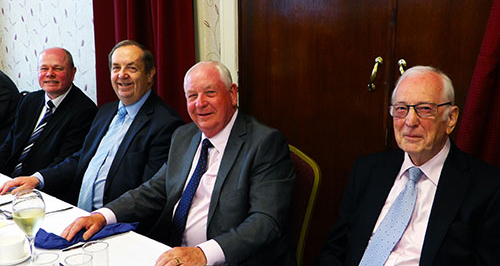 His five years in the post has been memorable for him and, whilst looking forward to his retirement, he will look back on his tenure with countless happy memories. He has worked tirelessly for the North Fylde and Blackpool Groups and his cheery, outgoing personality has gained him the respect of Masons throughout the Province and beyond.

Bulging at its seams, restrictions had to be made on the number attending the dinner. The dining suite at the Masonic hall in Cleveleys can cater for approximately 110 attendees and the demand had vastly exceeded that number. Masons from the North Fylde and Blackpool Groups and others from all corners of the Province had sought tickets. There is little doubt that the numbers wishing to attend would have warranted a venue large enough to cater for a Provincial Grand Lodge meeting – but Harry requested the intimacy of Cleveleys Masonic Hall. Such is the modesty of the man and, as he later revealed, his Masonic career begun at Cleveleys and the hall represented a major part of his grass roots Masonry. Consequently, he felt that Cleveleys Masonic Hall was the only fitting venue in which to bring his tenure as Assistant Provincial Grand Master to a close.

That sentiment vividly illustrates Harry’s love of grass roots Masonry and his immense contribution to the continued success of Masonry on the Fylde. Harry has always devoted himself to the ‘ordinary’ member by encouragement and a deep-seated interest in the development of the individual. Little wonder that he is so widely admired. He has been and remains a Mason’s Mason – one of the boys. 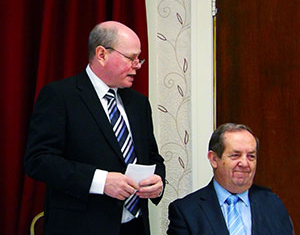 A cheery and relaxed mood descended on the hall as the masses assembled for the celebration. Countless fellow grand officers arrived, along with Provincial grand officers and ‘light blue’ brethren – such is the extent of Harry’s popularity. Yes, there were plenty of high ranking Masons but, as would be expected, young fresh-faced Masons were also in abundance. It was an evening at which all ranks of Masonry were present to share in the celebrations. Old and young; highly experienced and raw rookies mingled and chatted as equals. There was a common thread throughout the proceedings; a desire to show admiration and respect for Harry. It was a perfect example of the finest qualities of Freemasonry – one that Harry would fully endorse.

The catering was first class. The wine flowed freely and an ambience of sheer joy prevailed. Grand officers and Provincial grand officers were uniformly dispersed amongst newer and younger brethren to ensure perfection of camaraderie – Freemasonry at its best!

The formalities of dining concluded, it was time for tributes and speeches. These too preserved the order of joy and relaxation. Assistant to the Provincial Grand Principals and past Chairman of North Fylde Group Duncan Smith proposed the toast to Harry. Providing a brief synopsis of Harry’s Masonic career, Duncan illustrated why Harry is so well respected and admired.

Starting by stating that he has known Harry for over 25 years, Duncan shared with his audience that, on first meeting him, his impression was that Harry was a perfect gentleman and that over the 14 years in which he has worked closely with him, that opinion has never wavered. To Duncan, Harry epitomises an individual who looks for the good in people and possesses the talents with which to bring out the best in them. 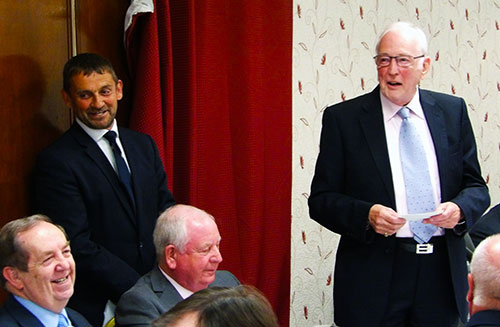 From the moment of joining Freemasonry, Harry was destined to become a high ruler within the Province. His outgoing personality and the instant respect that he gains from people was bound to be recognised.

Harry was initiated into Anchorsholme Lodge No 5854 in March 1977, having been on a waiting list for four years. 13 years later he was installed as master of the lodge – there were no accelerated promotions in those days. Harry acted as director of ceremonies and secretary of the lodge before being recruited into the North Fylde Group team as secretary, under the chairmanship of Chris Band. In addition, Harry was lodge social secretary for 12 years, Cleveleys Masonic Hall Joint Lodge Committee Treasurer for six years, bookings secretary for the Cleveleys Masonic Hall for seven years, secretary of the North Fylde Group Ball Committee for four years (when numbers in attendance were in excess of 300) and Deputy Captain of Stewards at Provincial Grand Lodge in 2005.

As for Provincial honours, Harry was appointed Provincial Grand Steward in 1994 and was promoted to Past Provincial Junior Grand Warden eight years later. In United Grand Lodge, he received the rank of Past Assistant Grand Director of Ceremonies in 2008 and now holds the extremely high rank of Past Senior Grand Deacon.

His Royal Arch career in Anchorsholme Chapter No 5854 is equally impressive and followed a similar course to that of his Craft Masonry, being installed as first principal in 1998, receiving the rank of Past Provincial Grand Scribe Nehemiah six years later and the grand rank of Past Grand Standard Bearer in 2010.

Harry is also a grand officer in the Mark Degree and a member of Semper Fidelis Royal Ark Mariners, not forgetting that he is also a past master and past first principal of Senatores Lodge of Installed Masters No 8966 and Senatores Chapter of Installed First Principals No 8966 respectively. He is also a member of Quingenti Lodge No 8516, the Provincial Grand Stewards Lodge. 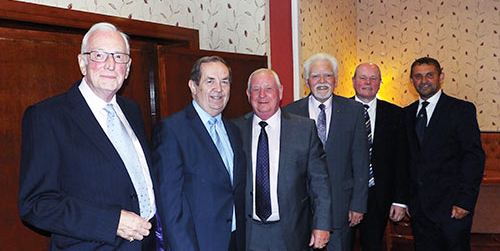 Duncan’s close association with Harry began in 2004 when he succeeded Harry as North Fylde Group Secretary and they have been good friends ever since. Addressing his remarks directly to Harry, Duncan thanked him for all he had done for him during his own Masonic career and for his invaluable friendship, loyalty and support. He said that he and his wife Karen had spent countless events with Harry and his wife Carol and had enjoyed every single occasion – some of which he can remember in full!

Expanding on his recollections, Duncan said: “Karen and I have many happy memories of our trips together, with many laughs along the way and I’m sure that they will continue for many years into the future.” He continued by stressing the tremendous support that Carol had given Harry over the years, describing her as ‘an absolute treasure’.

As Assistant Provincial Grand Master, Harry has had the responsibility of the Provincial Care System, no easy task during a period of major change and in retirement, is leaving it in a position that is greatly admired by his colleagues at United Grand Lodge and very much appreciated by members of the fraternity.

Harry was also on the Provincial Ranks Committee, a task that involves an enormous amount of time and effort sifting through and studying a huge book of Masonic CVs every year.

Diverting to Harry’s retirement, Duncan reminded Harry of its advantages. Largely, Harry will be in a position to select the meetings he will attend, arranging his itinerary around his family life rather than fitting his family into a crazily busy Masonic diary. He further reminded Harry that he and Carol will in future be in a position to travel the world when they wish to; spend more time together in their immaculate garden (and enjoy summer evenings with a glass of wine); and be free to see their children Sharon and Darren and their grandchildren Amy, Emily and little Harry as often as they wish, enjoying fishing trips, bowling and numerous other activities that have often been impossible in the past. The thoughts of these advantages brought a gratifying smile of appreciation to Harry’s face, adding further to the twinkle that is always in his eyes.

Thanking Harry on behalf of all the members of the North Fylde and Blackpool Groups, and the Province as a whole for what he has done over the years, Duncan presented Harry with a gift from the groups as a token of their appreciation and respect.

When the standing ovation for Harry had finally subsided, Harry delivered a modest and moving response, thanking everyone for the support and friendship he had received over the years. He was noticeably moved by the tremendous turnout of fellow group officers, grand officers, Provincial grand officers and rank and file members. 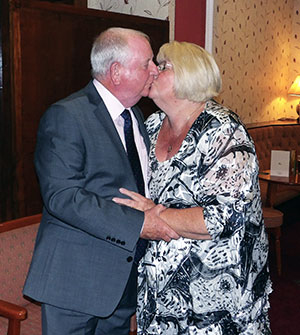 Harry was delighted to welcome his wife Carol after the dinner.

Typical of Harry, his response concentrated on his thanks to all who had helped him, supported him and shown him friendship during his Masonic years. He spoke of everyone else’s qualities, praised others and gave credit to others. That is the quality of the man and his words reaffirmed Duncan’s opinion of Harry as a perfect gentleman; modest, appreciative and caring.

Hanging on every word, Harry’s audience was treated to a masterclass of public speaking. Composed, clear and crisp, warm and cheery, Harry entertained the throng with quips and reminiscences.

His composure did wane however when he paid an emotional tribute to the support that he had received from his wife Carol. It brought a lump to his throat. His eyes moistened. His gratitude and affection could not have been more poignantly expressed. He felt that it was time for him to sit.

Sufficient time for another standing ovation to subside had to be allowed before Chairman of North Fylde Group Peter Greathead could bring the formal proceedings to a close, a task he performed with cheery wit and charming grace, qualities that Peter has perfected over the years.

Although the celebrations had been to honour Harry Cox’s retirement as Assistant Provincial Grand Master, one thing is very clear – Harry Cox will continue to visit lodges and chapters, encourage young Masons, support his Masonic colleagues, and bring pleasure and joy to Freemasonry throughout the Province. He will remain at the crease for a very long time.

It was a full house for the celebration.