Always confirming the fact that he thoroughly enjoys his Freemasonry, Grand Superintendent Tony Harrison was even more cheery than usual when he attended the installation convocation of Blackpool Chapter of Sincerity No 4175 as its principal guest. Closely following the proceedings and hanging on every word, Tony revelled in the spectacle and ritual of the occasion. His pleasure was clear to see. 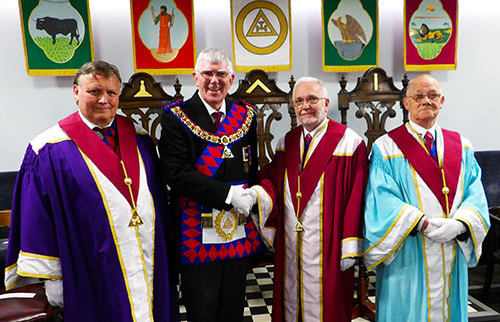 Orchestrating the schedule and ensuring a smooth progression of its components, chapter director of ceremonies Jonathan Selcoe displayed his usual flair for organisation of all things Freemasonry. Reliable, meticulous and bursting to the seams with excellence, Jonathan brought his years of experience to bare and ensured a show that was a delight to all who were privileged enough to be in attendance. Jonathan was not flustered by the presence of the Grand Superintendent and his retinue of distinguished Masons. He remained cool and efficient, confident and professional – exactly as one would expect of him.

And it was the structure and organisation amongst other things that gave the Grand Superintendent particular pleasure. Performers were not limited to just a few of the chapter’s more experienced members. The work was distributed to a large cross-section of its companions. Senior members stood squarely with newer and junior members. Older members and younger companions worked together as a well-oiled machine, producing a show with variety and added interest. It was a model for other chapters and lodges.

Opening the convocation and discharging the chapter’s general business with alacrity, the three principals Kevin Ricketts, James ‘Jimmy’ Rogers and Denis Askham provided a disciplined ceremony in which Jimmy was duly installed as first principal, Denis as second principal and Granville Coxhill as third principal. A particularly impressive performance was given by Kevin Ricketts in installing Jimmy as his successor. His performance was authoritative and confident, presenting a masterclass in ritual throughout the meeting. Deservingly, it was highly praised by the dignitaries and proletariat. 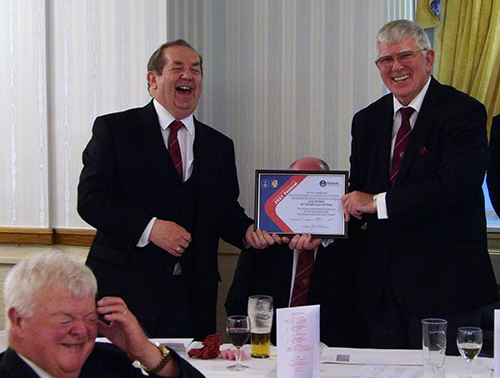 Tony Harrison (right) shared a joke with John Turpin (left) and Bob McGown (seated) while displaying the certificate that acknowledges the chapter’s Vice Patronage of the MCF 2021 Festival.

When the three principals had been duly installed into their respective chairs, the proletariat was treated to a plethora of superb addresses. Often promising to be a highlight of any installation ceremony, the three robe addresses were not to disappoint. First off the mark and setting an enviable standard was Roy Fenton with a faultless robe address to the first principal, followed by an equally magnificent address to the second principal by Jonathan Selcoe. Bringing up the rear and reinforcing his reputation as a wizard of ritual was Paul Easton with a scintillating rendition of the blue robe address. They were a tremendous and triumphant trio.

David Cook, later to be dubbed ‘chatterbox’ by the Grand Superintendent, is a passionate Freemason and renowned ritualist, demonstrating his talents with creativity and stimulating animation. His address to the immediate past first principal and subsequent address to the three principals were a lesson in excellence; clear crisp and sincere. Both addresses are complex pieces of ritual but David has the ability to make them appear spontaneous and uncomplicated.

Following David’s address to the immediate past first principal, officers of the chapter were invested with the collars of their offices in a dignified and well-orchestrated sequence. Particularly pleasing was the number of young companions taking office, with each visibly enthusiastic about their forthcoming roles.

It was then back to excellence in ritual when Jonathan Selcoe and Duncan Smith recited addresses to the officers of the chapter and to the companions respectively. They are both of a nature that cannot deal in half measures. Whatever they do they do with utmost commitment and panache. They approached their respective pieces with confidence and zeal, well aware that weakness at such a time could be fatal. But there was no need to worry. Both were immaculate.

In addition to the excellence of ritual, the pleasures of the ceremony were further enhanced by the musical accompaniment served up by chapter organist John Wall. Lyrical and appropriate to each section of the proceedings, John’s contribution added entertainment value and emotive stimulation.

All these factors were enthusiastically acknowledged by Tony Harrison at the conclusion of the ceremony, paying particular attention to the brilliance of the three robe addresses. His joy was further kindled on the announcement of the chapter’s charitable disbursements. A donation of £1,200 to the Masonic Charitable Foundation 2021 Festival which, when added to a previous donation of £300, entitled the chapter to be awarded Vice Patronage of the Festival, a landmark that the Grand Superintendent was delighted to recognise with a presentation of a certificate of attainment.

The presentation was further warranted by the addition of a £350 donation to the Festival by the chapter’s charity steward and group Festival representative Peter Green who had held a garden party at his home the previous day. But more was yet to come. In addition to the donations to the MCF 2021 Festival, a further £100 was donated to the Blackpool Masonic Club.

Bringing the convocation to a close, Duncan Smith responded on behalf of the grand officers at the first rising and reiterated the approbations expressed by Tony Harrison. Similarly, Jack Monks was equally lavish in his praises when responding on behalf of the Provincial grand officers, focusing much of his attention on the excellence of Kevin Ricketts’ faultless ritual.

After the retirement of grand and Provincial grand officers and closure of the convocation, the remaining throng retired to the comforts of the lounge bar to wrestle with a few restoratives before beetling off in high spirits to the dining suite and a sumptuous festive board. Understandably, spirits were high. The whole fixture had been a magnificent success and worthy of special celebration. There was a buzz of enjoyment in the air. Companions chatted freely. Wine flowed freely and a mood of revelry was in abundance. 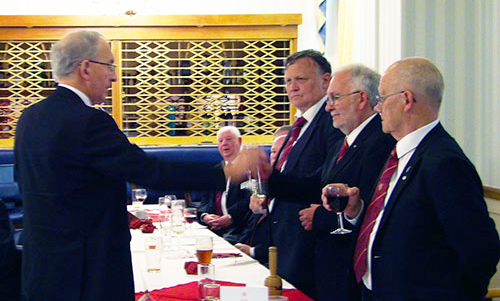 After pushing a generous dinner into their frames and feeling well-fortified by the delicacies provided, the revellers settled down to the traditional selection of speeches. In the customary order, the first orator was Duncan Smith, responding to the toast to grand officers and proposing the toast to the Grand Superintendent.

Applying the maxim of ‘if a thing is worth doing, it is worth doing well’ Duncan exceeded the principle. He addressed the gathered throng in a flood of eloquence, only pausing intermittently to allow the applause to subside. If he had been speaking of Horatio Nelson, the Duke of Wellington or Winston Churchill, he could scarcely have been more complimentary.

In his response, Tony was relaxed and in mischievous mood, socialising with his audience in jocular banter. It was at this juncture that Tony dubbed David Cook as ‘chatterbox’ when he intervened in a chit-chat between David and Roy Fenton. A loud cheer from the gathered throng secured the nickname for eternity. David Cook is now officially ‘Chatterbox’.

Throughout the evening, things had got better and better. The mood was light and airy. The ceremony had been crisp and professional. The chapter had secured a brilliant success. It seemed as if the brethren had been on velvet from the start. And rounding off the occasion in perfect style, David Harrison belted out the principals’ song in splendid style while John Wall cranked up the crochets and semi-quavers with dexterity and gusto on the piano. The whole evening can only be described in a single magical, benevolent and pleasurable phrase – Royal Arch Masonry at its best!