The hugely successful dinner with boxing evening organised by the Furness and South Lakeland Group is held under the auspices of Kendal Amateur Boxing Club. Also featuring on the card for this annual event at the Cumbria Hotel, Grange-over-Sands are pugilists from the Barrow ABC and the Furness Catholic ABC.

Pictured in the centre of the rear row, from left to right, are: Barrie Bray, Jeff Moses, Gary Rogerson and Matty Woods.

The occasion generates a considerable amount of money for good causes with the amount raised in 2018 exceeding £11,000. It is perhaps only fitting that part of the proceeds are given as donations to the three boxing clubs.

Jeff Moses who runs Barrow ABC extended an invitation to boxing committee chairman Barrie Bray to visit the club and see the use the donation was put to.

Barrie, accompanied by group vice chairman Gary Rogerson, Matty Woods and Dave Sear went along to the Brook Street premises in Barrow-in-Furness to meet with Jeff.

Jeff explained: “We start the evening with the youngsters aged from six to 10 who are learning the basics. They cannot box competitively until they are 10 and have proved they are capable in unmarked skills contests. The aim is to teach them the rudiments of the game, improve their fitness levels and instil in them the discipline to turn up for every session.”

Barrie and the other Masons watched as Jeff and his team of volunteers went to work. There were some 30 boys and girls present who were split into three groups. Whilst one group were doing fitness training another was on the punch bags whilst the third was in the ring. with Jeff being taught some ring craft.

There was no slacking, as Barrie observed: “I was impressed by the discipline of the youngsters. There were no moans or groans as they enthusiastically went about the different aspects of the training. There were no late-comers and both the boxers and their instructors seemed to thoroughly enjoy what they were doing. I was pleased to see what our donation was helping to support.” 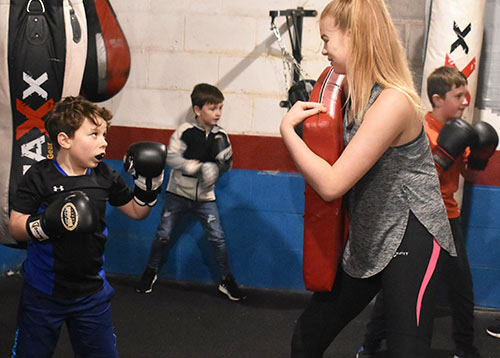 Pictured front left is the ‘trainer of the week.’

There is no charge for the youngsters although those who can afford it are asked to donate the princely sum of £1. This money is used to reward those who try hard and are rewarded with a voucher to purchase a club vest from a local supplier. Quite often that recipient of the voucher is from a less privileged back-ground.

After each session, one of the girls or boys is awarded a trophy, which they keep for a week, as the best trainer. On this occasion Dave Sear was given the task of selecting the recipient of the trophy.

Dave later commented: “Jeff and his team of volunteers are to be congratulated for the role they play in our community. They, and the myriad of other volunteers in other sports, give of their time and energy to engage with youngsters and keep them occupied in doing something beneficial to their health and development as people. They deserve our thanks.”

In future years there is no doubt that some of the young boxers will put their training into practice and feature on the card at the Cumbria Grand. They will be following in the footsteps of the likes of Ross Cooksey and Liam Conroy who fought at the Furness and South Lakeland event in past years and have now moved on from Barrow ABC to pursue professional careers in the ring. Liam, who fought in the headline bout three years ago, is shortly to fight for the British light-heavyweight title and the accompanying Lonsdale belt.

The visit received coverage in the local press but what is a mystery is how Barrie, Gary and Mattie ended up featuring in the photograph of the ‘junior team of the week’! 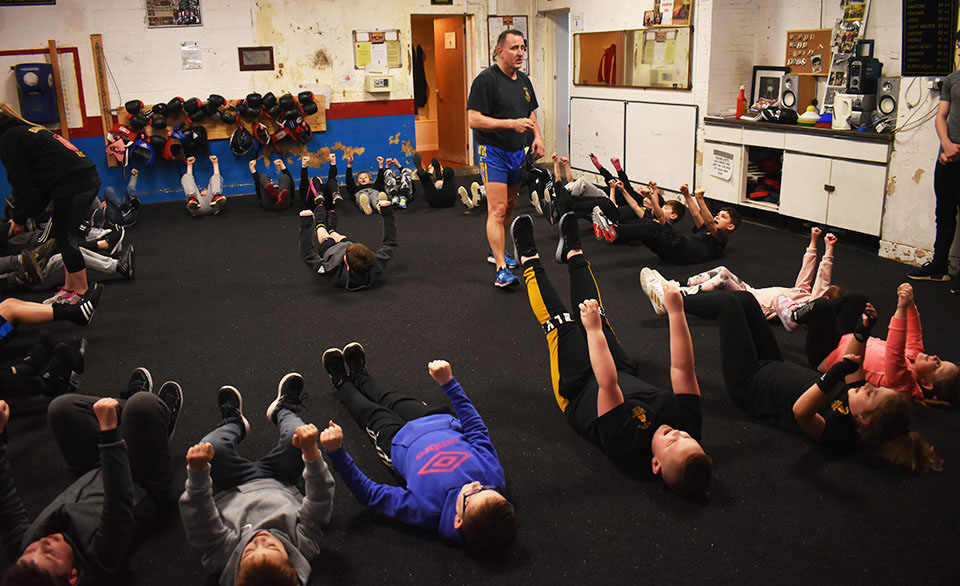 A fitness workout in progress.