The latest incumbent of the chair of the first principal of Abbey Chapter No 1225 is Tony Bayliff. He was installed by his predecessor Derek Forrest in what was an excellent ceremony at Barrow-in-Furness Masonic Hall.

The chief guest on the evening was Past Second Provincial Grand Principal Chris Band. He was accompanied by fellow grand officers Alan Jones and Barrie Crossley, along with group vice chairman Gary Rogerson and group secretary Alan Pattinson.

Acting Provincial grand officers Andrew Bartlett and Peter Pemberton had made their way to the top of the Province from the Lancaster Group to join up with their northern compatriots Tony Cassells and John Browne.

There being some 60 companions in attendance the meeting was held in the main temple rather than the designated chapter room which would have struggled to cope with the numbers.

Albeit, Derek’s workload was reduced as Tony is a past first principal of the chapter, having served in that office in 2008, he nonetheless went about the business of installing his successor in a quiet, accurate and sincere manner.

In turn, Tony installed Peter While as the second principal with Peter then performing a similar role as he inducted Gordon Evans into the office of third principal. Both of these were first time appointments.

The trio of installing officers can each reflect on a job very well done. The scripture readings were undertaken by junior members in the persons of Steve Renney, Gary Gibson and Paul Musgrave. It was readily apparent that they had dedicated some time to rehearsing their orations which paid dividends as their work was a delight to listen to. 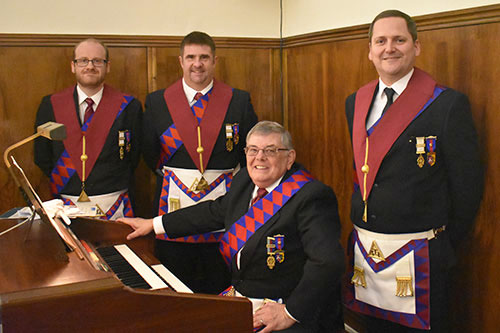 The robe and sceptre addresses were faultlessly delivered by Tony Cassells, Stuart Anderson and Steve Renney.

The investiture of the officers was carried out in a dignified but abridged manner as those who were being reappointed simply acknowledged their retention in office with a court bow. This seemed to be very well received.

The ceremony thusfar having proceeded in splendid fashion it then fell upon the shoulders of those delivering the addresses to maintain the standard which had been set. Derek Leviston, Keran Stalker and Chris Band did not disappoint in undertaking respectively, the addresses to the principals, companions in office and the companions of the chapter. They were orated in three distinctly different styles, but all proved accurate and easy to listen to.

Not all lodges and chapters nowadays have the benefit of music during their ceremonies but Abbey Chapter is fortunate to have as a member Andre Lawrence who is an accomplished organist. His melodies during the course of the evening added to the enjoyment of the proceedings and were much appreciated.

To mark the occasion Chris was presented with a cheque for £500 in favour of the West Lancashire Freemasons’ Charity.

The chapter director of ceremonies Tony Nevinson received great plaudits for not only the part he played during the ceremony but also the effort he must have put in to enable his charges to achieve the high standard of ritual which had been enjoyed by all present.

Similarly, long serving chapter scribe Ezra, Colin Clark was on the receiving end of great acclaim for the part he had played in ensuring the evening, and indeed the year, had run so smoothly.

Following the formalities of the ceremony the newly installed three principals, the members and their guests continued to enjoy the evening as they adjourned to the Fairfield Suite for food, wine and continued friendship.