The recently spruced up Dalton in Furness Masonic Hall was the setting for the installation meeting of Baldwin Chapter No 1398.

The hall is situated at the end of a small terrace and was originally built as the Liberal Club. The building was taken into use for Masonic purposes in 1946. During the summer break this year the opportunity was taken to undertake a much-needed refurbishment of the premises.

This work included the guttering and drain-pipes being replaced. All the windows were removed and replaced with ones of a better specification. Whilst the scaffolding was in place for this work volunteers from the two lodges which meet in the building painted the exterior. It has certainly improved the appearance of the hall and made it stand out.

Internally laminate flooring was fitted in the hallway and the dining area to replace what was rather worn carpet. More works, including a new boiler, are in the pipeline. 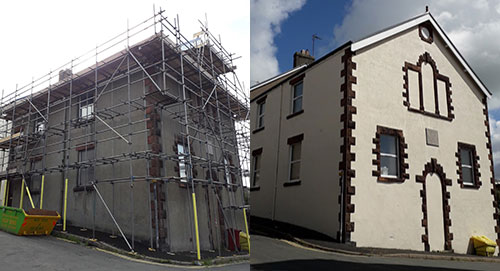 Adding their support were acting officers Andrew Bartlett, Tony Cassells, Peter Pemberton and John Browne under the guidance of Barrie Crossley. Andrew and Peter had made their way round Morecambe Bay from the Lancaster Group.

The Furness and South Lakeland Group were represented by vice-chairman Gary Rogerson and secretary Alan Pattinson.

They were all able to observe an excellent ceremony. Firstly Mike Benson installed Steve McKellar as first principal in his stead. Steve then placed Darren Stainton into the second chair whilst Mike was quickly re-cycled and installed as third principal by Darren. All played their part well and can reflect with satisfaction on jobs well done.

The robe and sceptre addresses were competently delivered by Malcolm Brown, Dave Sear and Bill Coates.

It would be unfair not to mention the work carried out in the chapter without making reference to director of ceremonies Graham Slater. A farmer by calling Graham brings his own inimitable rustic style to meetings of Baldwin Chapter. His mantra that members should deliver the ritual with accuracy but yet still take enjoyment from the work and enjoy the odd smile, when appropriate, is one that is well received by his charges and visitors alike.

To mark the occasion Ian was presented with a cheque for £250 in favour of the Masonic Charitable Foundation 2021 Festival.

Group charity steward Richard Wilcock was on hand to present a certificate denoting that this latest contribution made the chapter vice-patrons of the Festival. He was also able to announce that under a new allocation from the group charity account a further £250 in match funding would be credited to the chapter.

It will be a busy year for Steve. He is the director of ceremonies of Baldwin Lodge and this year was appointed as a Provincial Grand Steward at the meeting of Provincial Grand Lodge. In addition to this he not only has family and work commitments but also duties to perform as a volunteer with HM Coastguard service.

Following the ceremony, a three-course meal, the main course being Cumberland sausage was enjoyed downstairs in the hall dining room.

One thing the recent works on the hall has not had an effect on is the limited dining space available. The attendance of 56 members and their guests ensured that it was a very cosy environment but that only added to the enjoyment of what was a splendid occasion.