Brethren and guests of Prince’s Park Lodge No 4769 met at the Geoffrey Hirst Masonic suite within Woolton Golf Club for their penultimate meeting as in December 2019 they will be surrendering their warrant. In what can only be described as a sincere ceremony touched with sadness, the new WM was installed into the chair of King Solomon. 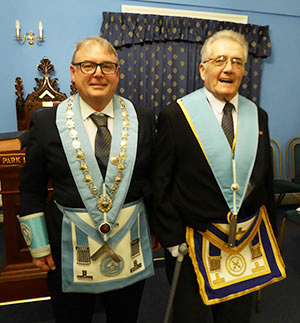 The lodge was opened in due form with the WM Peter Ryan processing into the lodge accompanied by his wardens and deacons. The minutes of the last regular meeting were confirmed and signed and the lodge was opened to the second and third degrees. The lodge director of ceremonies Andrew Mooney informed the WM and brethren that Assistant Provincial Grand Master Kevin Poynton stood outside the lodge and demanded admission.

Kevin entered the lodge accompanied by the deacons and a Past Deputy Provincial Grand Master Howard Jones and Woolton Group Chairman Andrew Whittle. Kevin was warmly welcomed by Peter Ryan and offered the gavel, which Kevin accepted but quickly returned it to safe hands.

Andrew Mooney offered salutations to Kevin and afterwards to Howard Jones and Andrew Whittle. Vic Albin took the salutations on behalf of the Provincial grand officers present. The lodge was adjourned to the second degree and past masters were requested to assist for the rest of the ceremony.

The master elect Geoffrey Cowan was presented by Peter Williams and reaffirmed his obligation as Geoffrey had been in the chair on two previous occasions, 2006 and 1984, after which the lodge was adjourned to the third degree. 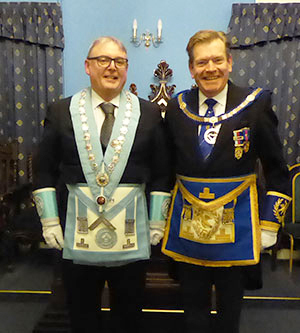 The WM Peter Ryan thanked all his officers and the brethren of the lodge for their loyal support, not only whilst he had been in the chair but during the years leading up to his installation. He then proceeded to install his successor in a very sincere manner.

The ceremony of installation being completed, Kevin rose to convey the very best wishes of the Provincial Grand Master Tony Harrison, saying that Tony hoped that WM would enjoy his short time in office, wishing him and all the brethren health and happiness. The installing master and all the brethren who had taken part in the ceremony were thanked by Kevin for showing such love and harmony. 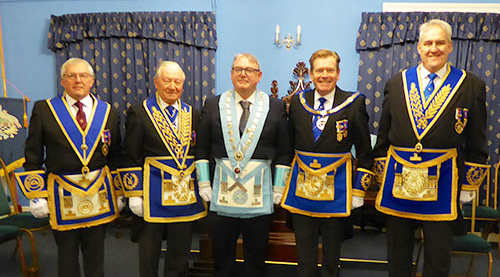 Geoffrey Cowan then had great pleasure in presenting two cheques to Kevin; the first for £300 for the Masonic Charitable Foundation 2021 Festival and the second for £200 for the West Lancashire Freemasons’ Charity. Kevin thanked the lodge for such a generous donation, bearing in mind there are only 13 of them and they had already donated £412 for charity during the year.

A collection for charity was taken and the secretary read the correspondence from Grand Lodge, after which Andrew Mooney formed the procession to retire. After further lodge business had been conducted, the lodge was closed in due form so that the brethren could retire to the dining room for pre-dinner drinks.

At the festive board Kevin, in response to the toast to his health, said that he was extremely pleased to be present especially being supported by two fine grand officers namely Howard Jones and Andrew Whittle. He thanked the lodge for its donation to charity and went on to say that the lodge was a happy one with many experienced Masons.

The evening was a great success although tinged with sadness, for at the next meeting in December 2019, the lodge had decided to surrender its warrant and the majority of the members would join other lodges within the Woolton Group. 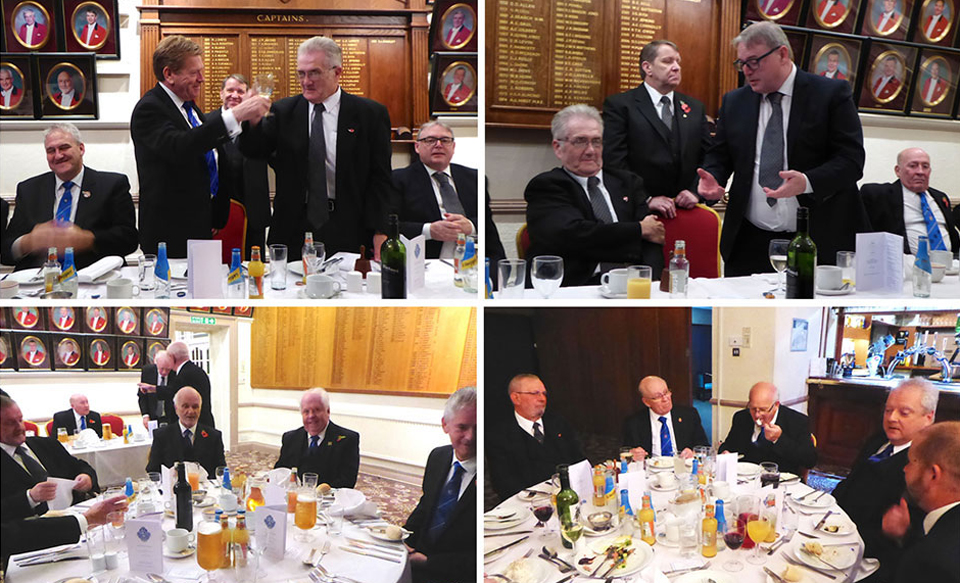