At a regular and installation meeting of Sandylands Chapter No 5702, companions saw Raymond Griffiths make a long-awaited return to the first principal’s chair, having last occupied it 28 years ago in 1990 and if his broad smile at the end of the ceremony was anything to go by, it had certainly been worth the wait. 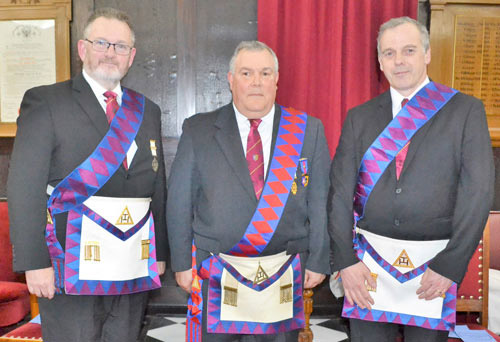 Pictured from left to right, are the companions who presented the robe addresses: Liam O’Leary, Larry Branyan and Stephen Nutter.

The companions of Sandylands Chapter were delighted to welcome Assistant to the Provincial Grand Principals Samuel (Sam) Robinson as the representative of the Grand Superintendent Tony Harrison. Tony is a member of Sandylands Chapter and was attending the meeting, however he was looking forward to taking a back seat on this occasion.

After the chapter had been opened by the first principal Donald Polson and the normal business of the chapter completed, protocol of course demanded that Tony be announced and escorted into the temple with due ceremony, accompanied by the representative and the other dignitaries.

Having been offered the sceptre, as his is right, Tony answered: I am thrilled to be here in my own chapter and I am looking forward to an excellent ceremony, but in order to achieve that you will need the sceptre”. and so it was returned to Donald. Tony then formally introduced Sam to Donald as his representative before taking his rightful place in the chapter.

In advance of the installation, Donald thanked, on behalf of himself and his co-principals, the members of the chapter for their help and hoped they would extended the same assistance to the principals in the year to come.

In an excellent ceremony, Carl Horrax continued his progression and was installed into the third principle’s chair, Allan Finney BEM, was installed into the second principal’s position and Raymond Griffiths the first principal’s chair. The delivery of the robe addresses saw fine performances from Larry Branyan, Liam O’Leary and Stephen Nutter as they were presented to the first, second and third principals respectively.

Following the appointment of the chapter officers, Sam delivered the congratulations and best wishes of the Grand Superintendent, even though he was only sat a few metres away from him. Sam remarked that Tony would have certainly wished to congratulate the three principals and indeed all who had contributed to such a unique ceremony. Tony also hopes that all the companions present continue to enjoy their Freemasonry to the full.

Pictured from left to right, enjoying the evening are: Raymond Griffiths, Keith Lamb and Donald Polson.

The immediate past first principal Donald, then had the pleasure of presenting Sam with a cheque for £150 to the MCF 2021 Festival as well notification of chapter disbursements to the Masonic sporting charities and the sum of £450 collected through the white envelope scheme. Sam, on behalf of all those people they will never meet, thanked the companions of Sandylands Chapter for their very generous donations.

A lively and very happy festive board followed in the Morecambe Masonic Hall dining room. Sam, in response to the toast to the grand officers, informed the companions of the donation of two brand new motorbikes from the WLFC to the North West Blood Bikes, complete with all the necessary additional equipment, to enable this voluntary organisation to continue supporting local hospitals. He then moved on to discuss the continuing need to support the MCF 2021 Festival and in the process thanked the chapter for their excellent donation earlier in the evening.

In conclusion Sam conveyed his delight at the way the ceremony had ben conducted and once again congratulated all who had participated.

As proceedings drew to a close, Donald proposed the toast to the health of the three newly installed principals, wishing them a happy and successful year ahead. He also thanked, on behalf of the chapter, Keith Lamb, Colin Westwell and David Walker for all their work.

In responding to that toast, the first principal Raymond Griffiths thanked Donald for the excellent manner in which he had been installed and expressed his wish that he hoped the principal guest had enjoyed a memorable evening.