Assistant Provincial Grand Master Derek John Parkinson, added glitter to Barrie Owen Lea’s golden jubilee, when he was welcomed to Grassendale Alliance Lodge No 667 to preside over the celebration. 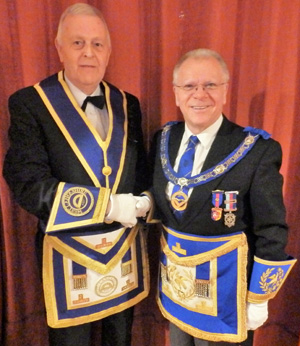 The meeting was opened by the WM David Foulkes, assisted by his wardens Derek Churm and Geoffrey Bird.  Following confirmation of the minutes of the last meeting, the lodge director of ceremonies Mike Molyneux, retired to inform Provincial Deputy Grand Director of Ceremonies Mark Barton, that the lodge was ready to receive the principal guest.

Mark was admitted and announced that APrGM Derek Parkinson was without and demanded admission. David replied that he would be pleased to receive him. The brethren stood as Derek entered the temple, accompanied by Gladstone Group Secretary Ian Sanderson and acting Provincial grand officers Daniel Senneck, Fred Dickenson and Paul Dooley. David welcomed Derek and after wishing him a pleasant evening, offered him the gavel. Derek responded that on this occasion he would be delighted to accept and take the master’s chair to conduct the ceremony for the celebrant. Once Derek was comfortably seated, Mark rose to conduct salutations to Derek, which on this occasion was the entered apprentice salute, five times. Derek thanked the brethren and greeted them well. Derek then proceeded to explain the reason for his attendance, the very pleasant duty of celebrating Barrie’s 50 years in Freemasonry. He first of all requested the inner guard Tony Tait, to invite the tyler to open the door and to enjoy the proceedings. Barrie was then placed in a chair in front of the master’s pedestal, whilst Derek reminded the brethren of a number of interesting items of news that took place in 1944, the year Barrie was born. The D Day Landings, the introduction of PAYE and the invention of the first dialysis machine by Willem Kolff.

Barrie was the only child of Norman and Ada Lea. When his father Norman registered the birth, the registrar asked how his name was to be spelt, with a y or ie, Norman shrugged his shoulders so it was spelt with an ie. His middle name Owen, was his mother’s maiden name. By that time, his parents had moved from their home in Wigan to Speke via Dagenham, to take up employment at the Rootes Factory, as Norman worked as an engineer in the automotive industry. During the war years, Rootes turned over production to building airplanes, producing over 4,000 planes to aid the war effort.

At the age of 17, Barrie became a police cadet prior to joining the force at the age of 19. He worked in several departments whilst continuing his education. Most of his career was spent in the CID. When he retired after completing 31 years of service, he had risen to the rank of superintendent.  Barrie then joined Barclays as a senior member of their Credit Risk and Mortgage Fraud Department.  Married to Jane, they have two children, Andrew and Rachel and four grandchildren. 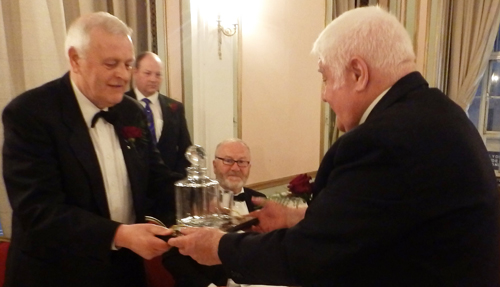 Initiated into Grassendale Lodge No 4808 at the Masonic Hall in Hope Street, in April 1968. At that point, Derek requested lodge secretary Keith Reid, to read an extract from the minutes as recorded on that evening. After progressing through the various offices, Barrie was installed as WM in November 1983. 11 years later he was appointed in Provincial Grand Lodge to the rank of PPrAGSuptWks. Derek then asked Ian Sanderson, to read the certificate which had been signed by the Provincial Grand Master Tony Harrison. Derek then presented the certificate to Barrie, congratulating him once again and thanking him for his contribution to Freemasonry and for his service to the local community. Loud applause followed, as Barrie was led back to his seat. Derek then asked the WM, if it was his wish to resume his chair. When seated, David rose and thanked Derek for his excellent presentation, he then presented a cheque to him for the sum of £300, made payable to the MCF 2021 Festival, Derek thanked the brethren for their generosity.

Following communications from United Grand Lodge, Mark called the two Provincial deacons Harry France and David Colling to order. Acting Provincial grand officers Paul Dooley, Fred Dickenson and Daniel Senneck took up their positions, as Ian Sanderson and Derek Parkinson retired from the lodge. The business of the lodge was concluded and when the lodge was closed and the closing ode had been sung, the remaining brethren joined Derek to enjoy a pre-dinner drink. 26 members and guests then took their seats to enjoy a fine meal with copious amounts of wine. As the ceremony had taken place on St George’s Day, everyone wore a red rose, courtesy of Jim Horne. The room was also decked with flags.

The toast to the grand officers was proposed by the senior warden Geoffrey Bird and gave Derek a further opportunity to thank Barrie and the members of the lodge for giving him the opportunity to be a part of Barrie’s celebration. Derek also spoke about the work of the publicity team who attended such celebrations and installations. He congratulated the lodge secretary Keith Reid on his promotion, which he will receive at the forthcoming meeting of Provincial Grand Lodge. Prior to the meeting, free PSA testing will be available to anyone in attendance. This follows a similar session, which was held at the meeting of Provincial Grand Chapter, which proved a great success. Derek also promoted the MCF 2021 Festival, urging any brother who had not already completed a direct debit, to do so as the festival was now one year into its four year run.

The toast to Barrie was proposed by Derek Churm, who had also celebrated his golden jubilee four month’s previous. Barrie then took the opportunity to thank both Derek and the rest of the members for making his night so special. He related many anecdotes before receiving a thunderous round of applause. Jim Horne then made a presentation to Barrie, a gift to mark his 50 years membership. The WM was delighted to present bouquets of flowers to both Derek and Ian, thanking them both for attending.

All too soon it was time for the last toast of the evening, which was proposed by the tyler. The end of a very memorable evening for Barrie, the members of Grassendale Alliance Lodge and all their guests.