The members of Amounderness Lodge No 7105 gathered together at Garstang Masonic Hall to celebrate Barry Forster Seedhouse’s 50 years in Freemasonry. The celebrations were led by Lancaster and District Group Chairman Jim Wilson, who was standing in at short notice for Assistant Provincial Grand Master David Grainger who had been taken ill. 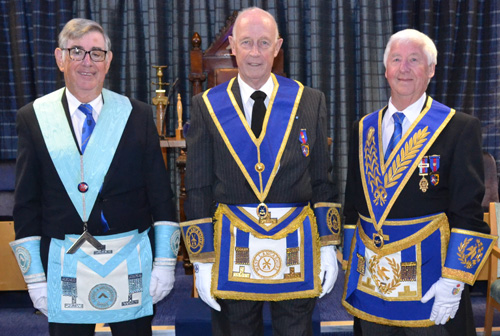 Pictured from left to right, are: David Emery, Barry Seedhouse and Jim Wilson.

WM David Emery, opened the proceedings and conducted the business of the lodge, before the PrDGDC entered and announced that the principal guest stood without and seeks admission. The WM, having welcomed Jim to Amounderness Lodge, invited him to take the master’s chair for the rest of the ceremony.

In Jim’s opening preamble, he expounded the principals of Freemasonry on which it rests, adding that to have lived by and practised those principals for 50 years is a remarkable achievement and it is only right that we should celebrate Barry’s golden jubilee. Jim asked for the celebrant to be placed before him and having made sure he was sitting comfortably, he began his address by reflecting on the events that were taking place at the time of Barry’s birth in 1940. When Barry took his first breath the country was at war and standing alone. It was the time of Dunkirk and the Battle of Britain. Hitler had ordered that Operation Sealion, the invasion of England, should be initiated and called upon England to surrender, they were dark days indeed.

However, for Jarad and Hilda Seedhouse those dark days were illuminated by the birth of their son Barry. Barry was born at the Maternity Hospital in Newcastle, but the family home was a few miles away at Chester-le-Street, where Jarad worked for the National Coal Board, a vital occupation in war time Britain. While Barry was still very young, the family moved to the small mining village of Kibblesworth, to be near and help look after Barry’s grandfather. It was whilst living in the village and the fact Barry’s grandfather kept horses, that he developed his lifelong love of horses and to this day Barry still owns horses.

After attending the village school, Barry completed his education at Birtley East Secondary Modern School, leaving in 1956 with six GCE’s. After leaving school Barry secured a job as a clerk with William Deacons Bank in Newcastle, but in 1960 had a change of employment and became first the district agent and then the assistant district manager for Pear Assurance in the north east of the country.

In 1961 Barry married Norma and they have now been married for some 57 years. They have been blessed with two children and four grandchildren.

In 1967 Barry returned to banking as a cashier with the Westminster Bank in Newcastle. As Barry’s career prospered he moved first to Liverpool Old Swan, then to Wallasey and then became the administration manager for Blackpool South and Poulton-le-Fylde, which meant moving again to live in Lytham St Annes.

Upon retirement, Barry bought some land and moved to Shropshire, where he concentrated on his horses and took up carriage driving. After a number of years, the family decided to move home and live near their son on the Wirral, but he did not give up on his horses as he still owns some to this day.

It was through his father-in-law that Barry became interested in Masonry and in 1968 stood outside the door of Coronation Lodge No 2929 at Stanley, County Durham, awaiting his initiation. At this point, Jim asked the lodge secretary to read an extract from the minutes detailing Barry’s initiation into Coronation Lodge.

Upon moving to Liverpool, Barry joined Ellesmere Port Lodge No 6126 (which was laid down in 2008 due to decreased membership), but upon moving to Lytham St Annes he had to resign and did not resume Masonry until he joined Amounderness Lodge. Having progressed through the officers, Barry became master of the lodge in 2003, served as treasurer from 2012-2015 and was appointed PPrAssGSwdB in Provincial Grand Lodge in 2011.

For the last 14 years, Barry has lived some 100 miles from the lodge, but has such an affinity with its members he cannot ever envisage joining a different lodge.

After commenting that it had been a privilege to have been part of the celebration for his 50th anniversary, Jim called upon the Lancaster and District Group Vice Chairman Neil McGill to read aloud a congratulatory certificate from the Provincial Grand Master Tony Harrison, before presenting the same to Barry, wishing him health and happiness and hoping that he would continue to enjoy his Freemasonry for many years to come.

At the festive board after the ceremony, Jim rose to thank the lodge secretary Hal Hamer for his efforts in organising the celebration and the acting officers for the tremendous amount of work that they do. Special mention was made of Barry Fitzgerald, without whom the evening would not have flowed as smoothly as it did.

The toast to Barry’s health was proposed by Brian Ekin, who has been friends with Barry since they were eight years old and was at his initiation.

Following the toasts, the lodge senior warden Ian Cuerden, on behalf of the brethren, presented Barry with a pair of Masonic cufflinks, following which the WM asked him to accept a bouquet of flowers for his wife. The WM also presented flowers to Jim as the principal guest, together with a bottle of whisky for his forthcoming retirement as group chairman.

The raffle at the festive board raised £165 to go towards the Masonic Hall Refurbishment Fund.

The brethren of Amounderness Lodge gather to celebrate 50 years in Masonry for Barry Seedhouse.