Companions of Architect Chapter No 1375 were privileged to be regaled with a 60-year anniversary story, revealed in the chapter room in a novel fashion by means of a film show with accompanying music, about Ernest Young, his life and career in the Royal Arch. The story was told by Deputy Grand Superintendent Paul Renton, ably assisted on the evening by Assistant to the Provincial Grand Principles Colin Rowling, Brian Hayes, deputy group chairman Gareth Jones and other distinguished grand lodge officers. 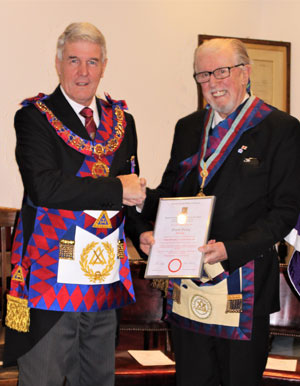 The chapter was opened accordingly by the three principles, David Benson (first principal), Andrew Makin (second principal) and Malcolm Jacobs (third principal) and the initial business of the chapter was carried out. Then Paul Hesketh, Provincial Grand DC entered and informed the chapter that they were to be honoured by the presence of Paul Renton the Deputy Grand Superintendent.

Paul entered the chapter room and accepting the sceptre from David, explained that normally such anniversaries were the prerogative of the Assistant to the Provincial Grand Principles, however, Royal Arch 60th anniversaries were so rare that it had been agreed that he would conduct the proceedings himself but ably assisted by Colin whom he referred to as ‘The Welsh Wizard’ (due to his IT skills)!

The lights were dimmed and Paul began narrating the show which was divided into three sections featuring Bill’s life from his birth in 1924, his exaltation into the Royal Arch in 1958 and finally focusing on his time as first principle of Architect Chapter in 1971, each section being accompanied by slides showing important events that had happened and music which was popular at that particular time.

Bill was born on Wednesday 28 September 1924 and was the youngest of four children, the three elder ones all being girls, and lived in Alstone Road, Heaton Chapel, Stockport. Paul then proceeded to play 10 popular songs of the time and inviting audience participation, asked to identify such standards as Gershwin’s ‘Rhapsody in Blue’, Al Jolson’s’ ‘California here I come’ and ’Somebody loves me’ by Paul Whiteman.

Notable events that occurred at this time were Malcolm Campbell setting a new land speed record of 148 mph, John Logie Baird developing the beginnings of television, Eric Liddell (of ‘Chariots of Fire’ fame) setting a new 400m world record and winning gold at the Paris Olympics and the disappearance of Mallory and Erving on Mount Everest. There were other stars born in 1924 as well as Bill, most notably Benny Hill, Ron (Fagin) Moody, Brian Rix, Tony Hancock, Clement Freud and Kenneth Kendall the news reader.

For his education Bill, attended Rosalee High School for Girls although he was at great pains to explain that there was a private section there which was not just for girls! From here he moved on to Heaton Moor College, Stockport College and finally the Lancashire and Cheshire Institute before going on to work for Manchester Liners Shipping Company. 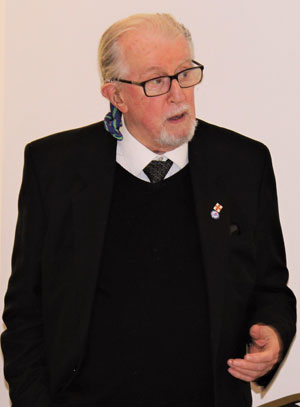 Bill responds to his toast.

Bill’s grandfather, father and two uncles were Masons so it was no particular surprise when his Masonic career began when he was initiated into Stat Veritas Lodge No 6813 in 1956 at the age of 32, a lodge which is now amalgamated with Royal Protector Lodge No 3471 since 2004.

Bill was exalted into the Royal Arch in Architect Chapter remarkably quickly after only two years in the Craft, on the 6 February 1958, a day recorded in history for a much darker reason than Bills exhalation however, it being the day of the Munich Air Disaster in which seven of the ‘Busby Babes’ were killed.

Lightening the tone somewhat, the companions were treated to another musical interlude, with more audience participation being invited to identify classics of the day such as ‘Fever’ by Peggy Lee, ‘King Creole’ by Elvis, ‘Volare’ by Dean Martin and ‘Splish Splash’ by Charlie Drake.

Notable events were the opening of the London Planetarium and the Preston By-Pass, Britain’s first motorway (later to become part of the M6) which initially had no speed limit!

Bill became first frinciple of Architect Chapter on 4 November 1971, which coincided with various events such as the introduction of decimal currency, the opening of the Open University, the Mersey Tunnel and Spaghetti Junction and to cap it all, British Leyland launched the Morris Marina!

Paul then launched the final musical interlude featuring such luminaries as Slade with ‘Coz I luv you’, Rod Stewart with ‘Maggie May’ and Olivia Newton John with the ‘Banks of the Ohio’.

Thus, an unusual and entertaining celebration was brought to a close and Paul invited Architect Chapter DC and South Eastern Group Vice Chairman Gareth Jones to present Bill with his 60th anniversary certificate. Bill then made a generous gesture presenting a cheque for £200 to Masonic Charities.

The companions then retired to the social board and a friendly and jovial evening drew to a close with Ernest ‘Bill’ Young giving heartfelt thanks to all present and particularly those who had organised such a novel film show on his behalf and all those in attendance giving him a deserved round of applause! 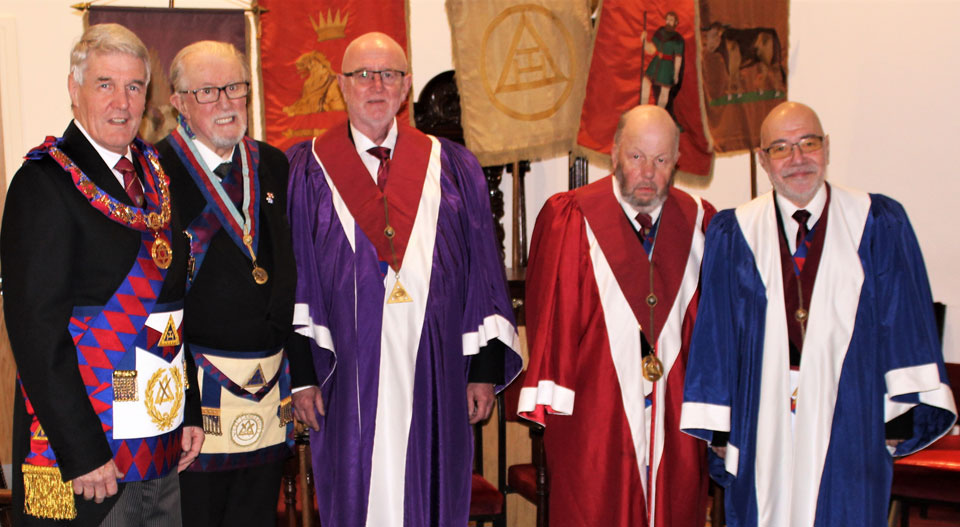